For the third day in succession, it has been raining Cats and Dogs!

Hmmmm. I wonder why they say that. I haven't seen any furriends falling out of the sky - but there sure has been an AWFUL lot of skywater. The Kinneret (Sea of Galilee) rose 5cm last night, thanks to the steady deluge.

And it's coooooooold! Tonight, for the furrst time this winter (if We are not mistaken), the tempurratures are set to fall below zero! Brrrrr!!!!! That's a whole lot of Cold. We shall snuggle up with Mummy under the duvet and try to remember that tomorrow is Tu b'Shvat, which is supposed to herald the coming of Spring. It will help if the Weather Prophets are right and the rain stops late this afternoon.

Here I am, then - The Mighty Shimshon (Shimshi for short) aka The Little Purrince, Furrst of My Name, Stealer of Hearts, Master of the Queen's Mischiefs, and Captain-of-the-Guard. 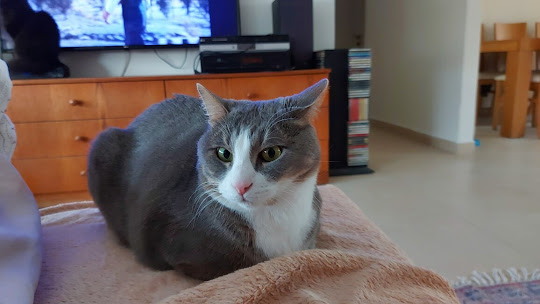 And here are two versions of My Artified Self - both created with the help of LunaPic.  The furrst one uses the Crayon filter at 80%, with an overlay of Sadness (because of the depressing weather) at 25%: 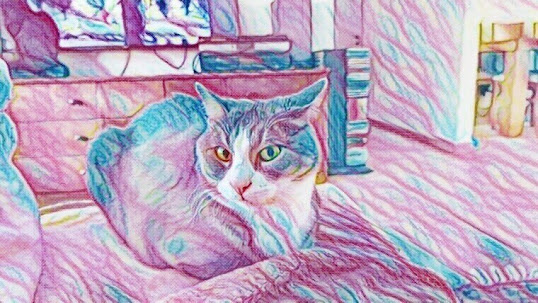 Then We tried Sunshine (which We are all longing for), also at 80%, with an overlay of Flowers at 40%, in honour of Tu b'Shvat: 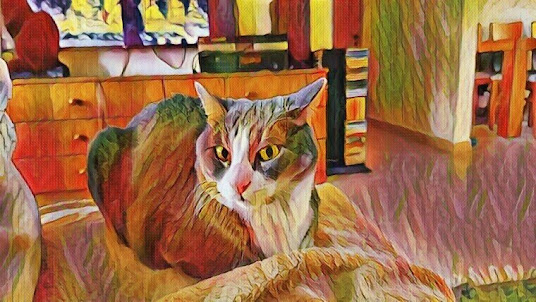 And how could We fail to mention the Evil Old Coronavirus, about which Mummy had a rant in her own bloggie last Fursday and the week before that and will almost certainly have another rant about later this week too?

It seems the Evil Ninja Mutant Omicron has spawned a sub-species but nobody knows yet whether or not it will prove more, or less, dangerous than Omicron. What does seem to be happening is a huge spike, not only in the numbers infected by the virus (which variant, We don't know), but also in the numbers of seriously ill - and that includes people vaccinated with four shots. What they are not telling us is, how many of these are people with existing serious health issues.

At any rate, even though there is no direct government instruction to do so, Mummy's Bible Studies class has moved over to Zoom, and her Caterwauling Club is holding rehearsals in a hybrid form - in person for the Brave and via Zoom for the Cautious. Mummy is one of the latter, We are thankful to say.

We hope you and your Humans are also being Cautious and taking effurry Precaution against the Evil Pestilence.

We have had so much rain this winter but at last have had 3 dry days. These mutating variants are such a worry. I have a lot of serious health conditions so remain very careful. I have been double masking with a blue surgical mask over a cloth mask, but have now been able to get N95 masks which are supposed to be very effective.
I like both of your art versions, but I think the second is very slightly my favourite.

Shimshi, you look great, as always! We have been hearing that it's been raining lots there in Israel. Is it true the Kinneret still needs some more rain to be full?

Well, we, too, are unhappy with OhMyCron! BUT that sad overlay made you so beautiful and colorful that we cheered up! We don’t know about four shots…we have had only three and the fourth is not out yet, as far as the news we have reports. I do hope there will be a specific shot for the variant, as it’s in the works. Thanks for visiting us and merci for the nice words.

You did a fabulous job with your artwork!!! We hope everyone stays safe.

Both are lovely but the second one is our fave x

My, Shimshon, you do look most happy and comfy there. Clearly the cold snap wasnt around. We have a cold snap too, though less rain and no rivers.
Always best to play and study safe. We do too, and pray each day our measures and vacines will be enough.
Purrs to you and your staff team
ERin

There are SOO many diagonals in that first filter portrait aren't there!! Did it surprise you? I know sometimes I add a filter and go OMG what happened LOL!!

Stay dry, Shimshi! You are looking quite handsome in your selfie and we like both the artworks. Have a great Sunday and week!

Mighty Shimshon (Shimshi for short) aka The Little Purrince, Furrst of My Name, Stealer of Hearts, Master of the Queen's Mischiefs, and Captain-of-the-Guard! We hope you and the rest all stay warm! We are having regular winter weather this last week which has made us most happy. We too are being affected by the Omicron and are hoping that it peters out. Things are getting scarce in the stores. Its a good thing Mom bought us extra food! We LOVE your Selfie and Our favorite is BOTH pieces of art! They are TERRIFIC! We hope you guys and your Peep have a marvellously happy week!

You are so handsome. Nice selfie. I like both, but the first is my favorite with the pastel colors. XO

Lovely arts this week! Mom thinks we'll never be free of covid, we just hope it stays in a mild form. They're still cautious about where they go out. They'll do lunch in a restaurant if it's not too crowded but otherwise won't go into crowds, even vaccinated & wearing masks.

You sure nailed the wonderful selfie and fabulous art Shimshi, bravo!

Beautiful photo and art! Seems the weather is crazy everywhere.

I think I commented but can’t find it! BEAUTIFUL that first one, not sad at all…

Shimshi, that's a great selfie, and of the two artified pics, we prefer the second, just because it looks so WARM. Right now in our part of Ontario, Canada, it's freezing and we're having a massive snowstorm, with a foot of snow, possibly more, before it's over. We will be waiting a long time for spring here!

Take care and we hope you have a great, sunny week!

A very handssome selfie, Shimshi, and we like your art, too, esp the sunny one! Nice warm colors:)

We are so tired of this virus, and the way it keeps trying to doge our vaccines by changing itself...phooey!

What a nice selfie, Shimshi! And your artwork is lovely. I hope the rain has stopped now. It's freezing here too. I wish it was spring! ~Ernie

dood.....ewe look most handsum in all yur selfeez but we gotta got with R fave az yur original :) ☺☺ we hope de rainz haz stopped....itz crazed cold heer two and ice waz all over de streetz and stuffz thiz morn....YEOW....knot good.... heerz two a happee healthee week for everee one ♥♥♥♥♥☺☺☺☺

Both artworks are marvellous, we especially like the crayon filter, because of the colour😸Pawkisses for a Happy Hump Day🐾😽💞

Shmshi yore so hansum! Wee love yore selfie an THE 2nd arty foto bestest!!
And we know where THE sayin "Rainin Doggiess an Kittiess" come from!
It goess back to Norse beeleefss....butt mee not go that far....
Inn THE U Kay when it raiend so hard Doggiess an Kittiess wuud go up innto barn an house rafturss to avoid getting wet down bee-low!
Sorta kewl rite?
As fore Ommycron it iss here inn Catnanda alltho wee apposta to have only 2 cases of it'! There are allmsot 20 peepss inn Hospital...wee are only told daily number of cases inn our 2 Countiess an THE mew daily toe-tal. No one knowss what to think!! It iss so confusin!!
Wishin youss' a lovelee Tu'Bee Shavat!
***nose kissess*** BellaDharma an ((huggiess)) BellaSita Mum

We are just glad TBT stays at home almost all the time and wears a N95 mask once a week to food-shop! He does that ta protect US of course. Every Bein should do that. We wouldn't want him to bring a disease ta US, after all.