That is how Pixie and Possum, who came before Us, used to greet their readers. We are doing it also, because today's post is dedicated to the memory of Pixie, who flew away to The Rainbow Bridge six years ago come Shabbat, on December 23rd, 2011.

As you already know, We neffur had the purr-ivilege of purr-sonally meeting Princess PixieCato, as she was known. She left for The Bridge before any of Us were even born, leaving Mummy, and her brofur Possum, heartbroken. But Pixie wouldn't want Mummy to remember her with sadness. So, as is Our Custom, rather than mourn her passing, We are going to celebrate her Life, as Mummy shows Us pictures of Pixie, and tells Us stories about her. The History of Those Who Went Before is part of the Heritage of effurry Cat.

Many of the best pictures of Pixie were taken before the Digital Age and it is furry interesting to help Mummy go over her old photo albums and pick out pictures purr-inted on glossy paper, taken way back in the day when humans took pictures on film, which then had to be taken to a special shop and "developed"! Imagine that, kitties! Who would have believed humans could have been so purr-imitive (mol)!

But We digress.
Like all of Us, Pixie was furry tiny when she came to live with Mummy. Mummy was looking for a companion for Possum, who had already chosen Mummy, a few weeks earlier.  She was one of four litter-mates, and her foster-Mum called her Elsa. But when Mummy met her, Pixie whispered to her that her real name was Pixie.

And so it was.

This is a furry early picture of Pixie, wrestling with Possum - who let her beat him (that didn't last furry long). 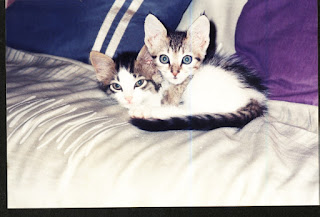 As you can see, this is one of the early, non-digital photos that Mummy had to scan into her computer. 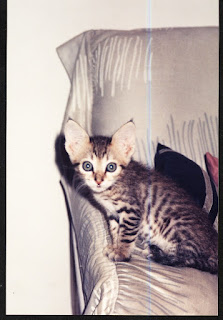 After they grew up, Possum, who was bigger and stronger, used to win most of the wrestling matches However, Pixie did manage to retain her pawsition as Queen of the Castle: 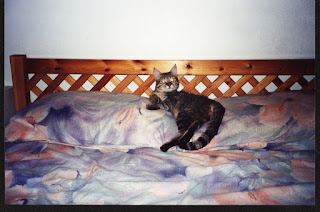 Mummy's favourite picture is the one of Pixie and Possum that She uses as the banner for Her Own Blog.

Pixie was a great believer in keeping fit and would exercise regularly, in order to preserve her svelte, ladycatlike figure: 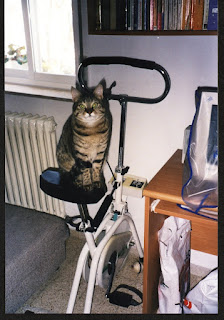 On the other hand, she was also a great believer in snoozing (as are WE!): 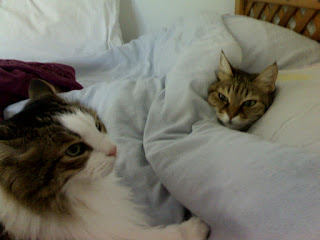 When she was a young ladycat, like so many teenagers, Pixie used to spend what Mummy thought was rather too much time watching TV: 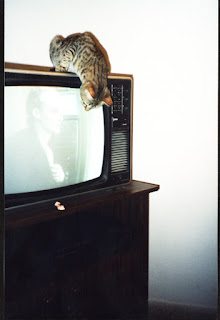 However, she grew out of that, and developed Other Purr-suits. For example,
she loved shopping: 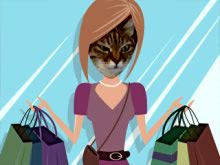 When necessary, she could be fierce: 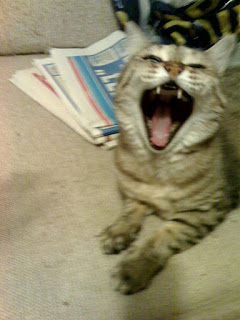 But mostly, she was Regal: 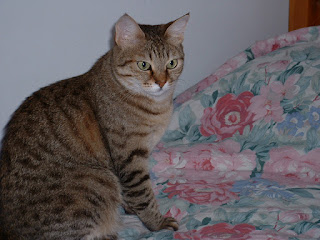 This is one of the last pictures Mummy has of Pixie, taken three weeks before she left for the Rainbow Bridge. She was already furry sick by then, but it doesn't show so much in this picture. Mummy has later pictures, right up to Pixie's last day with her, but they show how sick Pixie was, and they make Mummy's eyes leak so much that she can't bear to look at them - yet she can't bring herself to destroy them. So We won't post them, and We will leave you with Two Pixies, in a sunpuddle. Pixie adored sunpuddles. 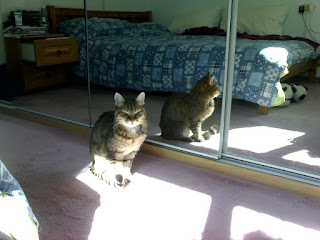