Yes! It is I, Queen Trixie, Empress of Jerusalem, Israel and the Entire Middle East, Guardian of the Boudoir, Alpha Kitty Extraordinaire!

I know, I know, it has been a whole month since any of Us blogged, and even longer since My Imperial Majesty graced you all with my Royal Presence.

It has been so-o-o-o-o hot that none of Us really had the Energy to sit down at the Computer Machine Thingy and write, but Mummy reminded Us that We haven't even updated you on the Results of My Surgery and We really ought to do that, at least.

Well, it turned out that Mummy was Absolutely Right. They did leave some bits in three years ago when they furrst tried to steal my Ladycat Parts. I won't go into details, because it's not Ladycatlike to discuss such things in public. Suffice it to say that We all hope they've done it propurrly this time.

When Mummy went to collect Me, after my surgery, the nice lady v-e-t gave her a Wink and asked her if She wanted the Good News furrst, or the Bad News. Mummy didn't know what to say, so Dr. Einat said: "The Good News is that you were right. We didn't get it all out last time. So We found it quite easily."

Anyway, after Mummy took Me home, she fed Me but it must have been too soon, because I was sick and horked up the lot. And then I didn't want to eat or even come out of my kitty-cave all the next day. I did nothing but sleep.
And Mummy was effur so worried, She took Me back to the v-e-t. Dr. Einat fed me some special food with a spatula - food for sick kitties who have lost their appetite - and gave Mummy some to take home for Me. And She didn't charge Mummy for that either.

After that, my appetite started coming back - quite quickly, in fact. By the time I had my stitches out (actually, they were staples), I was even eating more than I had been used to before my surgery.

This is my Tummy with my stitches staples: 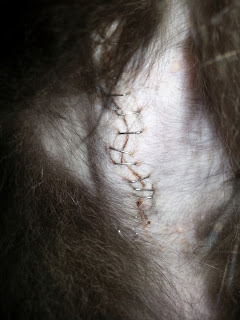 It looks awful, doesn't it?

It took weeks before all my beautiful furs grew back propurrly - and when they did, the undercoat of white furs was much more pronounced than before.

After I was fully recovered, I began the process of reconquering My Territory.
Furrst of all, I made it clear to Mummy that, just because Shimshi likes to eat computer cables, that is no reason to ban Me from the Library/Study - which was one of my favourite haunts when I was a little kitty, before the Mancats came along: 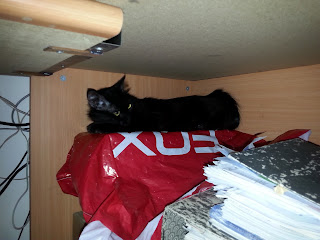 Next, I made it clear to my brofurs that I do not appreciate being woken up to join in their boysterous games of Catch-Me-If-You-Can (especially since they seem to think that I am always the One To Be Caught): 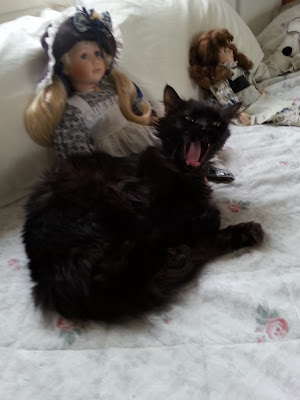 Once That Lesson had been learnt, I allowed them to snooze on the Bed or Sofa together with Me: 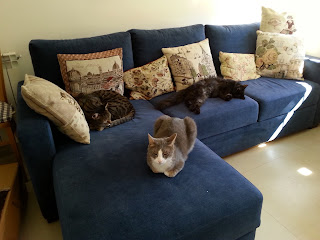 So now, Things are more or less back to normal.

Before I go, I want to show you all this picture Mummy took at the Supermarket last week. 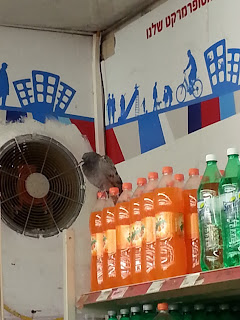 No, your eyes do not deceive you. That is, indeed, a birdie!
You might well ask - as We did - what a birdie is doing inside the supermarket.
Mummy thinks it came indoors to enjoy the Air Conditioning and escape the Extreme Heat outside.

Hmmmm - We told Mummy that, next time, She should take Us to the Supermarket with her to help her with the shopping (heh heh heh)...