Time to Get Transcendental

Today is the start of the school year here in Israel and all the two-legged kittens are going back to school.

We kitties are still enjoying our summer vacation, until September 1st, and then it's back to our studies. I (Trixie) will be teaching my (not so little) Brofur Caspurr (he's bigger than Me already!) the Basic Principles of Transcendental Meditation. As you know, the Most Impawtant subject of study for a kitty is the Art (some call it a Science) of Meditating upon his or her Own Name. Not his or her  regular, everyday name, by which he or she is known to his/her Humans, and not even the name by which s/he is known to other cats. No. I am speaking of the cat's secret "ineffable. effable, effanineffable, deep and inscrutable singular Name", which is known only to the Cat. If your Humans have read "Old Possum's Book of Practical Cats" by a Human called Mr. T.S. Eliot, or seen the mewsical "Cats" by Mr. Andrew Lloyd Webber, they will know what We are talking about.

Of course, I can only teach Caspurr the Basic Principles and give him a few pointers. The rest, he will have to learn by himself - as will I. Meditation is a Lifetime Study and cannot really be taught. It has to be experienced to be understood. But, once mastered, its Benefits are incalculable. Not the least among them is that a better way to totally baffle Human observers has yet to be devised (mol).

Meanwhile, We are off to enjoy what's left of the Summer... 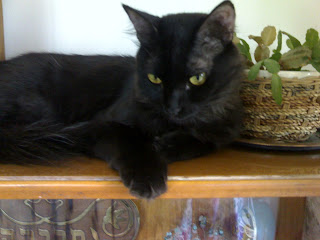 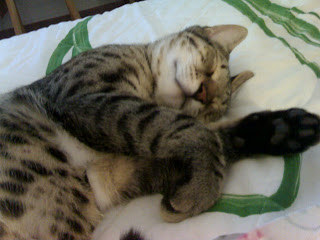 Black Cats of the World, Unite!

This is our fourth post this week! But Mummy wouldn't help us till she had finished her Own Blog, because she said We had already posted THREE TIMES this week and now it was her turn. Imagine such selfishness! As if her scribblings about Mewsick could be as Impawtant as what We have to say!

Kitties! Today, August 17th, is Black Cat Appreciation Day. This is a Special Day for Black Kitties, such as Myself (Trixie). Did you know that Black Cats are often the last to be adopted, and are often put to sleep because homes cannot be found for them? And why? Because of some silly superstition that We bring Bad Luck. At least, that is what they believe in America.

Mummy can't understand this. In Britain, where she was born, Black Cats are believed to bring Good Luck.

Furthermore, in Ancient Egypt (where they knew a thing or two), black cats were believed to purr-sonify the goddess Bast, and thus, to bring Good Fortune. Those Ancient Egyptians had the Good Sense to worship Us and anyone who killed a Cat was put to death for sacrilege.

So let's hear it for all the Black Kitties of the World.
I ask you - do I look as if I would bring anything but the best of luck to anyone who had the good fortune to meet Me? 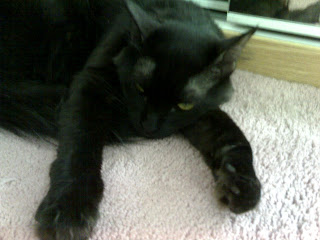 So, if you're looking to adopt a kitty - go out and get a black panfur :-)

Have a lovely weekend


P.S. I second that - although we Tabby Tiggers are also pretty cool ;-)

The (Not so) Glorious Twelfth

First of all, thank you to effurryone who came to My Birthday Pawty yesterday! And a special thanks to Caspurr for all the hard work he put into organizing it. And special thanks to Mummy too, for doing the CATering.

Now, to something effur so impawtant. As a kitty who celebrates her birthday on August 12th, I naturally assumed that, when they talk about "The Glorious Twelfth" in Britain (where my Human was born), they were re-furring to My Birthday. But no! To my absolute horror and disgust, it turns out that "The Glorious Twelfth" is what they call the opening day of the Grouse Shooting Season. For those kitties who don't know what a grouse is - it's a kind of Birdie. And Humans are only allowed to shoot them during certain months of the year. I suppose we should be grateful for small mercies. But when they are allowed to shoot them, boy oh boy do they go crazy!

I know, you are wondering why killing birdies of any kind should bother a Mighty Huntress such as Myself. But that's just it, kitties and woofies! I am a true Huntress. I know how to stalk and creep up effur so quietly and then pounce.
But this is something completely different! Imagine scores of grown men (sometimes, with the assistance of Woofies - who should be ashamed of themselves) with Guns, who are much too cowardly to take on these poor birdies as We would, Cat to Bird, or rather, Man to Bird, but instead, kill from a distance. No skill required there - besides which, it gives a TOTALLY UNFAIR advantage to the Humans. Moreover - this could be the Thin End of the Wedge. First they kill Birdies (which, in any case, is OUR purr-ogative), then foxes, then Big Cats such as Tiggers and Panfurs and Lions - and the next thing you know, they'll be shooting Us. And all that, in the name of what they call "Sport". You know what that means, kitties and woofies? KILLING FOR FUN. Not for food, to survive, but just for FUN.

No other species does that.

Well, it's finally here! My first birthday! And see what Mummy got me - a darling little mousie! 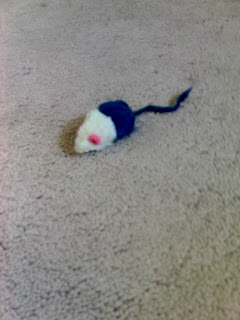 I think it must have something in it, it smelled so good. Maybe it's that nip thing you all talk about. All I know is, I just loved it!

See, here I am playing with it. 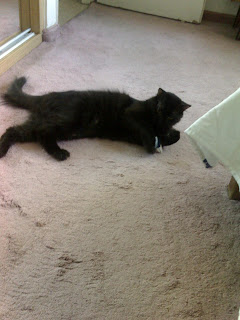 I know it's not a very good picture. Mummy took it with that thing she talks into, because it was the nearest camera handy, and, of course, I was wriggling about all the time. Did she think I was going to stop and pose for her, when I had my lovely new mousie to play with? Think again, Mummy!

Of course, we had to hide it before Caspurr came out of his bedroom, because he steals all My Toys. But I can't exactly remember where we hid it. That's the trouble when you let a Human help you hide things (mol). I shall have to conduct a serious search tonight, after Mummy has put Caspurr in his private apartment and She herself has gone to sleep. Then, I shall search for it and when I find it, I shall bring it to Mummy and triumphantly announce the results of my search.

Kitties - (and woofies too) - I think Caspurr and Mummy are up to something. I keep seeing them whispering in corners when they  think I'm not looking/listening. I've heard them mention "5 o'clock" several times. There may be some kind of conspiracy against Me going on. But surely they wouldn't do anything to Me on My Birthday, of all days, would they?
Okay, no time to chat now. I must conduct further investigations.

Trixie the Puzzled Birthday Panfur
Posted by The J-Cats at 12:39 PM 12 comments:

Caspurr here - with the best of all possible news!
Today, I finally received my Birdwatching Licence. I have successfully completed my internship and I am now a Fully Qualified Birdwatcher.

Look, here I am with My Licence: 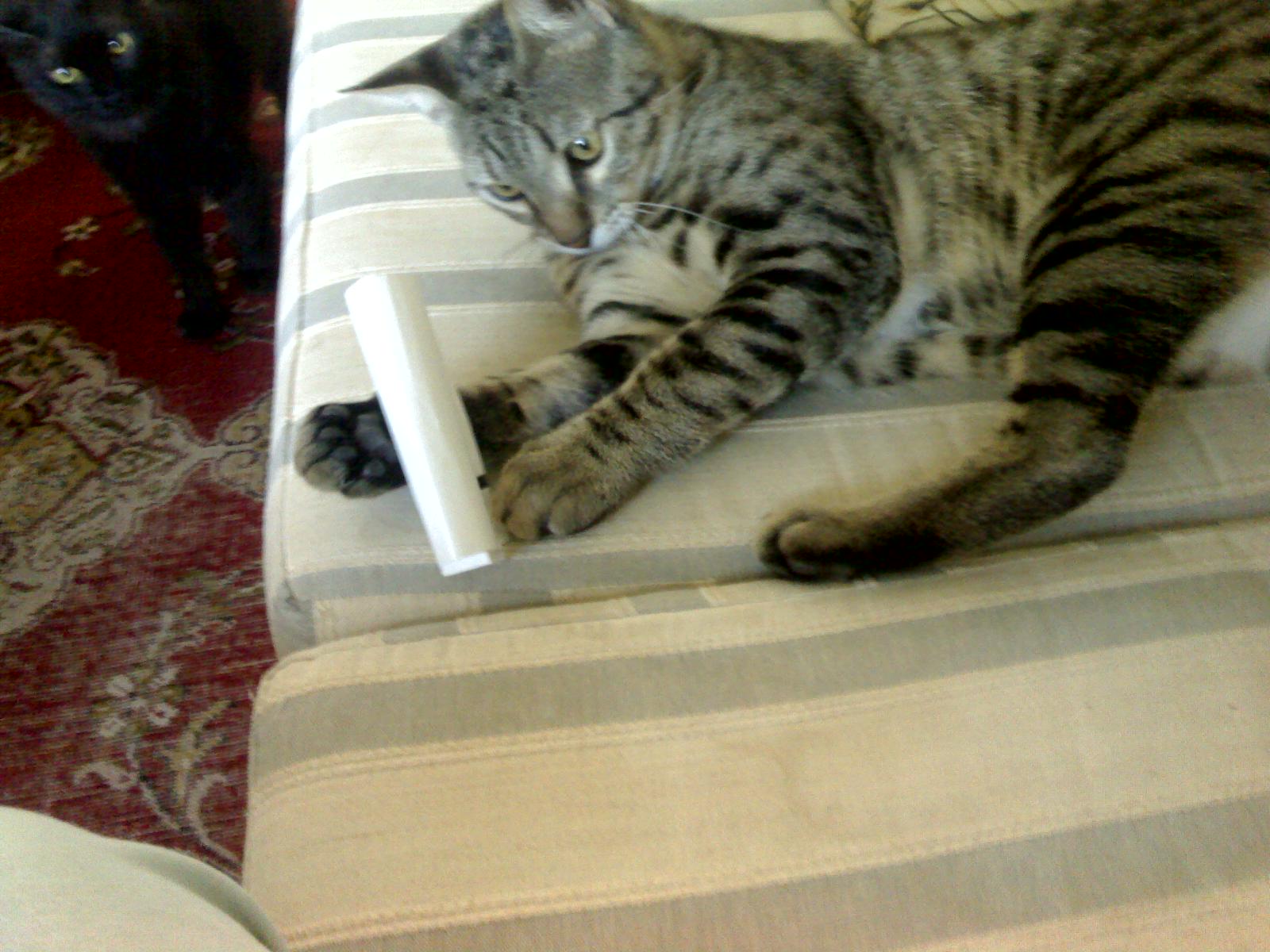 This afternoon, we shall have a small reception, just for the family,  to mark the occasion.

Now (whispers) - this is a Big Secret. Tomorrow is Trixie's first birthday. 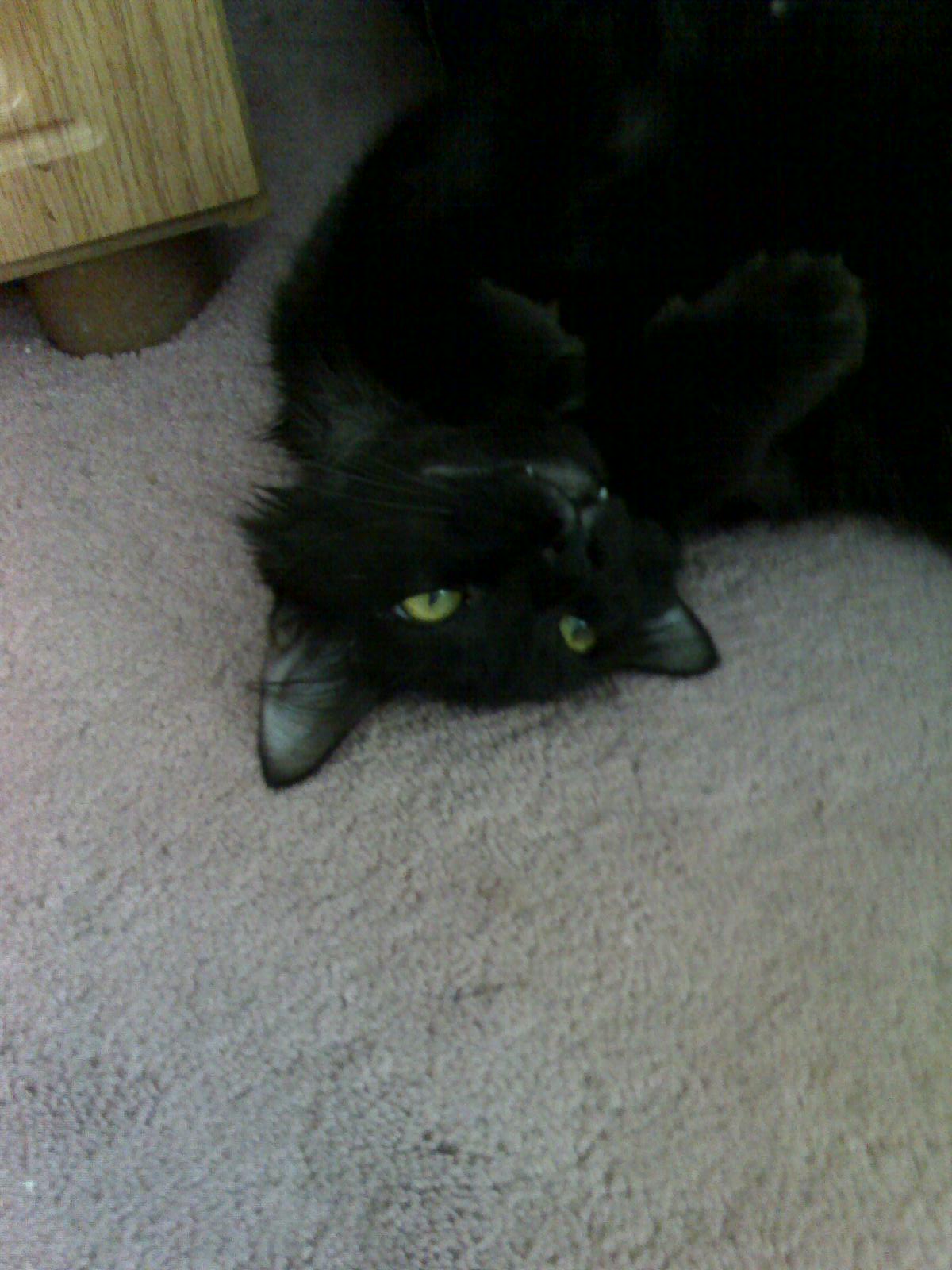 She will be one year old. Mummy and I are preparing a Surprise Party for her. There will be lots of delicious noms, such as salmon and tuna and chick-hen and all my our Trixie's other favourites, which will be prepared by the caterer Mummy. You are all invited, so get your Tunnels and Teleports ready and powered up and we shall be looking forward to seeing you here tomorrow afternoon at 5 pm Jerusalem time.