It's Me here again, the Mighty Shimshon (aka Shimshi), also known as The Little Purrince! 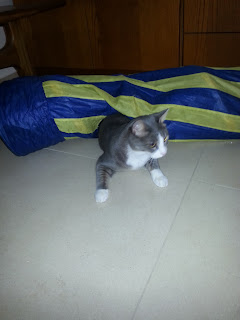 How are you all? Are you having horrid, cold weather with water falling out of the sky, like We are? In fact, earlier this meouwning, there were tiny, hard, cold, icy pellets falling down as well! We don't like that - but at least, We don't have to go out in it. We have plenty of Hard Work to do here indoors, without getting our beautiful furs wet.

And speaking of Hard Work - I want you to know that I have been taking My Duties as Master of the Queen's Mischiefs furry, furry seriously. In fact, I often use the Transporter Tunnel to visit and consult with other Mischief-Makers, for a furr-uitful exchange of ideas.

And I must say,  Uncle Messi the Woofie has some really good ones. I tell you, that Woofie must have Feline Genes in him somewhere (mol)! How else could he have come up with something like This? 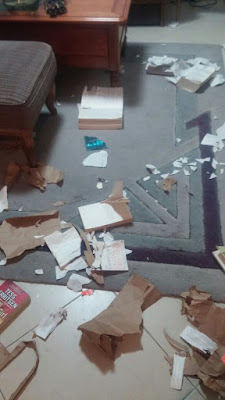 I tell you, anipals - that Woofie is an Inspurration (mol).

Now I am must go and snoopervise while Mummy prepurrs Her, Our, The Shabbat Meal. Have a great and Mischief-filled weekend, all of you. 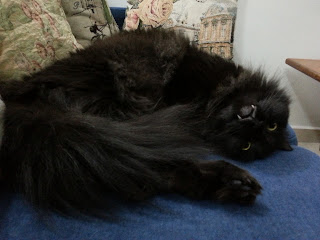 This is going to be furry short because Mummy has an injured eye and so She doesn't want to sit too long typing at the computer machine thingy.

How did Mummy get an injured eye? Well, One of Us (I won't mention any names, but it wasn't Me) carelessly shoved Mummy's Mobile Talking Device right into her eye. Result - bleeding into the retina, which the Eye Doctor says should clear up on its own in ten days or so.
I told those boisterous Mancats not to be so rough in their games and not to go running about right in front of Mummy's face, but do they listen to Me? Their Queen-Empress? Oh, no - of course not!

And Shimshi, who is a furry naughty baby mancat, compounded his Transgression with Mummy's handbag, by chewing holes in the nice blankie that looks like Caspurr's tummy spots. I don't get it. He will chew on just about anything!!!

Since the weather turned really, really cold a couple of weeks ago, We have been doing a lot of Snuggling with Mummy - who even bought a new Snuggle-Blanket for curling up under with Us, while watching TV. However, last week, She deserted Us for a Whole Day to go on one of her Field Trips, which She has once a month or so. We don't like it when She is out all day. It's bad enough when She shuts herself up with the Computer Machine in the Study and doesn't let Us in because of Shimshi chewing anything he can get his teeth into, including electric cables. At least We know She is there and that, if We sing the Song of Our People loudly enough, She will come out and feed Us, or pet Us, or play with Us. But, as I said, once a month or so, She has these study trips when She is out all day. Still, when She gets home, She feeds Us straight away and then She tells Us all about where She has been.

Caspurr and Shimshi wonder if you, too, would like to hear about what Mummy does on her field trips?
You do?

Well, She writes about them on her own blog, so you can read all about it and see the pictures for yourselves.

I have to say, all that touring sounds furry strenuous and energetic to Me. Don't you agree?

Well, that's all for now, Anipals. Time for LUNCH with my fursibs. 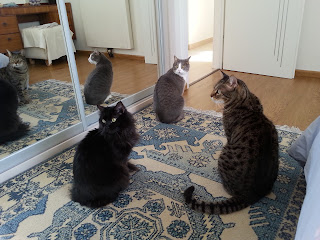 Furrst of all, a quick update on Uncle Messi the Woofie.
Mummy went round to visit him and She reports that he is purr-gressing well, he is gaining confidence daily, and (according to Grandpa), he has also gained weight. Mummy says She can't see it, and that he still looks woefully thin to her, but Step-Grandma reports that he will eat just about anything (mol). He sleeps on his Own Armchair and effurry night, at bedtime, Step-Grandma covers him with a blanket. He would like to sleep on the living-room sofa, but that is not allowed. As you can see, being a Feline has its advantages - one of them being that We sleep wherever We please  and no mere Human is going to tell us otherwise (mol) .

Here is Messi, on his Armchair: 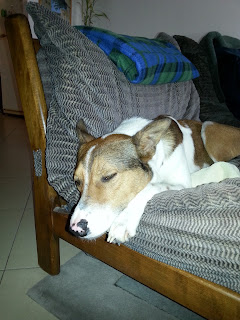 Naturally, you all want to know about his attitude to Cats. Well, according to Step-Grandma, when he meets them out on his walks, he turns his head aside and pretends not to notice them. But there is a certain kitty who comes regularly to the kitchen window when Step-Grandma is cooking, whom Messi regards as an Intruder (although She was there long before he was) and sometimes (though not always), he barks like crazy when he sees her. Of course, We don't know if that is because She is a kitty, or simply because She is an Intruder. Honesty compels Us to admit that We, too, would not take kindly to a strange kitty Invading Our Space.

Mummy's cleaning-lady brought another prezzie for Shimshi Us - a stuffed white mousie with a big' fluffy tail:

As usual, Shimshi decided it was his own purr-sonal purropurrty. That baby mancat definitely has  - issues - when it comes to sharing!

Caspurr has been furry brave lately, venturing forth even when the Cleaning-Lady comes, and so he has been purr-moted to the position of Commander-in-Chief of the Imperial Guard.

And since Shimshi is so furry clever at inventing and devising all kinds of New Mischiefs, a special position has been created for him also - as you will see at the end of this post.

Now all that is left is for all of Us here to wish all of you there (wherever that may be - mol) a furry Happy New Year.

Queen Trixie the Black Panfur, Empress of Jerusalem, Israel and the Entire Middle East, Guardian of the Boudoir, Alpha Kitty Extraordinaire;
Feline-Marshal Caspurr the Courageous, King of the Tigger-Tabbies and Commander in Chief of the Imperial Guard;
The Mighty Shimshon (aka Shimshi), the Little Purrince, Captain of the Guard, and Master of the Queen's Mischiefs;
Shimona from the Palace (aka Mummy) 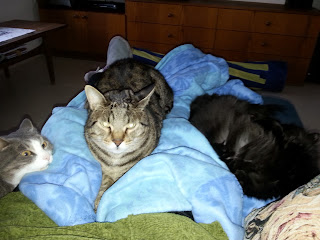