Mummy had the sads yesterday because She was remembering Possum, who came before Us and who flew away to the Rainbow Bridge exactly three years ago yesterday, on October 21, 2012.

We have heard a lot about Possum. It seems he was a furry special kitty and it's sometimes quite hard to live up to his Legacy, but We do our best. We think Possum would have been proud of Us and we are sure We would have liked to know him.

Anyway, as is her custom on this day, Mummy was looking at pictures of Possum and telling Us stories about the things he and Pixie used to get up to. We like hearing these stories. They are part of Our Heritage.

Here are some of the pictures Mummy showed Us yesterday: 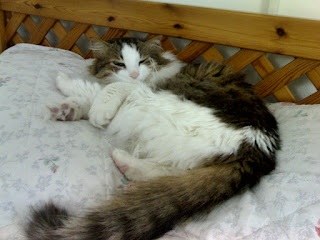 This picture displays the magnificence of Possum's tail. Mummy says that, in some ways, Trixie's tail reminds her of Possum, not in its colour but in its floofiness and its stripiness..
What do you think? 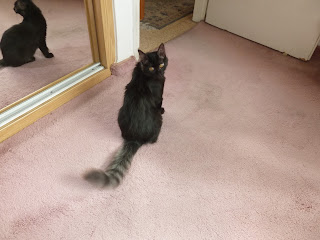 Mummy also finds similarities between Possum and Caspurr, who, although he bears a greater resemblance to Pixie in the colour of his furs, is a Gentle Giant, like Possum was, with HUGE, soft paws.

Here is Possum, in the foreground, together with precious Pixie: 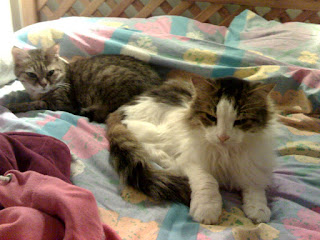 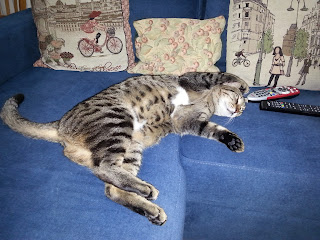 See what we mean about the paws (mol)?

And, of course, Shimshi also has a lot in common with Possum. Both were rescued by Step-Grandma and brought to Mummy at a moment's notice, when She wasn't expecting or intending to be adopting any new kitties that day! And both were covered with fleas (mol)!

Here is Possum the day he arrived: 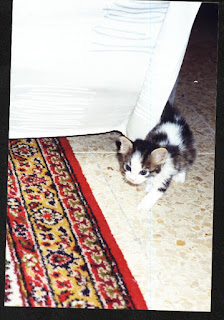 And below is a picture of Shimshi, shortly after he arrived in what was to be his furever home: 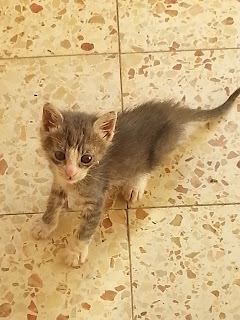 So, you see, the Chain remains Unbroken and We Three are carrying on a Proud Tradition.

We want to share with you something that is giving Us a lot of a-n-x-i-e-t-y. That's a new word We have learned this week, and it means We are furry, furry, furry worried.

Why are We worried?

Well, We saw on the Big Flat Screen in the living-room that there are some terribly evil Humans who are going around attacking good Humans like our Mummy with knives and axes, and have even managed to send some of them to the Rainbow Bridge.

These evil Humans have attacked Old People and even Human Kittens!
Mummy has written about it in her own blog.

We don't want Mummy to go out. Effurry time She goes out, we are afraid She might not come back. We are afraid the Bad Humans will get her. We worry and worry till She comes safely home. What would We do if anything happened to her? Who would feed Us and look after Us.
(And besides all that - We love Her furry, furry much. But don't tell Her that...mol.)
Sometimes, We get so anxious that We even curl up together on the Same Sofa, so We can draw comfort from each other! 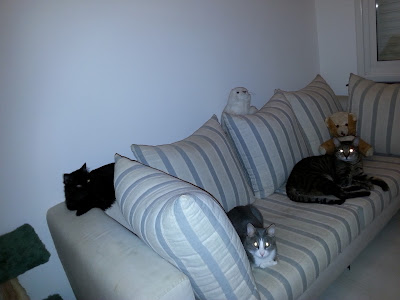 Why does She need to go out, anyway? She has a lovely Home which we share with her, and She has Us to keep her company.

What more could any Human ask?