The Return of the Olympians

Well, we had a great time in Rio, at the Cat Olympics, but it's good to be back. There's no place like Home, after all.

And, of course, it's high time We updated you on Our Success.

First of all, despite furry stiff competition, Our Team walked off with the Gold Medal in the Synchronised Sleeping event. An extra special round of appaws goes to Trixie, who not only captained the Team, but was also Head Coach.

Trixie also took part in two other events. In the Counter-to-Cupboard Combined High Jump/Long Jump, her eye infection affected her co-ordination and she narrowly lost out in the battle for furrst place and was forced to make do with the Silver Medal. However, she more than made up for that with a stunning win in the Ladycats Smackypaws Boxing CATegory, earning a well-deserved Gold Medal. 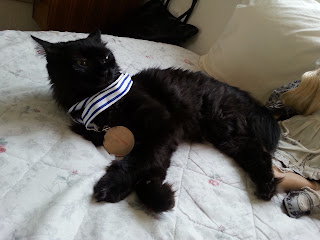 Caspurr defeated a Purr-sian cat who refused to shake paws with him after the contest, to take Gold in the Bunny Kick-Boxing event. The defeated Silver Medallist afterwards apawlogised, privately, explaining that his Humans had warned him that he was on no account to speak to Israeli cats, on pain of being deprived of all treats till the next Cat Olympics! Under the circumstances, Caspurr furr-gave him, of course. But what horrible Peeps that kitty must have! Can you imagine how much nicer the World would be, if We Felines were in charge?

Finally, on the last day of competitions, Shimshi led Our National Team to victory in the Pawball Finals, thereby earning his second Gold Medal.

Appaws, appaws to all of Our Olympians (even though Trixie was the only one willing to pose for a picture with one of her medals).

And appaws, appaws to all those who competed, whether they took home medals or not.

You are all Champions!

Today, August 17th, is Black Cat Appreciation Day (in the US, at any rate). I, Queen Trixie, Empress of Jerusalem, Israel and the Entire Middle East, do not live in the US, but I have many, many furr-iends there, and I would like to wish them all the best on this Auspicious Day.  As you know, in the US and some other places (although not in England, where our HuMum was born), black kitties are considered to be harbingers of Bad Luck and so they are less likely to get adopted and more likely to be (whisper) put to sleep and so Humans who love kitties invented this special day to tell effuryone how Wonderful we House Panfurs are and why they should adopt Us.
Naturally, as a Black Panfur myself, this day is a furry impawtant one in my eyes.

Ah. Yes. EYES.
And that brings Me to the reason why, despite the Auspiciousness of the Occasion, I am not feeling furry happy today.

You see, Mummy noticed that my eyes seemed to be a bit teary of late, and on Sunday, she gently mopped the corner of one eye with a piece of white tissue and was horrified to see that the tears appeared to be mingled with blood. So she scooped Me up and carted Me off to the Evil Stabby Place, so that the nice Lady     v-e-t could take a look. And Sure enough, Dr. Einat found an infection. In fact, she said that my lower right eyelid had turned in on itself and my eyelashes were irritating the eye and making the infection worse. So she turned the eyelid out again and put in two tiny staples to keep it the right way, and said that, if I didn't have them out beforehand, she would remove them in a couple of weeks!

But then Mummy said She was afraid I would pull them out and tear the delicate flesh around my eyes so the Evil v-e-t  said She would put a collar round my neck to stop Me doing that.

Kitties, that was Definitely The Final Straw. I saw them taking out the Cone of Shame and prepurring to put it around my Queenly Neck and I decided that they had reached The Limit. I mean to say, Kitties - Enough is Enough.
It was time to Put My Paw Down. And I did, Kitties. In Spades!!!

So, here I am, kitties - still stapled, but (breathes a sigh of relief), uncollared: 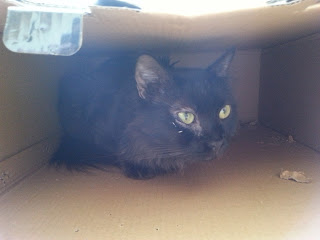 I know, kitties, I know. Dreadful, isn't it. And it was a bit uncomfortable at first, but I got used to it and I even let Mummy put ointment in My Eye three times a day without any too much Fuss.

Now, I am going to let Caspurr and Shimshi tell you the rest of the News.

Thank you, sis Trixie! Okay, Mancats here - Caspurr the Tigger-Tabby King and the Mighty Shimshon aka Shimshi, the Little Purr-ince.
We want to tell you all how We purr-tected Mummy last night.
When Mummy is asleep, We patrol the house, to make sure no Evil Predators get in and hurt Mummy. We don't make a Song and Dance about it, We just get on with it. We usually don't even report to Mummy, so as not to furr-ighten her.

Well, last night, We caught an Evil, Vicious Cockroach who had invaded Our Territory!
Now, Mummy hates roaches just about more than she hates anything, so We hunted it down and We dedded it and then We gobbled it up, because roaches make a nice, crunchy snack and, as you know Mummy has been starving Us, put Us on a Strict Weight-Reducing Diet (especially Caspurr). Only, for some reason, we find the Hairy Legs less digestible, so one of them was accidentally left in the middle of the living-room floor, where Mummy found it in the morning. Of course, she immediately recognised it for what it was and after loudly exclaiming "Oh, no, no,no!" repeatedly, She turned to Us and told Us what Good Kitties We were for having dedded that nasty old roach.
Then she began rushing around spraying insecticide effurrywhere where roaches might be lurking (like under the sink and round the washing machine in the utility room). We understand why, but We would prefurr her to be less "generous" with the insecticide. It spoils the taste of the roaches. We prefer Organic Food (mol).
Then She praised Our Hunting Skills some more and asked Us to be on the lookout, in case any more Horrible Creepy Crawlies were lurking anywhere around the house.

Of course, we knew She would be pleased, which is why, even as We were gobbling up the Evidence Mortal Remains of the Enemy, We had decided to leave her an Offering - another hairy leg and a bit of the wing.

She found Our Gift later - when She was making the bed.

Happy Birthday to ME!

It is I, Queen Trixie, Empress of Jerusalem, Israel and the Entire Middle East, Guardian of the Boudoir, Alpha Kitty Extraordinaire!

Today is My Birthday! I am Four Years Old today! And just see what a beautiful Birthday Present Mummy bought for Me!

Here it is being checked out by my Security Detail (Caspurr and Shimshi), to make sure it is safe for Me and not Boobytrapped, before I set paw inside: 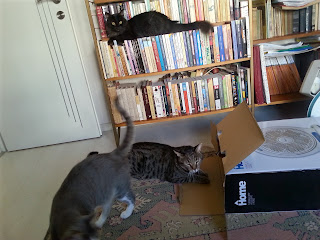 And here I am inside it, resting to keep up my strength, before My Birthday Ball, which will take place at midnight tonight (Israel time) in the Grand Marquee in the Enchanted Furr-est. You are all invited, of course. Co-ordinates have been sent to your Transportation Devices. 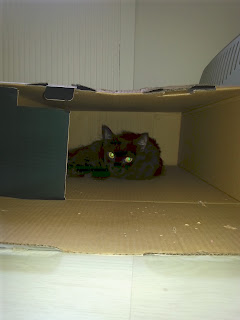 Wasn't it nice of Mummy to buy Me such a beautiful, big, Cardboard Box.
And, as you all know, kitties, I have always believed in the saying "Waste not, want not", so, instead of throwing away the electric fan that was cluttering up My New Box, I let Mummy have it - as a sign of My Appurreciation and Gratitude for having bought Me such a lovely prezzie.

Well, I am off now to enjoy some more Beauty Sleep.
See you all tonight at the Ball.