What a week it's been! On Tuesday morning, I had a feeling my Human was plotting something against Me, so as soon as I heard her getting up, I retreated to the very top of the highest kitchen cupboards. But it didn't help. She climbed up on a chair and gently lifted Me down. I suppose I could have bitten and scratched her, but I was Very Good and I allowed her to put me in my Carriage, with only a Minimal Protest.

She took Me to the v-e-t, where they used evil, unnatural methods to make Me fall asleep. And while I was unconscious, they cut open my tummy and did something to my ladycat parts, so that I won't get those strange, uncomfortable feelings I told you about before. Then they sewed Me up again and now, I have stitches in my tummy. When I woke up, I felt ever so weak and woozy. After a few hours, Mummy came and took Me home, and there, I was sick on the carpet.

Mummy was afraid Caspurr would pester Me and might cause my stitches to come out before the time is right (next Friday), so she decided to keep us apart for a few days. She set up separate - umm, facilities - for Me and made sure that whenever one of us was roaming about the apartment, the other would be shut in one of the rooms. And last night, I slept on Mummy's bed, curled up on her feet, just like I used to do before Caspurr came along.Today, she let us both out together - under her purr-sonal snoopervision - and we chased each other for a while and had a smackypaws fight.

I'm glad that I won't be having those awkward feelings any more, but I understand that I'll never be able to have kittens of my own now, which makes me a bit sad. On the other hand, if little kittens are all such pests as my little brofur, maybe that's a Good Thing (mol).

I still have to have something called "Antibiotics" twice a day, which Mummy gives me as drops. They don't taste very nice, but they are bearable and I'm Ever So Good about taking them. I have to set a Good Example to Caspurr, Mummy says. 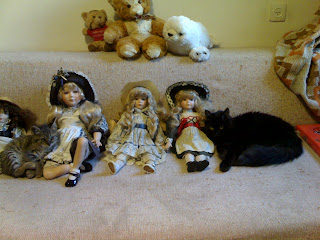 The thing that worries Me now is that until I regain my full strength, Caspurr might start getting Funny Ideas Above His Station. He needs to be reminded that there is just ONE Alpha Kitty in this house - and that Kitty is ...

It's really too much! Indeed, it is! I was very patient with the Intruder my Little Brofur, because Mummy asked Me to be nice to him, but things have gone too far. I can't even call My Home my own any more. He doesn't respect My Territory, and everytime I withdraw somewhere else, he follows Me. He seems to be Taking Over everywhere!

First it was his impudent use of MY food bowl.  Then it was MY Private Bathroom. Yes, kitties, Mummy arranged for us to have separate bathrooms, so as to be able to shut him on the balcony overnight, or when she went out of the house, and thus keep us apart when she wasn't there to snoopervise. But he keeps using the Ladycat facilities, instead of those intended for Gentleman Cats!!!

Things have been going from Bad to Worse. Yesterday, he monopolized Mummy by curling up and going to sleep in her lap. And She thought he was So-o-o-o Cute, She took dozens of pictures of him! 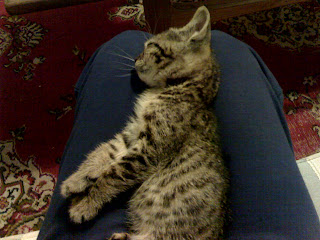 Today, he invaded My Favourite Snoozing Spot, under Mummy's bed. See for yourselves, if you don't believe Me!


And a few minutes ago, came the Final Straw, kitties! Of all my toys, My Very Favouritest (in fact, the Only one that I like to play with) is my Blue Rabbit. But he didn't leave me even that!
Just look at him! 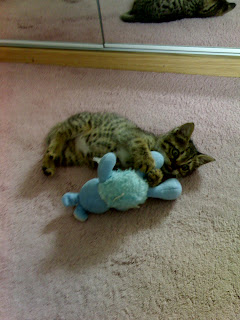 Mummy intervened at that point and took it from him and gave it back to Me, but it smelled of Little Brofur and I didn't want it anymore.

Now I have NOTHING left that I can call My Own, kitties! It won't be long before Mummy stops shutting him on the balcony overnight and then he'll be stealing my place on Mummy's bed - my Last Refuge. I can't even take myself off to my Second Favourite Place - the Computer Room - because Mummy shuts the door there whenever she's not using it, to prevent Me from climbing the bookshelves. 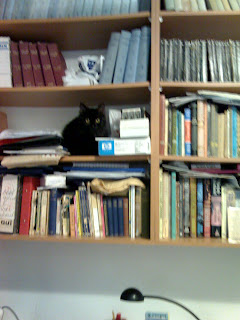 What is left for Me, Kitties??? What am I to do? I thought it would be fun to have another kitty to play with, but this is TOO MUCH!!!!!

Getting To Know You

My Human has been very busy today writing her own blog  but she still found the time to keep a close eye on my efforts to get rid of better acquainted with my new little brofur. 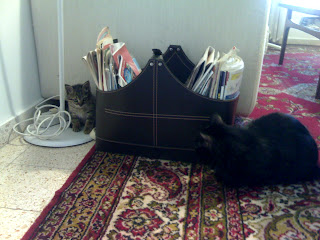 I was careful not to take unfurr advantage of my greatly superior size and strength. He is only a baby, after all. I was sure I would easily get the better of him and that, even if I couldn't get rid of him, I would at least show him who is The Boss around here. So I whopped him a couple of times with my mighty paw (claws retracted, of course. I didn't want to give him a purrmanent injury, it would have made Mummy very upset). But, kitties - he tried to whop me back! 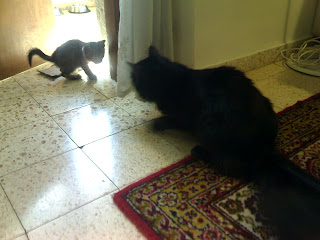 I did my very best to put the fear of Cod into him, but he just wouldn't take it seriously. When I turned my back on him, he tried to grab my Beautiful, Splendiferous Tail. Nor did he realise what Peril he was in when I crept up on him from behind, as befitting the Mighty Huntress that I am. 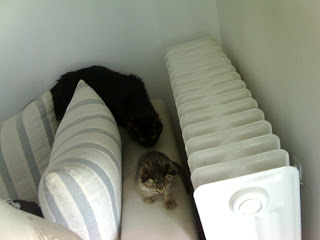 He even had the chutzpa to eat out of My feeding bowl. 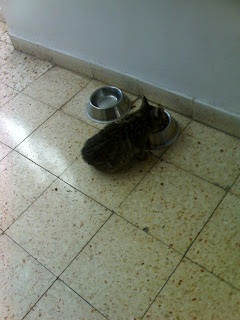 I believe he thinks it's all some kind of a Game! How can I convince him that I am in Deadly Earnest?

I want you all to meet my new little brofur! His name is Caspurr. Not Caspar, but Caspurr. He was delivered this afternoon by his foster-Mummy, Jane. 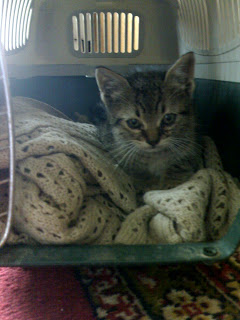 The v-e-t thought he was about a month and a half old but Mummy thinks he may be younger. He's very tiny. Mummy fed him some cottage cheese and then he went and hid under the armchair. And I went and hid under the bed because I was cross that he was getting all the attention. But afterwards, he came out and went and hid somewhere else and we couldn't find him anywhere and Mummy got into such a panic. She was afraid he had got out onto the window-ledge when her back was turned and fallen down into the garden so she went down to look for him. But, of course, he hadn't done anything of the kind. Mummy found him at last hiding in the kitchen, in the very same corner under the table where I hid on my first day here. Mummy can't understand how it was that she didn't find him, because that was practically the first  place she looked.

We haven't really got to know each other yet. He seems to be very shy. Mummy said it will be up to Me to teach him proper kitty ways, because I am a Young Ladycat now, and he is still just a baby. But, kitties - he is so very cute! Supposing Mummy starts to love him more than Me? She says I am still the furriest of them all - but,just supposing...

Now I am going to baffle Mummy by chasing my own tail and hissing at it very loudly. She doesn't know why I am doing that. To tell the truth - neither do I (mol). Perhaps one of you has some idea.

P.S. I just gave Mummy the fright of her life by hissing at her really loudly. That will teach her to bring another cat into MY home without my purr-mission.

I can't believe it! My Uncle didn't fall in love with Me at furr-st sight! I was Ever So Good, I didn't scratch him or grab his feet like I do with Mummy's other friends who come to visit. I came and sat down beside him on the sofa and purred and waited for him to stroke Me - and he DIDN'T! I feel so terribly Let Down, kitties! Mummy was Quite Right (she is, sometimes - MOL). He isn't a Cat Purr-son!!! How can this be???

And as if that wasn't bad enough, kitties - I have discovered that gefillte fish is not all it's cracked up to be, either! My Human gave me some - and I sniffed it, licked it and decided I could well do without it;-)   Humans eat some really funny things, it seems to Me...

All in all, it's been a Very Disappointing Week:-( 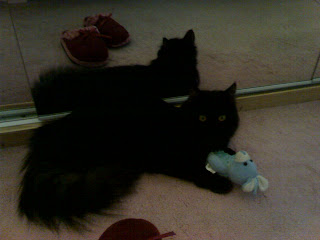