It is I, Caspurr the Tigger Tabby!

It has become horribly cold. As Trixie told you the week befurr last, the Good Weather couldn't last - and it didn't! Now, there are lots of grey clouds and it's dark and miserable. And there's lots and lots of skywater.

But Mummy says it will be good for her new Sick Lemons! Yes, Kitties! She bought lots more of them, all in different colours.  And We are protecting them from the Birdies who would sit on them and squash them, if We were not there to scare them away.

Look, see! Here I am, protecting the Sick Lemons! 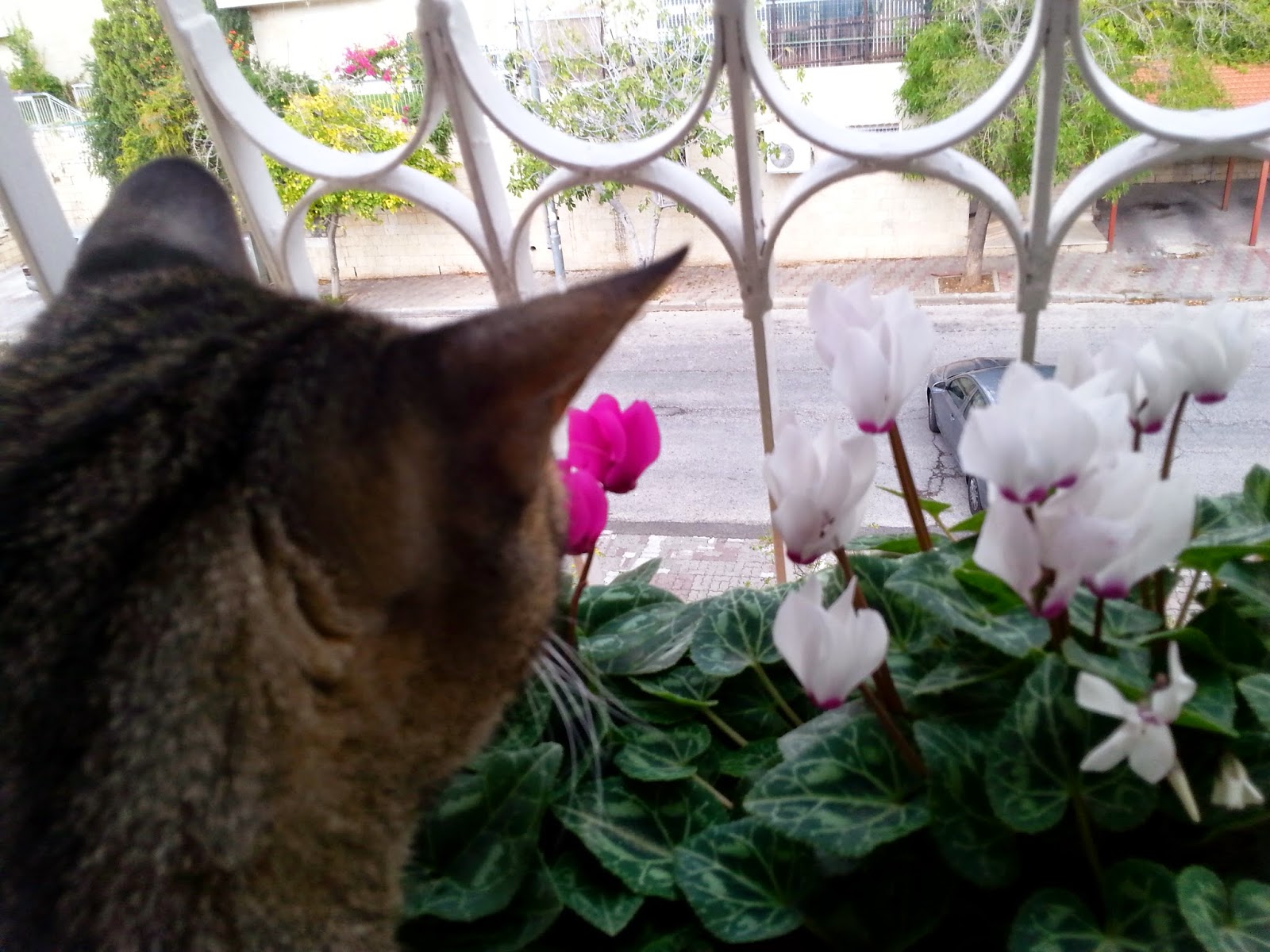 Besides the Sick Lemons, Mummy bought loads and loads of other plants for her window-boxes and for her own entrance porch - but she still hasn't fixed up a catio or a Whiffles-Balcony for Us, although at least She leaves the windows open and We can sit and enjoy the window-boxes and the fresh air whenever We want.

At present, however, We don't want, because of the cold and the skywater. We don't like No-vember. However, at least Mummy has decorated Our Room with some furry nice art work. She has hung copies of some famous pictures on the walls.
Would you like to see? 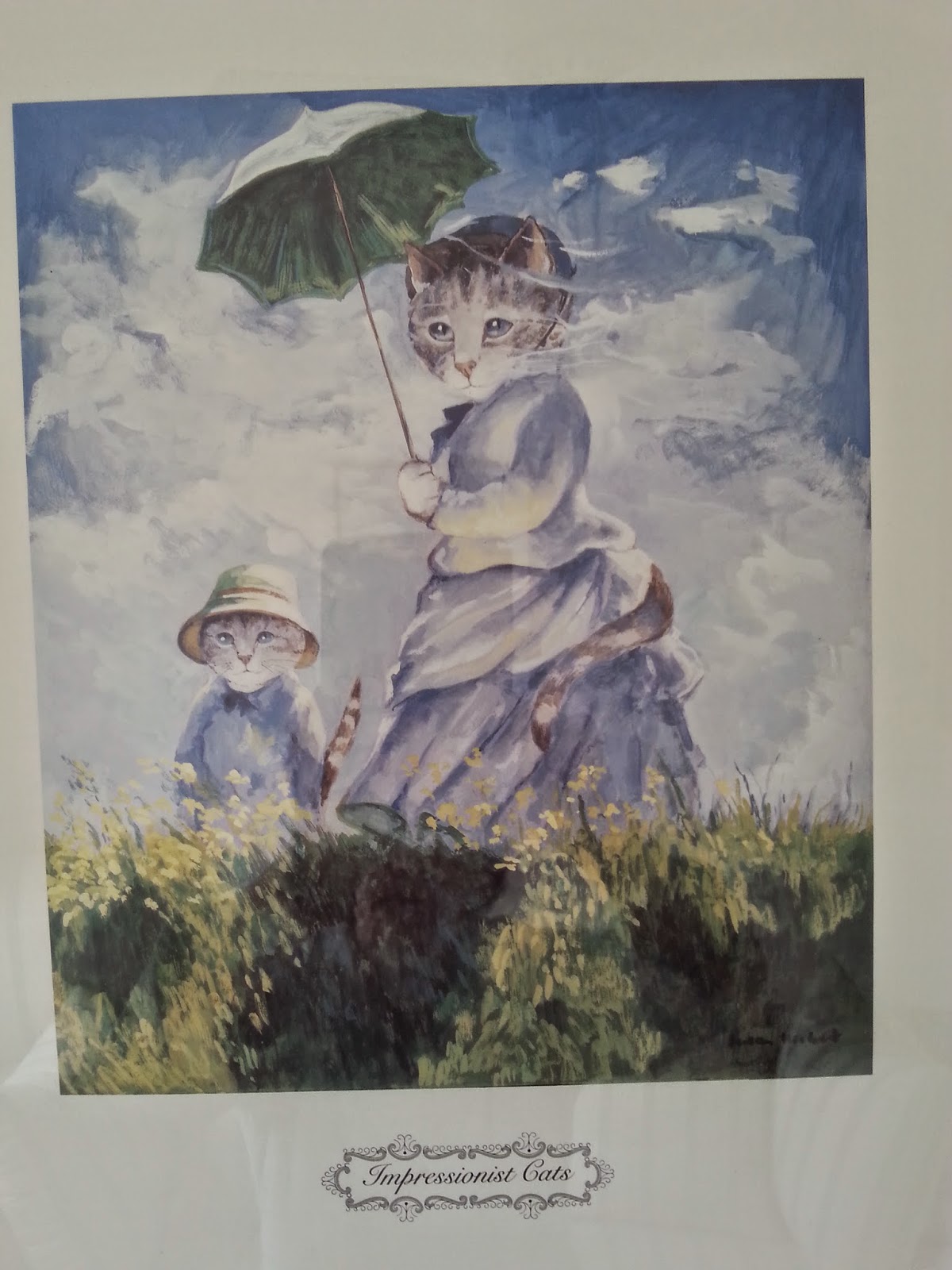 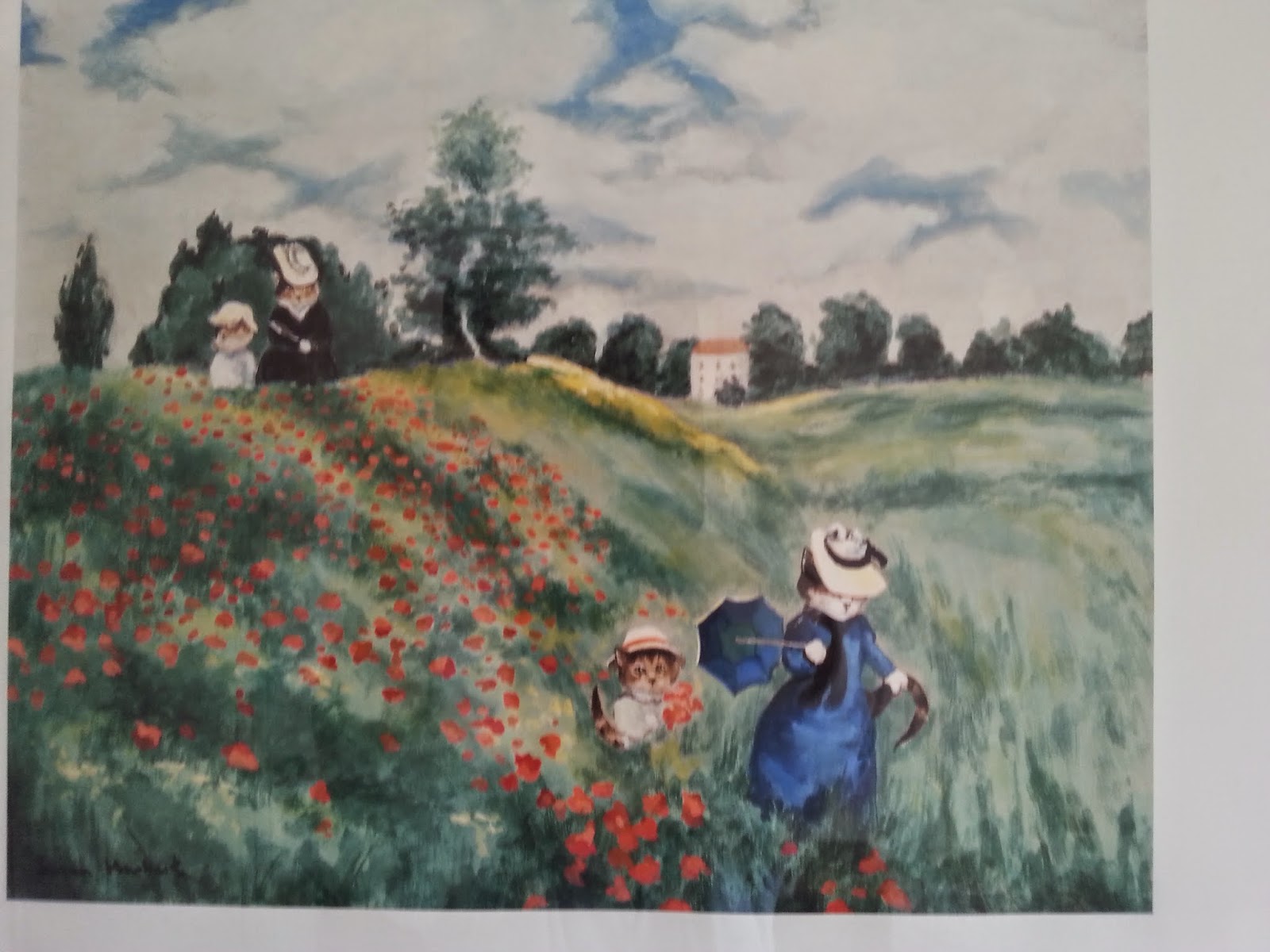 Trixie has studied Art and she says this style of painting is known as "Impurrsionism".

Shimshi says that if you biggify the top picture, you can see that the smaller of the two kitties looks a bit like him. I don't see it, do you? However, Shimshi is convinced that one of his furr-fathers was the model for this painting.

Speaking of the cheeky birdies who would damage or even EAT Mummy's window-box plants, the other day, a Pigeon mistook the bathroom window for a dovecot and flew inside. It's still not certain who was more alarmed, Mummy or the Pigeon! Anyway, it managed to find its way out again quickly enough, but now, Mummy's afraid to open the bathroom window more than a few centimetres.

We made Mummy effur so happy these past few weeks by playing together nicely (most of the time). We even curled up all three of Us on the bed and let her take our picture together. 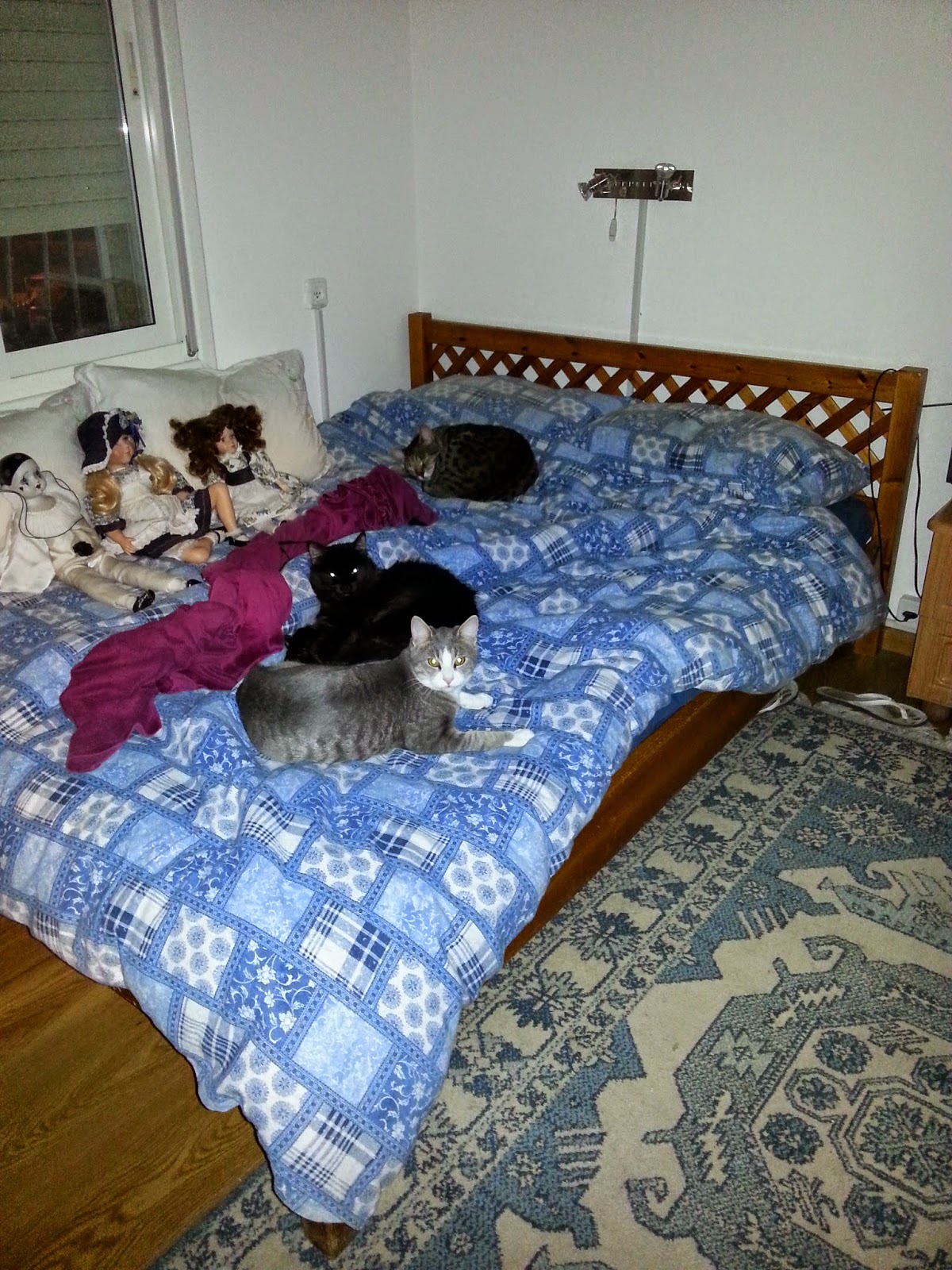 She was so pleased with this picture that She decided to make it Our New Profile Picture.

We must go now, dear anipals and pester remind Mummy it's time for Lunch. Before We do so, We would like to wish those of you who celebrate it, a furry enjoyable and happy Thanksgiving!

Caspurr the Tigger Tabby, Trixie the Black Panfur and The Mighty Shimshon (Shimshi for short)

It is Me again, Trixie the Black Panfur!
Today is a furry special day for Me, because two years ago today, on November 12th, 2012, Mummy and I found each other.

I entered Mummy's Life at a furry sad time, when She was mourning the departure of the beautiful Possum to the Rainbow Bridge (see last blog) and She wasn't sure She was quite ready to let a new kitty into Her Life, but She told the v-e-t She would take a look at Me and see how We get on, so my Foster Mummy brought me round and the rest, as they say, is History - or rather,  it is My Story (mol).

Look how tiny I was when I furrst arrived: 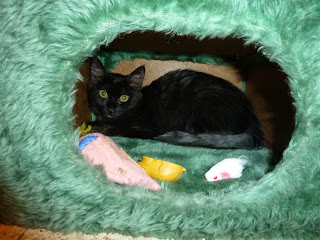 Still, I was bigger than either Caspurr or Shimshi when they furrst invaded intruded entered Mummy's and My lives. I was already three months old.

Now Caspurr is much fatter bigger than Me and Shimshi is almost as big as Me.

Speaking of Shimshi, I have decided to take a more active paw in his Education, because if I leave it all to Caspurr, there is no telling how the Baby Mancat will turn out. For starters, I have been giving him some tips on how to catnap elegantly, as befits a creature who is, unquestionably, the Highest Pinnacle of Creation - namely, a Feline. 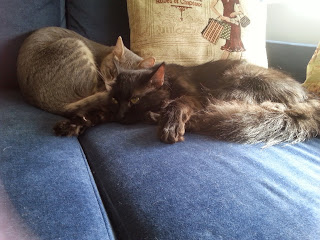 A propos Catnapping, Shimshi and Caspurr have enrolled in an elective course I am giving at the Feline University of Jerusalem, where I have recently been made a Purrfessor: Synchronised Sleeping Techniques (SST). This is a relatively new field of study about which I shall be writing at greater length in a future post (possibly as early as next week).

I have no time to write more at present, as I must go and have another catnap so as to be completely rested for my Gotcha Day Pawty at 8pm this evening, Israel Time. I hope to see all of you there, despite the short notice. If the pleasure of seeing Me is not a sufficient attraction, I can tell you that here in Israel, we are experiencing unseasonably warm weather, temperatures in the low to mid-20s Celsius and lots of sunshine. Even the nights aren't all that cold - certainly not in comparison with what I've been reading about where a lot of you are living. They say that will all change at the weekend, so you'd all better teleport over to my pawty tonight and enjoy it while you can (mol). Mummy will be safely Out Of The Way, as She has a rehearsal with her Caterwauling Club this evening, so we can get up to lots of Evil Mischief, like we did last time She went out caterwauling: 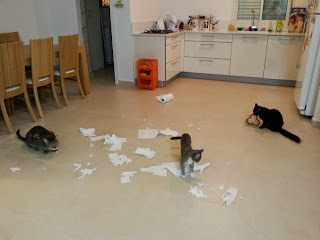 Till tonight then, Dear Anipals!