Just Around the Corner

Queen Trixie here again, just for a short update.
This week has been mostly bright and sunny, with lots and lots of sun-puddles, sufficient for each of Us to have their Own Spot. Mummy says Spring may be just around the corner. We don't know which corner She means, though. There are lots of corners in Our Home and We have looked around all of them - but We didn't find anything.

Mummy was very happy to see that her Sick Lemons on the front porch are blooming. Mummy loves Sick Lemons. They are purr-actically her favourite flowers.
She certainly saw plenty of them on her field trip the week before last. Speaking of which, She wrote all about that trip on her own bloggie and you can read all about it here.

Kitties, We have been purr-fecting our Methods of Outwitting Mummy, but you will have to wait till after Shabbat before We tell you all about Our Cleverness. You wouldn't believe how ingenious We have been (mol). And Mummy will never guess how we did it.

What is "It", you are asking yourselves.

Shabbat Shalom to you all. Have a lovely weekend. 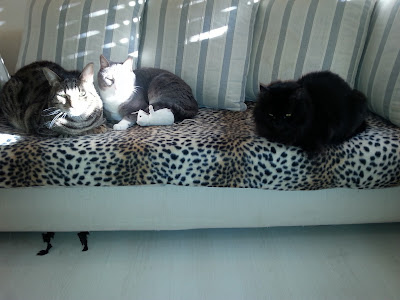 It is I, Caspurr, King of the Tigger Tabbies. I want to tell you how We have managed to Get the Better of Mummy.

As you know, whenever She wants to cook or eat, or when the Cleaning Lady is here, She shuts Us up in the Bedroom.  Most of the time, when that happens, We just Snooze, either in the Wardrobe or in whatever sunpuddles may be available (and they have been pretty scarce lately). In fact, sometimes they are so small, We have actually shared the same sunpuddle, all three of Us, although Trixie usually prefurrs to do without Sunshine, rather than curl up with Us Boys. 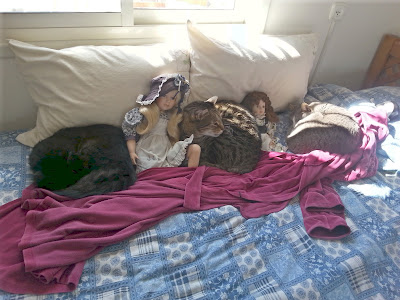 On Furr-iday, however, We decided that We were tired of being impurrisoned whenever She wants Us out of the Way, so We put our heads together and came up with a plan to break out.

We had come to the understanding that the key to opening the Bedroom Door (no pun intended - MOL) was by purr-essing on the door-handle. Being the biggest and the strongest, that task fell to Me (with a little help from Shimshi). So he and I took it in turns to jump up and purr-ess it and when the door finally opened a crack, Trixie made a dash for Freedom, followed by Shimshi and Yours Truly.

Mummy, who was busy pre-purring the Shabbat meal, was so surprised. At furrst, she couldn't understand how We had got out. She thought maybe She hadn't closed the Bedroom Door propurrly. She chased after Us and returned Us, one by one, to the Bedroom. It was only when She had shut Us inside again, and heard Us jumping over and over again at the door, that She realised what had happened.

To Our Delight - and Mummy's Dismay - it appears that the Bedroom Door can only be locked from the Inside.
But We took pity on Mummy and remained inside till She had finished cooking - and, as a reward, She gave Us our Lunch a little earlier than usual.

What do YOU do when your Humans shut you away in one of the rooms?

The Evil Among Us

We are so ANGRY!
No! ANGER doesn't begin to describe the RAGE We feel in our hearts. But We are also Heartbroken at what We have just read on Fursbook!
(Warning! This article contains graphic, heartbreaking images!)

A Rottweiler woofie was found in Detroit with his nose and ears cut off and with many other injuries. It is clear that some Human, or Humans, (if they can even be described as such) did this deliberately to the poor woofie. A $35,000 reward has been offered for anyone offering information leading to the arrest and conviction of those responsible.

How could anyone do such a thing to a defenceless animal? If only We could get our claws into them, We would scratch their eyes out!
Evil, E-v-i-l-, EVIL devils!!!
Posted by The J-Cats at 2:24 PM 10 comments: