You were probably wondering why We didn't write a bloggie on Wednesday (December 23rd) to commemorate the fourth anniversary of Princess Pixie's departure for the Rainbow Bridge.

It's not that We had forgotten Pixie - We could neffur do that - only Mummy was away on a field trip all day and the Computer Thingy was switched off. In any case, only Mummy knows the passwords. And when Mummy got home, there were problems with the internet connection. Mummy just about managed to help Us get out a short Chrissymouse message to our furriends, on her Mobile Phone, but all the pictures of Sweet Angel Pixie were on the Computer and Mummy thought it would be furry difficult to write a suitable bloggie with pictures on the tiny phone.

We are still having purr-oblems but We had c-o-n-n-e-c-t-i-v-i-t-y (MOUSES! What a long word!) for long enough this morning to go to this really cool website recommended by our furr-iend Dezi from Deziz World and make a mosaic of all the most beautiful pictures of Pixie We could find.
It took Us ages and ages, because We had to sort through loads and loads of pictures and decide which to use - plus the fact that, although We had the internet connection back again at long last, it was furry, furry slow. And then, when We were finally ready, We lost the connection again and all Our Hard Work was lost  :-(
It's lucky we had already saved a non-animated version to our computer!

Anyway, here is the result - a lovely mosaic of the beauteous Princess PixiCato (aka Pixie): 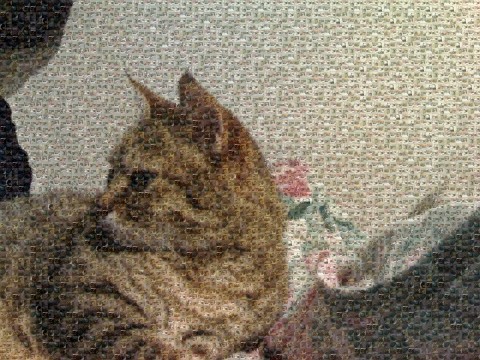 Even if it didn't turn out quite the way Mummy intended, We still think Pixie looks beautiful - as always.
Caspurr looks a bit like her - he has her colouring. But Mummy says that I, Queen Trixie, am much more like her in character. We aren't sure if, and in what way, Shimshi resembles her. Perhaps in his love of mischiefs (mol). As a little kitten, Pixie was furry good at planning and carrying out all kinds of mischiefs. It was in her later years that She became more staid and ladycat-like.

We do know that it was Pixie who chose Me for Mummy; Pixie, who whispered in Her ear and in Mine, that I was the One For Her, and She for Me, when She was heartbroken and Kitty-less after both Pixie and Possum had flown away to the Bridge.

Now Mummy has leaky eyes again, so We are going to snuggle up to Her and try to make her happy again, as We remind Her that Pixie hasn't really gone, She is always here, watching over Mummy and Us, as are Possum and Minxie who came before Possum, and that We shall all be together again one day, in the Presence of the Great Cat in the Sky, in the Land of Eternal Sunshine Beyond the Rainbow Bridge. 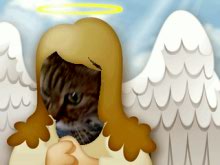 It's That Time of Year Again...

Yes, Kitties! It's that time of year when Mummy remembers, at the furry last minute, that even though We have finished celebrating Hanukkah, we have a Whole Lot of Friends out there, Anipals and Humans, who are just about to celebrate Chrissymouse.
So, even though the Computer Thingy is not working (at least, it's working but the Internet doesn't seem to be propurrly connected) and Mummy is having to type this for Us on her Mobile Phone, we wanted to wish you all a Furry Merry Chrissymouse! Be well and if there's any turkey (or anything else, for that matter) left over from your Chrissymouse Dinner, remember that there are all too many homeless kitties who would be effur so happy to have a good meal and a loving caress. So remember to share and spread the Chrissymouse Spirit.

A Merry Chrissymouse to you all. 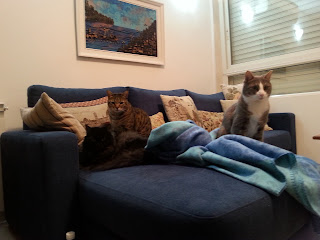 Time for a Grumble

It is I, Queen Trixie, Empress of Jerusalem, Israel and the Entire Middle East, Guardian of the Boudoir, Alpha Kitty Extraordinaire! 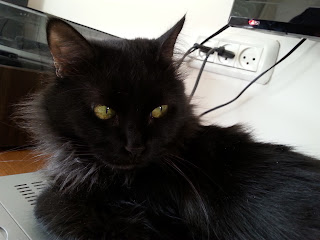 I have to tell you, my brofurs have been furry mean to me the past few days. As if things weren't bad enough with Caspurr sneaking up on Me and pouncing on Me all the time, now he has purr-suaded Shimshi to join in, and help him to ambush Me. They gang up on Me and corner Me, and it's Not Fair, it's Two to One! I knew this would happen when Mummy brought a second Mancat to live with Us. I just knew it.

Some of the time, I get on quite well with Shimshi, but Caspurr is a Furry Bad Influence on him. For example, he used to eat nicely, the way I taught him, but now he just gobbles his food the way Caspurr does, and even tries to steal Caspurr's food bowl (which is poetic justice, in a way). And, of course, they both do their best to steal my food, and would do so, if Mummy didn't put my bowl in a separate room at meal times and shut the door.

The thing is, Kitties, that all this puts Me in quite a Dilemma. Mummy is always ready to protect Me, of course, but if I run to her effurrytime the Boys bully Me, I will lose all credibility as an Alpha Kitty. On the Other Hand, they enjoy an Unfurr Advantage, as there are two of them.
What do you think I should do?