The time has come! Tomorrow is the Big Day! We are effur so excited!

Yes, the long-awaited event has arrived! Tomorrow, We are moving to Our New Home.

Effurything is at sixes and sevens. Packing cases effurywhere (and made of lovely, scratchable cardboard - heh, heh, heh)!

We wanted to help Mummy by snoopervising the packers, but She shut Caspurr and Shimshi on the balcony and Me, Queen Trixie the Alpha-Panfur, in the bedroom, to make sure (so She said) that no-one accidentally trod on Us.

We haven't time to write much now, because Mummy is going to turn off the Computer Machine and go to sleep. Tomorrow is going to be a furry, furry long day, she says.

She also says it might be a few days before We can tell you about the New Flat, because she'll have to wait for the (In)humans from the Cable Company to connect her up to the Internet.

So we will just wish you a Good Week and leave you with a few pictures of Us, mewsing on the Fun of Packing Up One's Old Home... 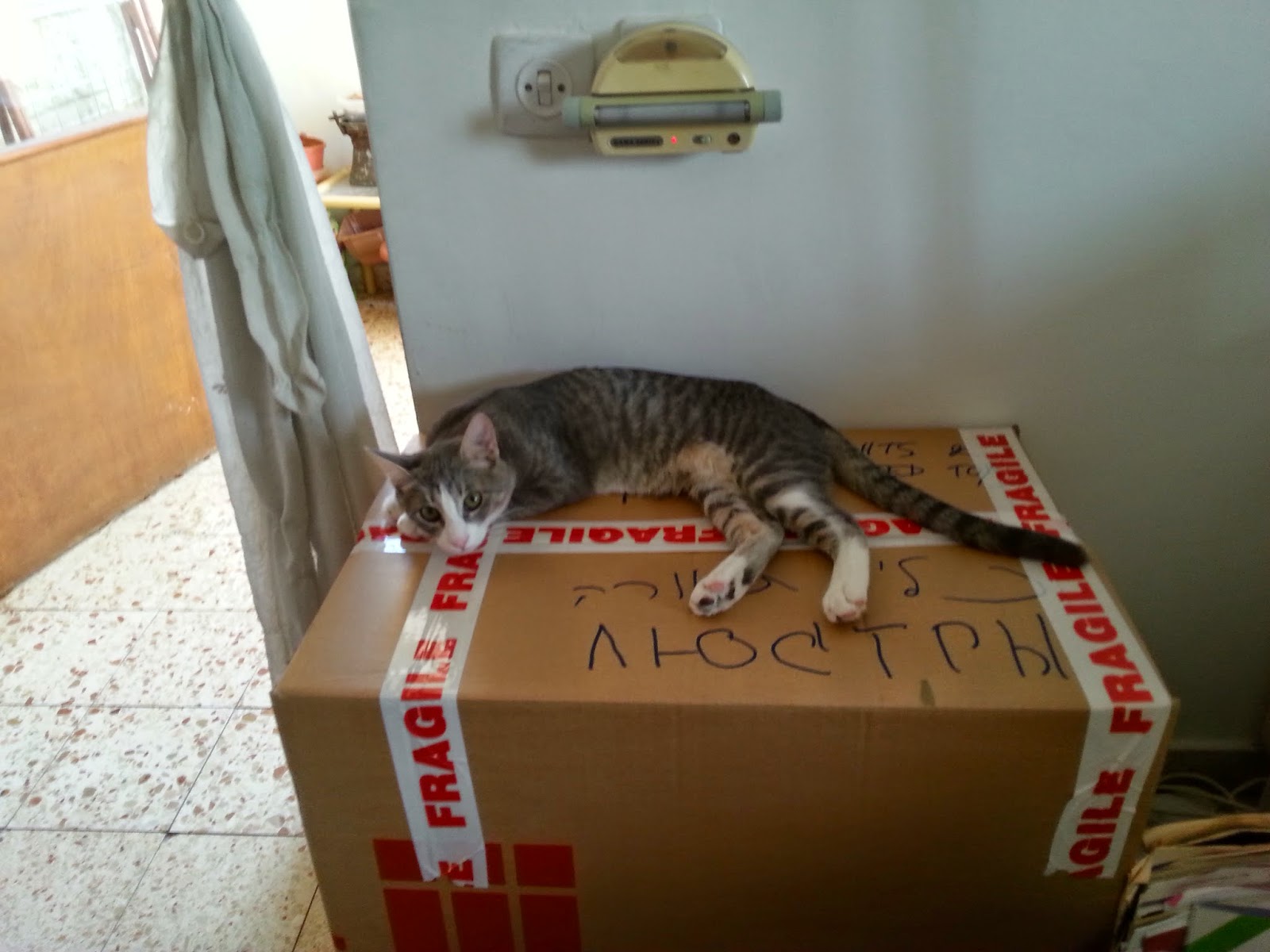 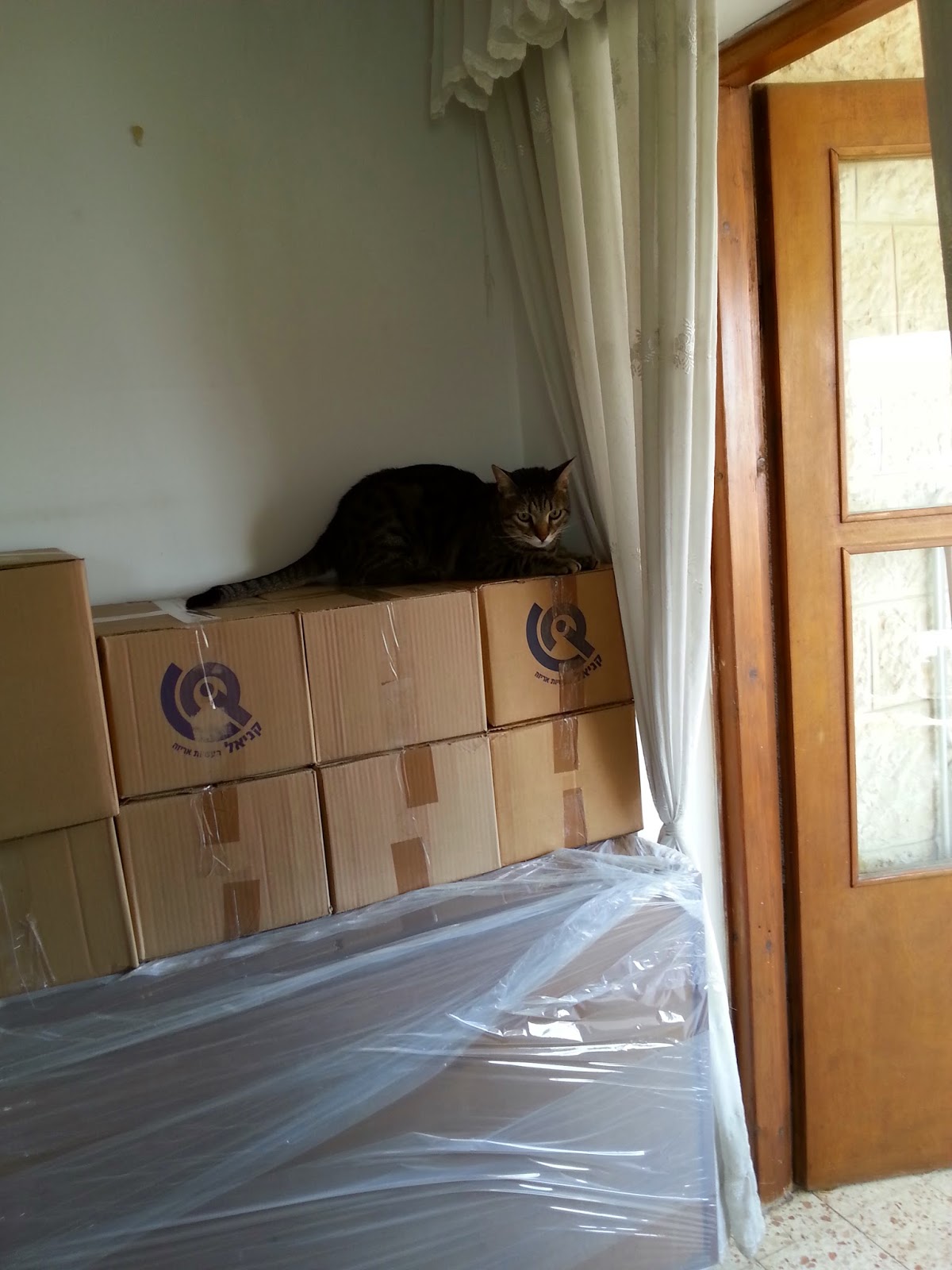 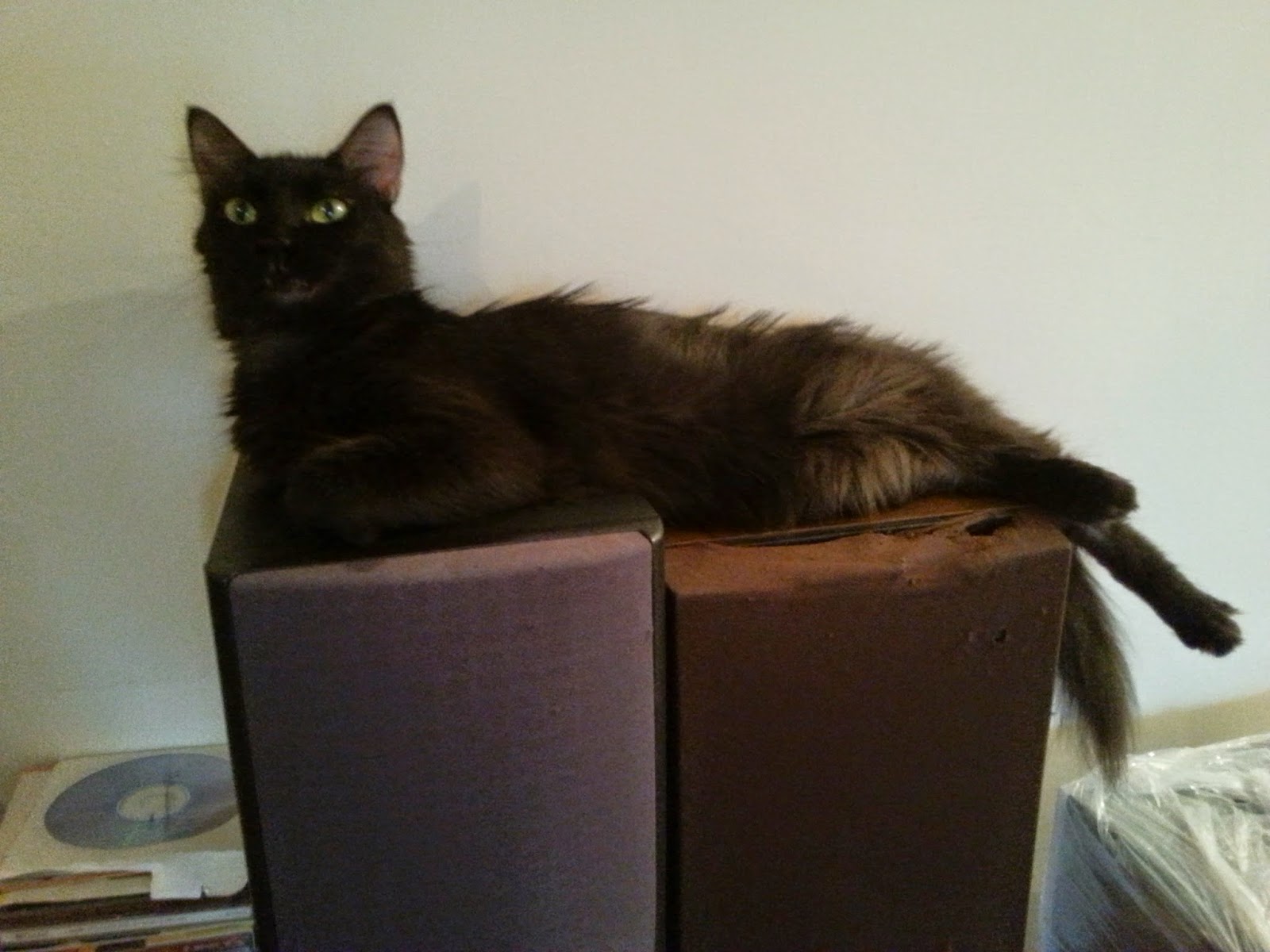 This is Me again, Queen Trixie, Alpha-Kitty Extraordinaire. 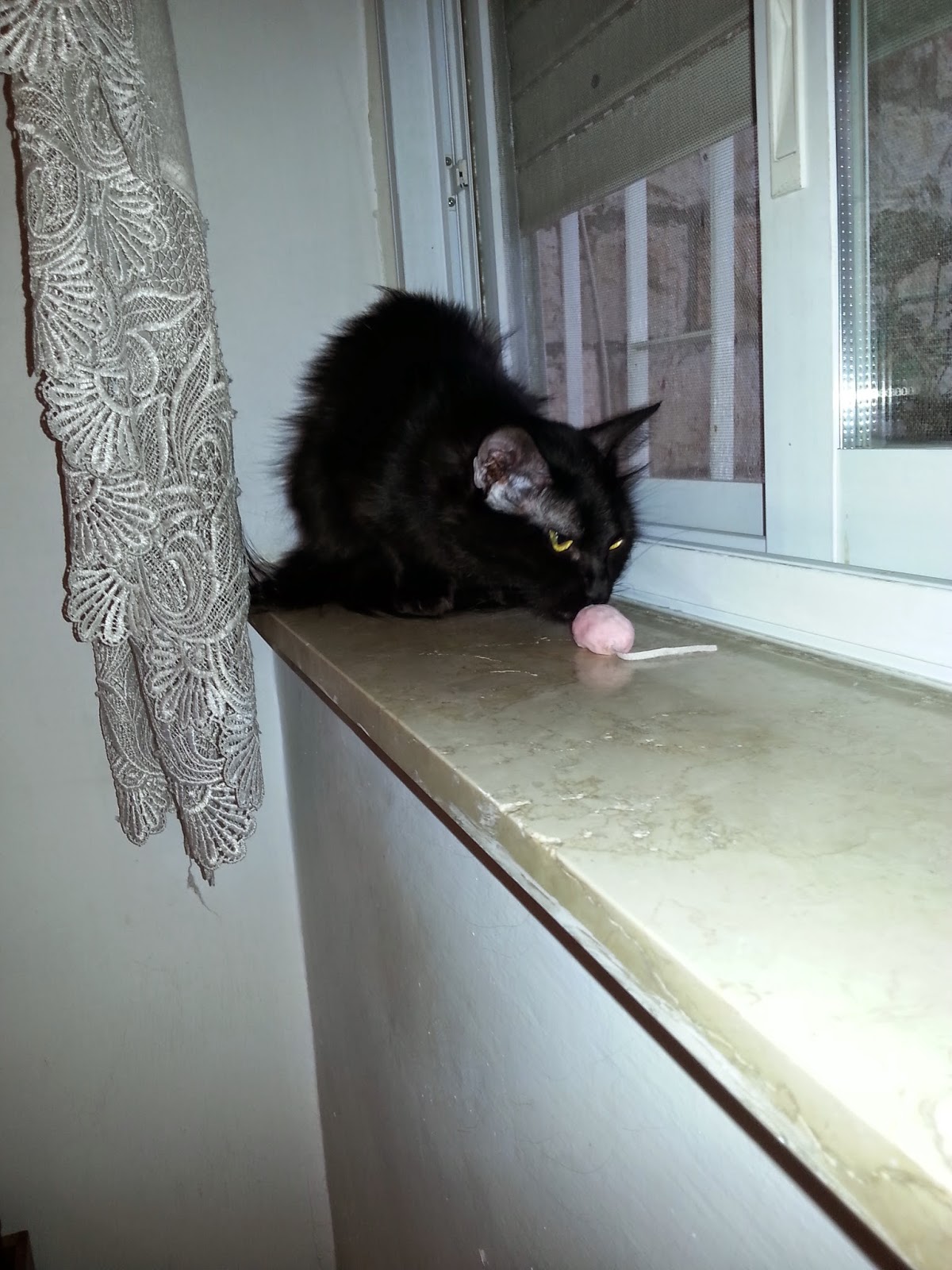 Today is my Birthday! I am two years old today!

Mummy gave Me a new pink mousie. You can see the mousie in this picture. Caspurr immediately jumped up onto the window-sill and tried to steal my mousie, but Mummy shooed him away.

I spent most of the day in my new hidey-hole, under the armchair in the living room. I have clawed away at the cloth covering underneath, so now, I can climb inside and nobody can find me. Well, at least, they can find Me - but Caspurr is too fat to get under the armchair, because he eats far too much and with Shimshi, all it takes is a fierce hiss or two to get rid of him.

Mummy gave me Fancy Feast for breakfast and again for supper - turkey slices in gravy. I love the gravy.

Mummy has been doing her best to make sure I have Quality Time with her, and a place which is all Mine, where Caspurr and Shimshi can't bother Me. I am the only one allowed to sit with her in the study when She's working at her Computer Machine. I like to sit on the back of her chair, or on the printer. 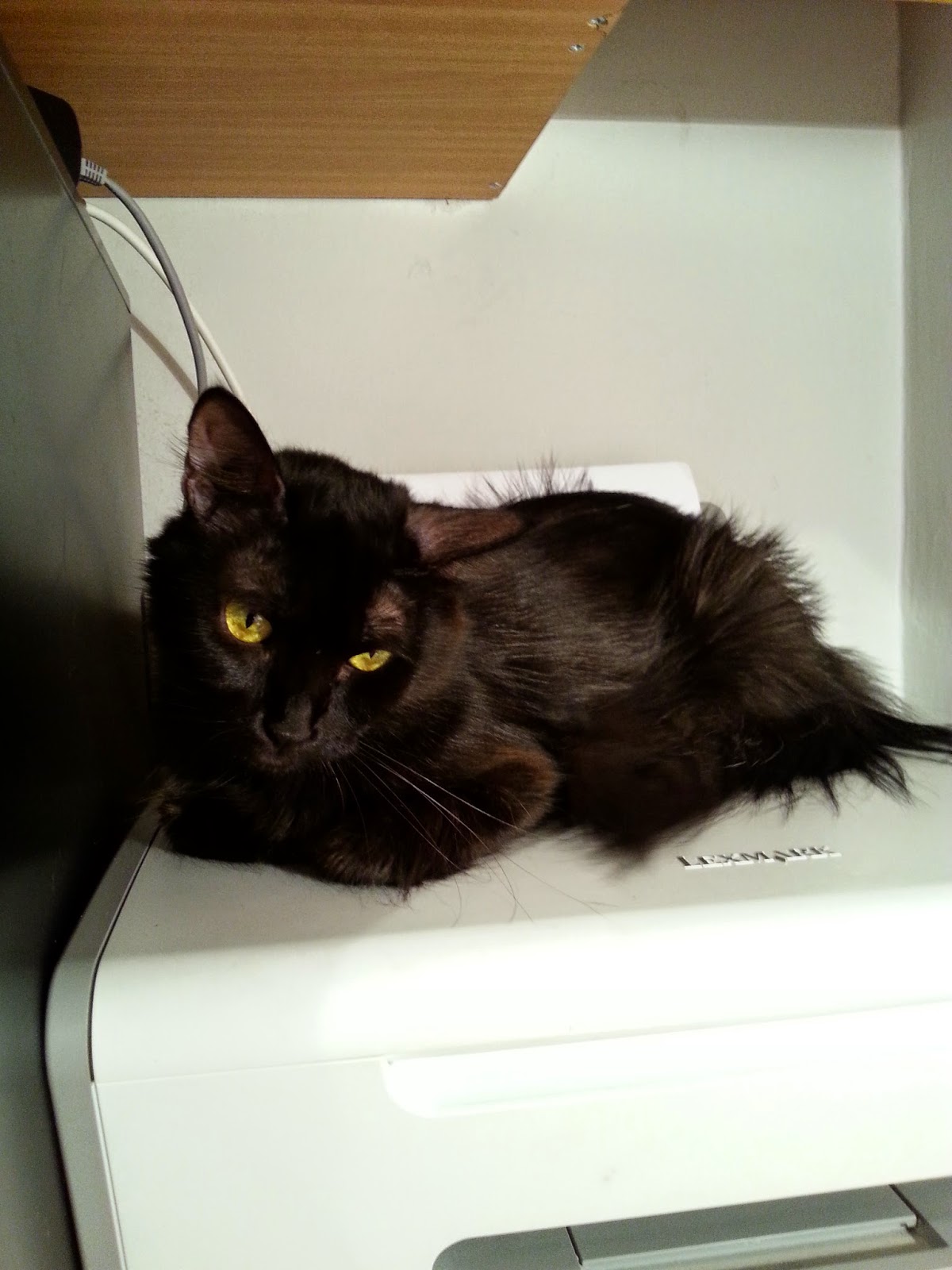 Kitties - and other Anipals - instead of having My Birthday Pawty today, in the middle of the week, we have decided to postpone it till Shabbat, at 5.30 pm. It's going to be a Birthday Picnic in the Enchanted Wood. Your Teleporter Tunnels, and other Transportation Devices have been programmed with the coordinates, so we shall be looking forward to seeing you.

In Other News - Shimshi was kit-napped and taken to the V-E-T today to have his shots. He went quite quietly but he told Us later that he hadn't enjoyed the taxi ride at all. In fact, he was quite subdued for several hours after he got home. I felt almost sorry for him, but at least it meant that he wasn't pestering Me all the time to play with him.

OK, Effurrybody! It's time for Mummy to go to bed. It's only half past ten, but She has to get up early tomorrow to meet the contractor who is doing the renovations in Our New Home, to which We hope to move at the end of the month. So Good Night, Dear Anipals.

Looking forward to seeing you all at my pawty.

Trixie the Black Panfur
Posted by The J-Cats at 10:34 PM 7 comments:

Shimshi To The Rescue - Twice!

It's Me here, Trixie the Black Panfur, Alpha-Cat Extraordinaire.

Mummy brought her little nieces round for a short visit, to meet my little brofur, Shimshi. It didn't bother Me, as I was ensconced on top of the highest kitchen cupboard. Caspurr ran under the bed as soon as the three intruders walked through the door. He doesn't like having to confront so many strangers at once.

Well, Mummy's nieces (our Human cousins) just loved Shimshi, and of course, Shimshi loved all the attention, but one of the twins lay on the bed and tried to purr-suade Caspurr to come out. Something must have spooked him because he just shot out from his hiding place, raced into the kitchen and disappeared.

After the intruders visitors had gone, Mummy started looking for Caspurr, but he was nowhere to be found. Mummy went all around the appurtment, calling for him, but to no avail. She even asked Me and Shimshi if we could help find him, but We didn't know where he was either. Eventually, she decided he would come out when he was ready and decided to go and have a shower. But Shimshi wasn't ready to give up and went on looking for his Big Brofur.

Just as Mummy was preparing to have her shower, Shimshi came running to her and then ran away and back again , and away again and it was clear to Mummy that he wanted Her to follow him. So she did and She couldn't understand why he was sniffing at something under the fridge. So she knelt down on the floor and looked under the fridge - and there was Caspurr, crying in distress! Mummy hadn't thought to look there before, because She was sure Caspurr was much too fat, portly, big to get under the fridge. He must have got in from the back, where there is a wider opening and now he was in a panic and didn't know how to get out again.

Mummy didn't know how to get him out either. Then She had an idea. She asked Shimshi to show Caspurr how to get out of that tight spot. She moved the fridge out, and Shimshi went round the back and crawled in next to Caspurr. But Caspurr still didn't come out, so Shimshi went right in there next to him, to encourage him. And then he must have talked to Caspurr, and shown him the way out, because at long last, Caspurr turned round and came out the same way he had got in, and hid out again under the bed.

Then, Shimshi decided that Under The Fridge was a fun place to hide out so he went back in, till Mummy tempted him out with some noms. And once Shimshi was out, She began to push the fridge back into place - till She heard squealing and She looked and saw Shimshi squished between the fridge and the wall, miaowing furry loudly. She quickly moved the fridge to release him - he wasn't  really squished - and he ran off to find Caspurr and make sure his Big Brofur was okay.

Shimshi is a real Pest sometimes, but I've got to hand it to him this time. He rescued Caspurr, not once but twice today. Once, when he found him - when nobody else could do so. And then again, when he showed him the way out of a furry, furry tight spot.