The Evil Demon Kitties Strike Back!

Well, as you all know by now, We have learned that by working as a Team, it is much easier to outwit Mummy than if We each look out only for Ourselves. And so, as We explained in our last post, We managed to circumvent Mummy's anti-kitty lock and get into the trash-can which She keeps in the cupboard under the kitchen sink.

But Mummy, who can be as determined as a Hungry Kitty when She puts Her mind to it, stuck sellotape on the drawers of the kitchen unit and then, when She saw how easily We managed to tear that away, replaced it with electrical insulating tape, to make it harder to open the drawers and, with them, the door of the cupboard.

As you can imagine, We weren't going to let Her get away with that. So, one night last week, Shimshi went to work on the sticky tape with his sharp little claws, and Caspurr, who is furry strong, tugged and tugged at the cupboard door and hey, presto! We were back in business.

But, for some reason, Mummy - who was not supposed to be prowling around like a Cat at 2:30 in the morning - woke up and hearing strange noises in the kitchen, She came to investigate and caught Us in the Act! She took away one chicken bone (which We had licked clean) and threw it in the trash can and shut all the drawers which were open and was just about to go back to bed when She heard pathetic little mewing sounds from the Food Drawer. So She removed all the sticky tape She had put back on the drawer and opened it - and who jumped out?

Yes! That silly Baby Mancat had got himself shut in!

Mummy screamed at all of Us and said She ought to rename Us. Not the J-Cats, but the Evil Demon Cats!
Kitties, that was a furry hurtful thing to say, wasn't it? I mean, look at Us! How can anyone think We are Demon Kitties? See how angelic We are! 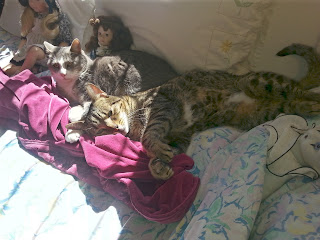 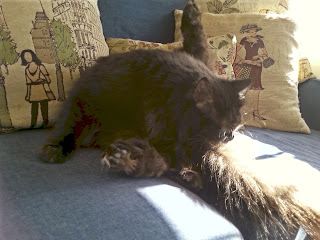 Anyway, Mummy shut all the drawers and cupboards again and replaced the sticky tape and closed the (useless) lock and even put a row of chairs all along the front of the kitchen unit. Then She went back to bed and found that We had generously left the remains of the SECOND chicken bone as a purr-esent for her, on the bed. So She had to get up again to throw away the bone. This time, She was too tired even to scream at Us - but when She got to the kitchen, She saw that Caspurr was again trying to open the cupboard door. That's when She lost it completely and shut Caspurr up in the guestroom for the remainder of the night. She has never done that before - but this time, remembering Our New, Enhanced Capabilities, She even wedged a chair under the door handle so he couldn't open it! Then She went back to bed and locked the bedroom door, and I heard her crying.

The next morning, She let Caspurr out and fed Us all. Caspurr gobbled all his noms down and then came and fought with Shimshi for what was left of Mine.

And then he was sick all over the kitchen counter.

I guess Mummy was too exhausted to be angry by then, or maybe She was sorry for the hurtful things She had said to Us, because She just cleaned up without a word, except to say to Caspurr that that is what happens when you gobble your food.

And that's the State-of-Affairs for now. Sticky tape and chairs in front of the kitchen unit, which Mummy has to remove effurry time She needs to make so much as a cup of coffee and a sandwich. Obviously, things can't continue this way.
I know Mummy is planning something - some new tactic in this war She cannot possibly win.

Sorry we're a bit late. It took longer than expected to put up the marquee, but here We are now, at the Enchanted Forest, overlooking the Old City of Jerusalem, making the best of the lovely, spring-like weather. 18 degrees Celsius, officially - but it feels warmer.  If it starts to get chilly, after dark, We can all proceed by Transporter Tunnel back to Our Appawtment, from which Mummy has promised to make herself scarce (mol)...But We don't think that will be necessary, because We have a big campfire and We can sit round it, while sipping our niptinis and catmint juleps.

Has effuryone got enough to drink, so We can raise a toast to the Birthday Boy?
If anyone would like to lend a paw at the bar, that would help things along.

Is there enough nip? We can always send out for more, if necessary.
And for those who prefurr, the valerian is over there, to the right of the bar.

Fancy Feasties of all flavours are on the centre table. Fish to the right and meat to the left. And don't worry - in the store room at the back, there's plenty more, if this runs out.

The micecream and other desserts - as well as the Birthday Cake - are right over here, on the table to the left.

Now, if you are all here and ready, it is time to reveal the secret of how We circumvented Mummy's pathetic little anti-child anti-cat lock and got at the trashcan under the sink.

It was Trixie who figured it out. You have to hand paw it to her, that is One Smart Cat! 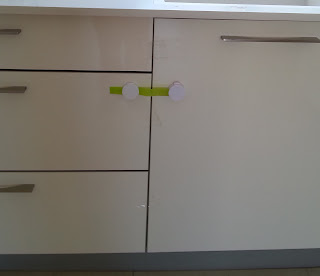 
But look carefully at where Mummy had placed the lock.

And when We had finished, We pushed the cupboard door shut again, and Mummy never suspected that WE had managed to open it! In fact, She didn't know what to think! She was COMPLETELY BAFFLED!

And that's the story of How We Outwitted Mummy (yet again).

So - who needs opposable thumbs? 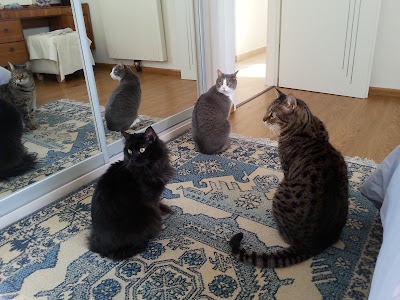 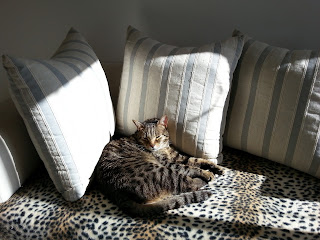 I want to remind you all that the day after tomorrow, Tuesday March 7th, is my birthday. My FOURTH birthday. Naturally, that means a pawty. A big one. A pawty with all my favourite noms. Countless cans of Fancy Feasty in all my favourite flavours - ocean whitefish and tuna, chick-hen, liver, salmon, seafood - you name it, We've got it!
And niptinis. And catmint juleps. And micecream.

And, best of all - YOU are all invited. 5 pm Israel time.
At a secret destination. RSVP - and the co-ordinates will be sent to your transportation devices.

Now, I know you are all waiting to hear how We outwitted Mummy, as we mentioned last week.
Aren't you? 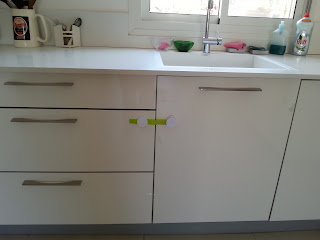 Well, it's like this. Mummy got upset that We were getting into the trashcan under the kitchen sink and rummaging about in it. She claimed We were "making a mess". So She went and bought one of those locks they sell in Mothercare stores and put in on the door of the cupboard under the sink where She keeps the trashcan.


Mummy was sure that by means of this In-furr-nal Device, She had solved the "problem".
And for a while, She had.
Try as We might, We could not open the door.
I tried.
Trixie tried.
And you can bet your Nine Lives Shimshi tried.

But We were not discouraged.
We put Our heads together.

And a couple of weeks ago, We came up with the answer.
And the furry next day, Mummy was furr-labbergasted to find that the chicken bones She had put in the trashcan were all over the kitchen floor.
She thought maybe She had fur-gotten to lock the cupboard door, or that maybe She hadn't locked it propurr-ly.
But when She went to check it, She found that the door was still shut and the lock was intact!
Poor Mummy! She was completely baffled (mol).

How did We do it?

For the answer to that, you will have to attend My Birthday Pawty on Tuesday, when all will be revealed...