Mummy is becoming quite purr-ficient at inventing new games for me and finding new ways to a-mewse Me. In fact, I give her full credit for being attentive to my interests and acting accordingly. For instance, she noticed how I love playing with paper and also how much I enjoy getting inside things. So she found this huge envelope which is big enough for someone to send a kitty by Purr-cel Post: 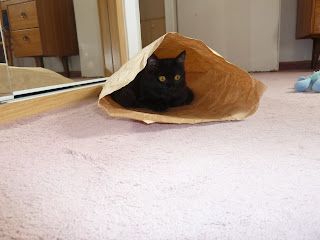 Still - it's not the same as having someone to play with :-(

I have such a lot of news to tell you today!

I am so honoured. My Bloggie has been named  "a joy to read" by Nerissa from Nerissa's Life! Nobody ever nominated me for anything before - of course, I am only five months old and I've only been blogging a month or two, but still...It's very encouraging to know that my efforts are a-purr-eciated!

Yesterday, I met a new Human, a friend of Mummy, who came round to work with my Human on some songs they are going to sing in their choir. This new Human (Auntie Carmiya) brought me a bag of crunchy treats, although I preferred to play with them rather than to eat them (MOL). Now that I know how much Mummy likes mew-sick, I shall make it my business to serenade her every night. I'm sure she'll enjoy that - she serenades Me all the time, she goes about the house singing.

Kitties, I have found a really cool new place to perch - on top of the refrigerator!
Look! 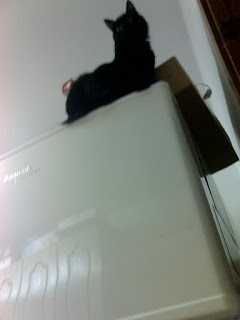 It isn't a very good picture, but I wanted to show you all how high I have risen in the world (heh heh).

Have a lovely weekend, Effurryone!

Mummy and I invented a New Game this week - Shadow Boxing! My Human makes funny shadows on the wall or the door and I have to try to catch them. See how good at it I am! 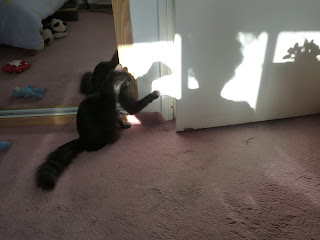 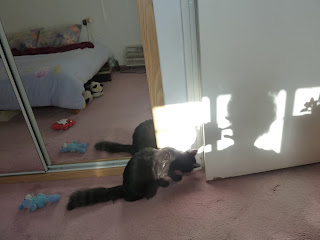 The weather this week has been very warm and sunny, after the snow we had last week, and Mummy has been opening the windows in all the rooms - but when I try to get out onto the window-sill, she shouts at me, Kitties! Yes, she does! She says it's because she's worried I'll fall and use up one of my Nine Lives - and I do apurr-eciate her concern for Me. But it's still Not Nice to be shouted at.

Another thing I don't like is that she doesn't want to play with Me all the time. She says she's busy writing a n-o-v-e-l. I don't know what that is, Kitties! She says it's a story - a long, long story - and that she's always wanted to write and never had time, but that now she's retired, she's going to do some of the things she always wanted to do. Well, that's all very nice for HER, Kitties, but what about ME?! Who is going to play with Me, when She is busy writing her n-o-v-e-l? She promised I would have a little brofur, but I'm still waiting.

I'm getting bored. I think I shall go and dig up some houseplants now, just to pass the time...

I woke up this morning and looked out of the window and got the surprise of My Life!
Everything was WHITE - and there were big, white bits of fluff falling from the sky! 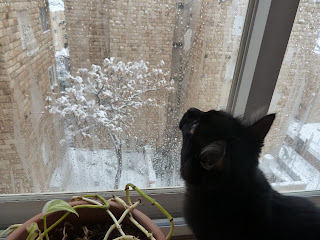 I've never seen anything like it! I tried to catch them, but the glass in the window got in the way and then, when Mummy opened the window, it was SO COLD!!!

I did so want to catch the bits of white fluff but they made my pawses all wet and Mummy made Me go back into the living-room. She was afraid I'd slip and fall off the window-ledge. (I'll admit, kitties, it was a bit scary.)

But it is pretty, isn't it? That's why My Human took so many pictures with her Flashy Box. 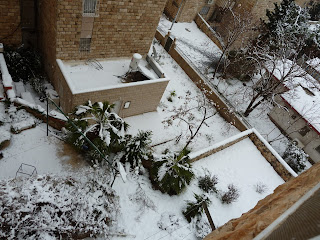 Now I'm going to curl up on the sofa in the study and have a little catnap. See you all later, Effurrybody!

I have had a few disappointments this week! Furr-stly, my Human left Me alone a lot of the time and I had to a-mewse Myself. I suppose I can't really blame her. Her Daddy was in h-o-s-p-i-t-a l (that's a place where they take you when you are ill and they have lots of v-e-t-s to take care of you) and so She was out of the house a lot. But She wasn't happy about the way I kept busy while she was out. And, worst of all, She didn't appreciate all the hard work I put in re-decorating her furr-niture! In fact, she got really upset about it and threatened to send me away, kitties! But I know she didn't mean it. She was just very tired and worried about her Daddy. But he's home again now, so She'll be able to look after Me properly again - and take lots of pictures with the Flashy Box. She hardly had time for that, this past week, so I have only one picture to show you this time. 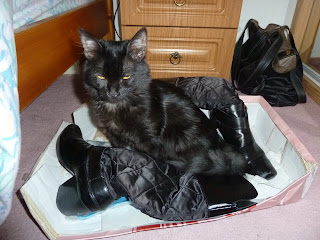 Kitties! I have something else to tell you! Another disappointment!
In a few days, there'll be a new TV channel coming here. It's called Dog TV. No doubt all the Woofies out there will think this is a Very Good Idea - and so it is. But that's not the point, is it? What I want to know is - why is there no Cat TV???

I am Very, Very Disappointed!

P.S. Mummy says to point out that Dog TV is yet another Brilliant Israeli Invention. :-)