You remember the boomies we wrote about last summer, and how we used to hide in the wardrobe among Mummy's clothes, while Mummy had to run down to the Boomie Shelter?

Well, a few days ago, We were just having a little Nap when we were startled to hear the horrid, wailing sound of the Boomie Warning Siren! 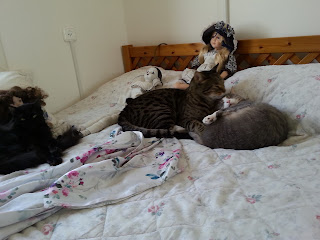 We were about to dive for cover when Mummy said not to worry, it was just a Drill!

Well, We were furry, furry relieved, as you can imagine, but once We had got over our alarm, We began to feel Highly Indignant! What did the Humans at Civil Defence mean by scaring Us like that!?

Mummy thinks it was because the Humans in a country called Iran want to get a horrible kind of Boomie and shoot it at Us. So We have to be prepared.

So we want to call on all the kitties in Purr-sia to tell their Humans not to make Boomies. Boomies are Bad. If their Humans make Boomies, then effurrybody else will make Boomies and start shooting them at each other and a lot of innocent kitties and their Human Mummies and Daddies will get sent to the Bridge.

Please help Us spread the message.

It is I, Queen Trixie, Guardian of the Boudoir and Alpha Kitty Extraordinaire.
I want to update you on some furry impawtant news. Perhaps the Most Impawtant News of the Year!

You remember a few months back, I told you that I had been made a           Purr-fessor of S.S.T. at the Feline University of Jerusalem? (That's Synchronised Sleeping Techniques, for those of you who haven't been paying attention.)
Well, last week, my furrst students passed their end-of-year exams with such success that the University Administration has decided that the course - an experimental one, which has never before been offered at any university - will become a purr-manent fixture and, as a result, I have been granted tenure!

What do you think of that, kitties? 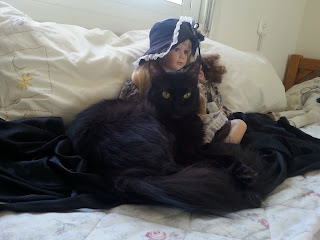 For those of you unfamiliar with S.S.T., I am going to explain the concept, with the assistance of my two best students - Caspurr and Shimshi.

You may have noticed that when two or more kitties live together in close proximity, their sleeping patterns tend to be similar. Not only do they sleep at the same time but they have a tendency to sleep in similar positions. 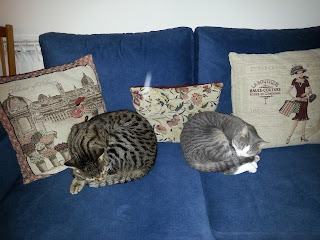 Not quite identical, but furry, furry close, as you can see.

Not only that but, when one kitty moves in his or her sleep, changing positions, there is a high probability that the other kitty will mirror the moves of his or her companion.

These mirror moves don't always turn out quite right: 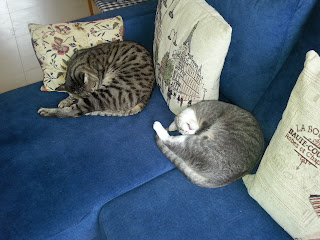 The goal of my S.S.T. course is to enable companion kitties to perform in-sleep manoeuvres simultaneously and in complete synchronisation.

It was not easy at furrst, I have to admit. My students required individual tutoring and close snoopervision: 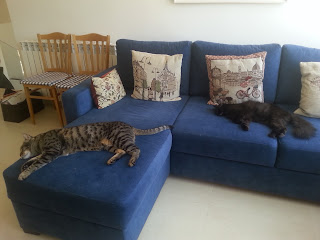 Not quite, this time - but Caspurr learned fast, and by the end of the semester, his moves were nearly purrfect: 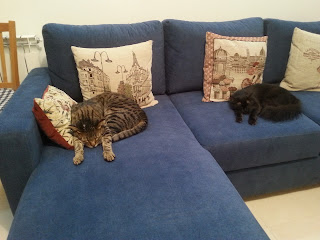 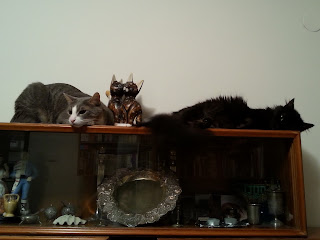 Indeed, there were times when I almost felt like giving up: 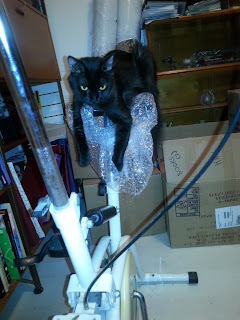 However, I purr-severed, and I am glad that I did. I realised that Caspurr could be invaluable as a Teaching Assistant. Here we are working together, to demonstrate a purr-ticularly tricky position to Shimshi: 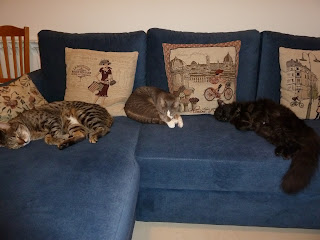 I found that the two of them worked well together, as this next photo shows: 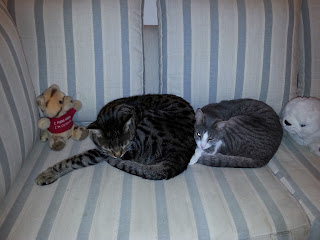 Note the small details, such as the way both cats have the tail firmly held in place by the extended forepaw.

So well did they work together, in fact, that I was miaowtivated to invent some new manoeuvres especially for them, one of which I am demonstrating here: 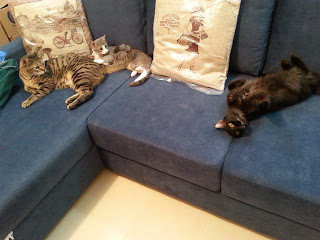 Finally, no less impawtant that the Synchronised Manoeuvres while sleeping, are the Wake-Up and Stretch Techniques to be purr-formed at the end of the exercise. Here, we can see Caspurr demonstrating an advanced Touch Your Toes exercise: 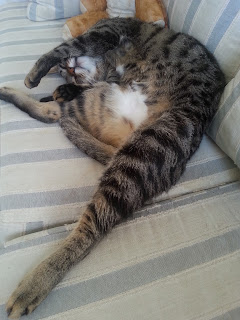 So pleased are We with the success of this course that our hope is to have S.S.T. included as a Recognised Sport at the next Kitty Olympics. We are therefore asking you all to join Us in lobbying the International Feline Olympic Committee (IFOC) to that purr-pose. There is only just over a year to go. Can we count on your support?

I will leave you now with best wishes for a pleasant weekend.

Shabbat Shalom from Moi, Queen Trixie and from my brofurs, Caspurr the Tigger Tabby and Shimshon the Mighty (aka Shimshi).
Posted by The J-Cats at 1:51 PM 11 comments: