It is a fine, sunny (but coooooold) day, here in Jerusalem - and once again, We are pawticipating in the weekend Bloggie-Hops, as We always do, come rain or shine - the Caturday Art Blog Hop, hosted by the Wise and Beautiful Athena and her HuMum, Marie, and the Sunday Selfies Blog Hop, hosted by the Effur So Unpredictable Kitties Blue and their HuMom, Janet.

This week, We have a Surprise for you - an Extremely Rare Ussie!

Yes, Mummy managed to snap all three of Us, together!!! 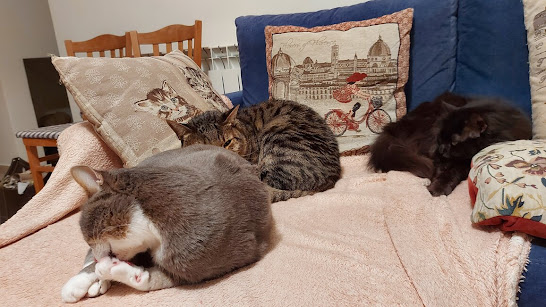 As you can no doubt guess, Trixie did have some reservations as to whether she could trust the mancats not to pounce on her (which, for some reason, they think is furry funny), and is keeping a cautious Eye on them. Still, this was an amazing transformation as she usually makes sure she is at the far end of the sofa from her brofurs.

An Event as rare as this is worth preserving for Pawsterity, don't you agree?

So We made three different artifications of the picture, all using filters and art effects by LunaPic - and you must let Us know which you like best. 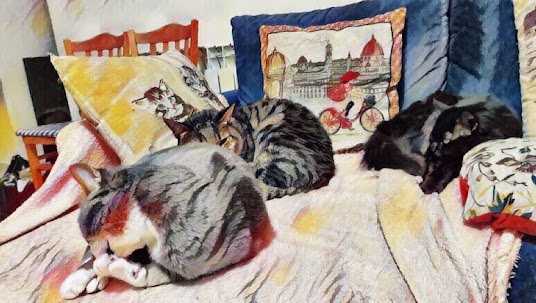 Next, We tried the Space effect at 60%, overlaid with Nebula at 55%. We think it has a kind of Star Trekkie feel to it: Our third and final Expurriment used the Delaunay effect at  50%: 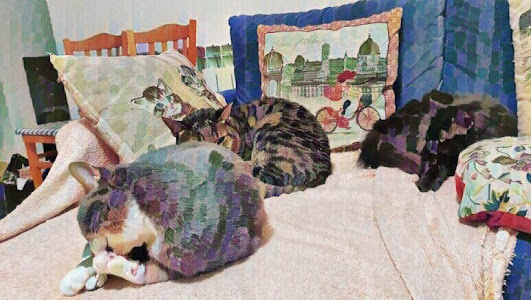 And here are the bloggie-hop badges:

Now, We expect you'd like to know what's happening in Israel with the Evil Mutant Ninja Coronavirus, wouldn't you?
Well, it's hard to give exact figures because yesterday, they reported that the Ministry of Health's dashboard crashed. Besides which, since they are now allowing most people to use home testing antigen kits, rather than having to take the more accurate PCR tests at official testing sites, it's quite likely that more people are sick than is known to the Ministry of Health (although probably not all that seriously, otherwise they would be ending up in hospital).
As far as Mummy can tell (using the data from the official Ministry of Health site which is supposed to be updated 3 times a day, but was last updated yesterday evening), there are now more than 442,000 people infected, of whom 732 are seriously ill. 146 of the latter are on ventilators and 16 are on ECMO machines.

In spite of the spiralling morbidity, the government has eased up the restrictions on schools and whereas till now, if one pupil in a class tested pawsitive, the whole class had to go into quarantine, under the new rules, pupils will be tested (with the less accurate antigen tests) every Sunday and Wednesday, and only the pupils who test pawsitive will be quarantined.

Mummy says "NO COMMENT". You may draw your own conclusions.

On the other paw, many institutions, such as the Israel Opera, the Open University and (most impawtantly), Mummy's Caterwauling Club are opurrating on Zoom, as they did during the Official Lockdown.

When will it all end, that's what We would like to know???

Now, it is time to start blog-hopping. Before We go, We want to remind you to make sure your Humans continue to exercise Good Judgement and take all the necessary precautions. If anything happens to them, who will take care of US, after all?
(Just kidding. We love Our Humans and We know you love yours, too and don't want anything Bad to happen to them.)

Great Ussie and we loved the artwork!!!

Great ussie, that definitely was noteworthy! Our favourite of the art images is the last, we've always liked the delauney effect. The space one is really cool too, and the first also is neat! Well done!

Here in Canada, most provinces have stopped official testing except for those at high risk or in health care. I'm not even sure if you can get a hold of any rapid antigen tests either, demand was so high before the holidays. The province of British Columbia already is talking about treating Omicron in the same manner that we deal with colds and the flu, which isn't going over well with many there. Our federal/national health officer said recently that SARS COVID isn't going anywhere and that we're going to have to learn to live with it. Well,she's quite likely right, but no comment here either, as we just don't know what to think anymore, and this has taken a huge toll in so many ways, not the least right now on mental health.

Anyway, we hope you all have a lovely and safe week. Take care.

What a lovely photo-trio (and great capture for "history"...) Loved all the artistic versions, maybe the third/last was the closest to being a favorite ...
Here, our city health department came to our apt building yesterday to give everyone free home covid tests, tho like you, I wonder about their "true" effectiveness; largely because many will NOT administer to themselves properly. Generally speaking, I mostly feel I've said all I have to say on the pandemic in its entirety over the past two years.
What more can one say? There are too many "stupid" people who ignore its horrors and its impact on our world; too many governments who act to slowly and with too much confusion, and so it goes on and on, and will go on and on. As individuals we do the best we can, as much as we can, each in our own small part of the world. Do for ourselves, family, friends, neighbors, coworkers, for the lesser among us ... and hold hope and faith within. Perhaps some day ...

Congratulations to your mommy getting you all in the same photo! All of the art is lovely, but the Delaunay effect is my favourite. It looks like a real artist painting.
I agree with no comment! All restrictions are being lifted again, no testing etc. I continue to wear my mask, and if someone comes to the door I put it on before I open it. I have to go to the hospital the end of next month (routine CT cancer scan) and I will double mask to go there.

We love that ussie! A rare but wonderful moment, and captured on film! :)

We've been watching those COVID figures for Israel, and we are sorry there is so much conflicting information out there. Please just do your best (we know you will) to stay safe and healthy. XO

Great ussie! All the artsy effects are nice but the first one is our fave x

We love your Ussie and the Ussie Art is all so beautiful too! Y'all be careful with the Evil Covid lurking about.

That ussie is definitely one for Pawsterity. I really like the K3 filter and I'll have to try it. The other two filters are also very nice, and do look either Star Trekkie or impressionist - both of which are wonderful.
With Omicron, we're being more careful than ever. We're double-masking and avoiding any indoor groups of people. Unfortunately, that means we can't eat in some of our favorite places because there are too many people for our comfort. Hopefully by the end of February things will be much better.

We like the third one the best too...there is 'just something about it'!

Not sure what to think of this virus mess... work n healthcare and all of us are just waiting for another explosion of cases within our building, and still they let visitors come in freely. That scares me more than anything, since the peeps I work with are so vulnerable. Since Ii am vaccinated fully, I do not have to test weekly, but I do anyways, because we too can still get this evil variant. And I wear n95 masks at work, and have a few for shopping trips as well...and I gave a couple spare ones to hubby. They are best, way better than our own cloth ones, though I do have filters for them.

What a great pic of all three of you! It made for some nice artwork too. Maybe your mom should get it framed!

Y'all look pawsum. Careful Trixie, those mancats can be pests fur sure. Big hugs

So nice to see all 3 of you cuties together. I don't know why they don't close schools around here and now if an employee tests positive they only need to be out of work for 5 days. The whole thing is crazy. XO

They're all pretty awesome, but we love the Space/Nebula one the best.

OMG! That Ussie is spectacular! Our Mom is in awe (and so are we). We love your artification of the photo as well. Our purrsonal favorite is the starry one! Mom then asked if we would do an ussie, as we have been all on the bed at once for treats since we stated the 3 times a day regime...

I love the third one best! All are good but the third is our fave. And, Trixie...I would not snooze at all with my eyes closed...only zone a little with them open. You know they will pounce! And my mom has opinions as well about yours and her state of affairs.

Good judgement and wearing masks is something we shall be doing for a while yet, rest assured of that.
My, those three pics are a delight! I think, after careful discussion with Mrs H, the third just sneaked int the lead!
Purrs to you all,
ERin

guyz....yur uzziez thiz week iz AWESUM.....we spesh a lee like number two coz itz like yur under de starz out side but still inn side even tho noe starz iz inn side.... cept for ewe.... ;) ♥♥