Yes, it's Me - the Mighty Shimshon (Shimshi for short)!
I've learned such a lot since Trixie and Caspurr last let me talk to you.
For example, I've learned what fun baths and sinks are. 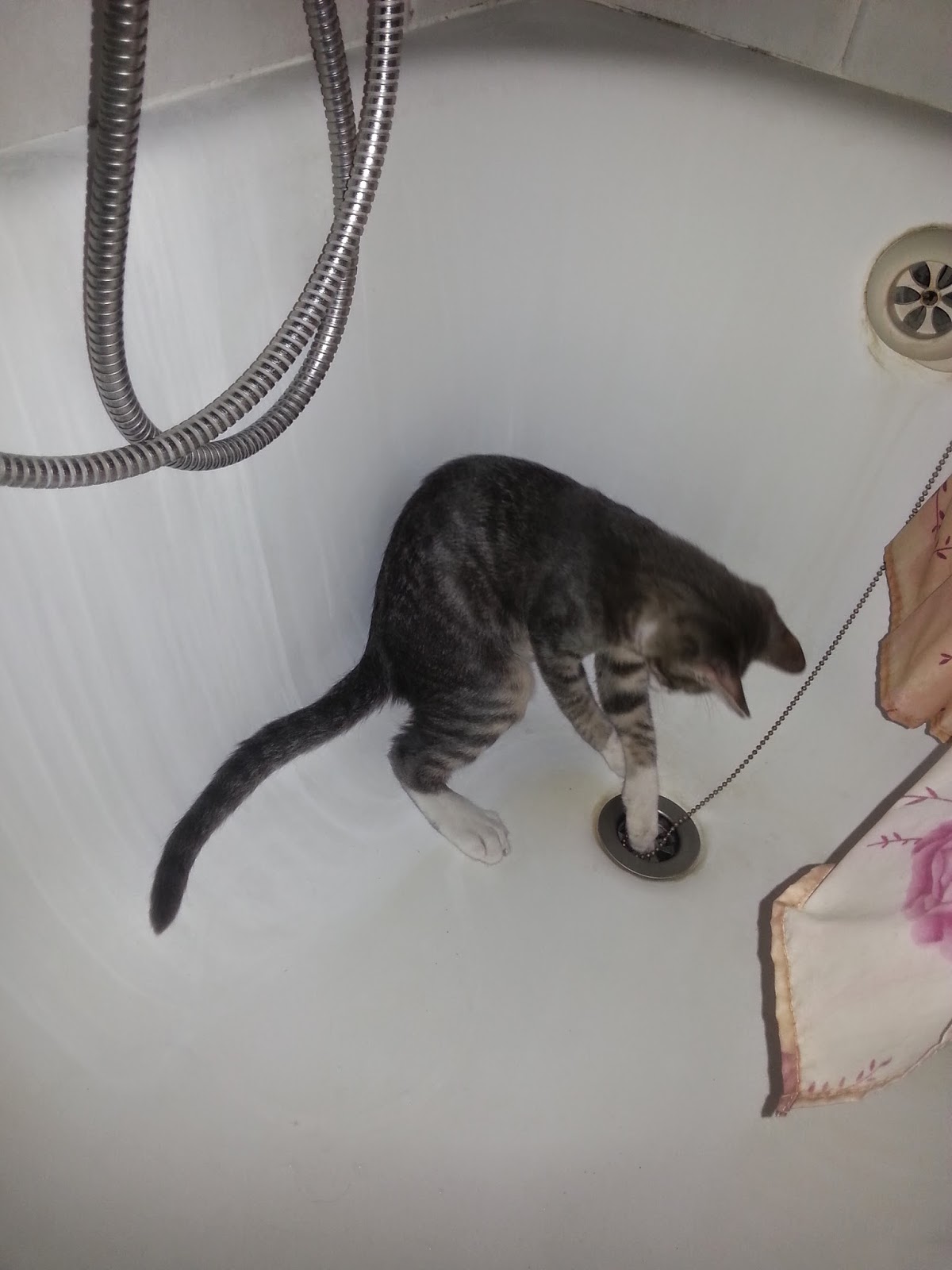 It was Trixie who first gave me the hint. She prefers the sink, but the bath is much bigger and I thought it would be more fun. I even jumped in there when Mummy turned the shower on. Usually, she shuts us in the bedroom when she has a shower because the bathroom door doesn't close properly, but this time, I sneaked in behind the washing machine.

But oh! kitties! I had such a shock.
Not because of the water from the shower - that was fun.
But kitties! what happened to Mummy's fur?

At last I understand why Mummy has to wear "clothes". How ever can she bear the shame?

Trixie and I (Caspurr the Tigger-Tabby) have been teaching Little Shimshi lots of new things this week. At the same time, we had to learn a few new things ourselves - such as what to do when the nasty, scary sirens go off, to warn of an attack of boomies. Our Human rushes down to the Bomb Shelter but She hasn't time to look for Us first, because She only has a minute and a half to get there and We, of course, are never all together in the same place when the siren goes off.

She says that's another one of Murphy's Laws. Who is this Murphy. anyway? He seems to have an awful lot of funny laws.

Anyway, we have been lucky, Mummy says, that we only had the Boomie Warning in Jerusalem three times, since all This Business started. (We have tried to find out what "This Business" is, kitties, but all We know is that there are Bad Humans shooting at Us.)  Mummy speaks on the phone effurry day to her auntie in Ashkelon, which is a city by the seaside, down south. Mummy's auntie says they have boomie attacks there effurry day, even several times a day!

So, to get back to the Things We Have Had to Learn, Mummy says that when the Boomie Warning goes off, we must take shelter somewhere safe, away from windows and not in the bathroom, and definitely not on the balcony, so as not to be hit by flying fragments of glass or ceramics, if a boomie should happen to fall nearby or on the roof.
We think that under the bed, or inside the wardrobe, cushioned by all Mummy's clothes, seems the best option...

Love and kissies to you all, dear anipals and please keep purring that We and Mummy will be safe from the boomies. 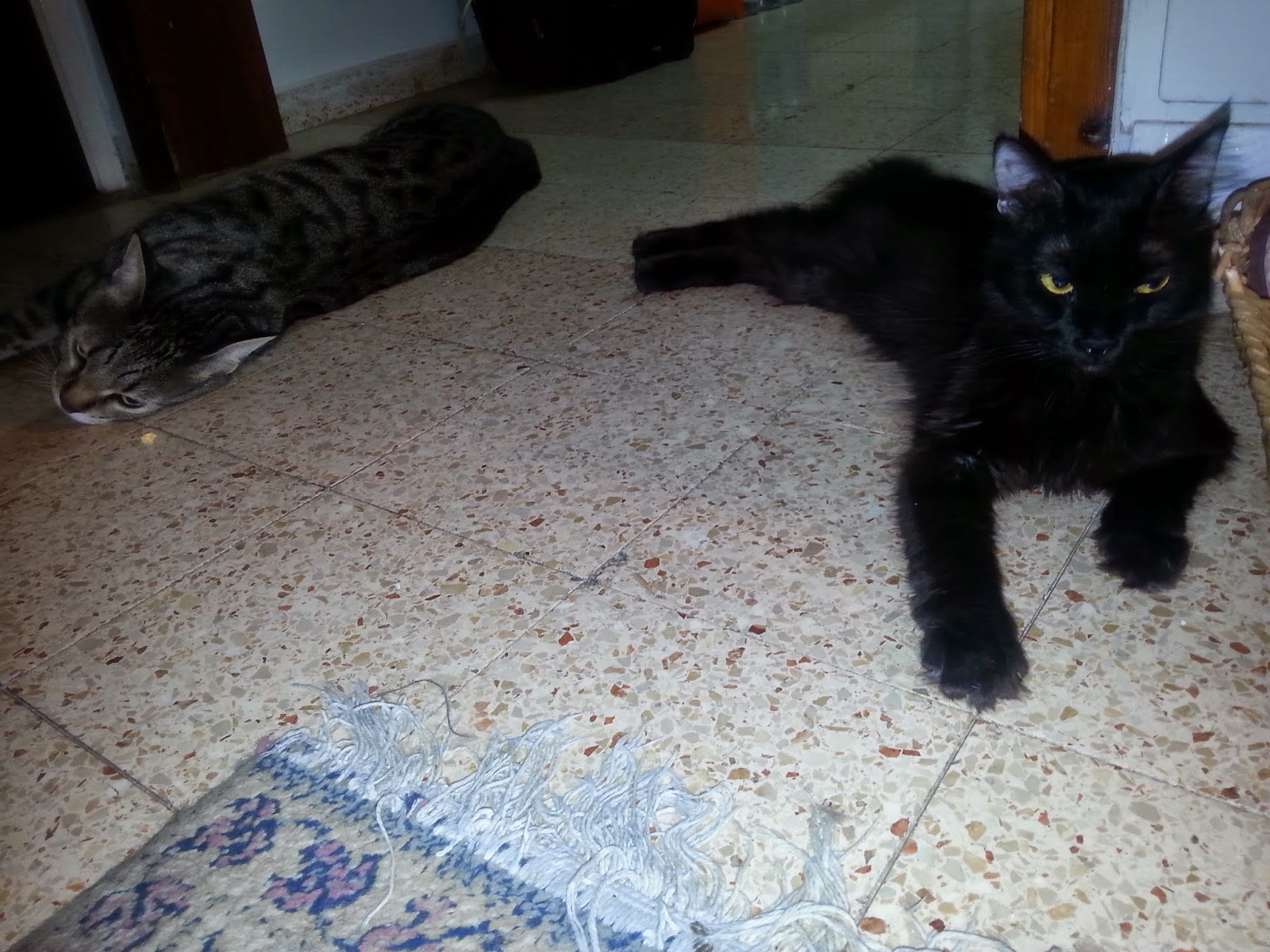 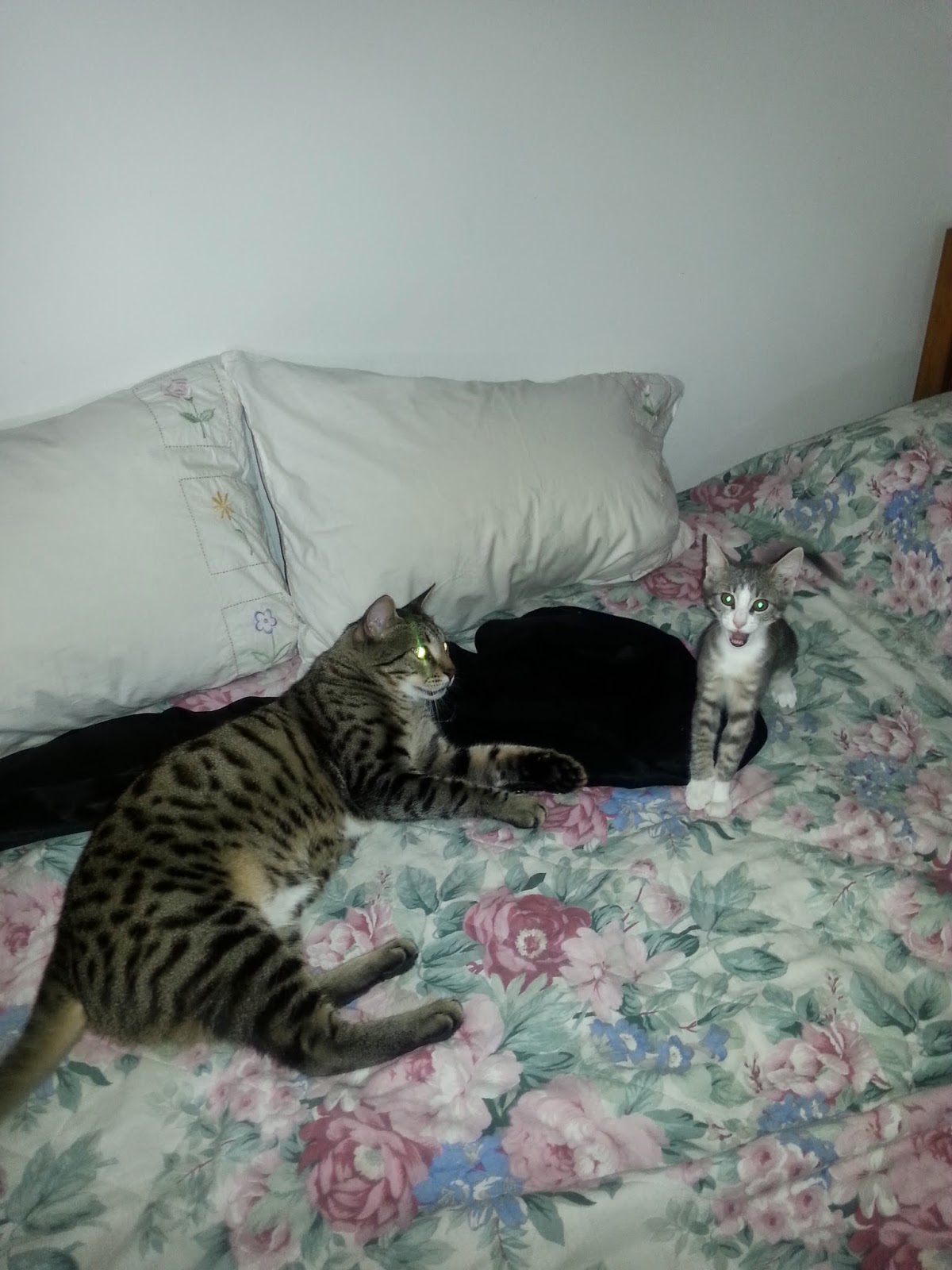 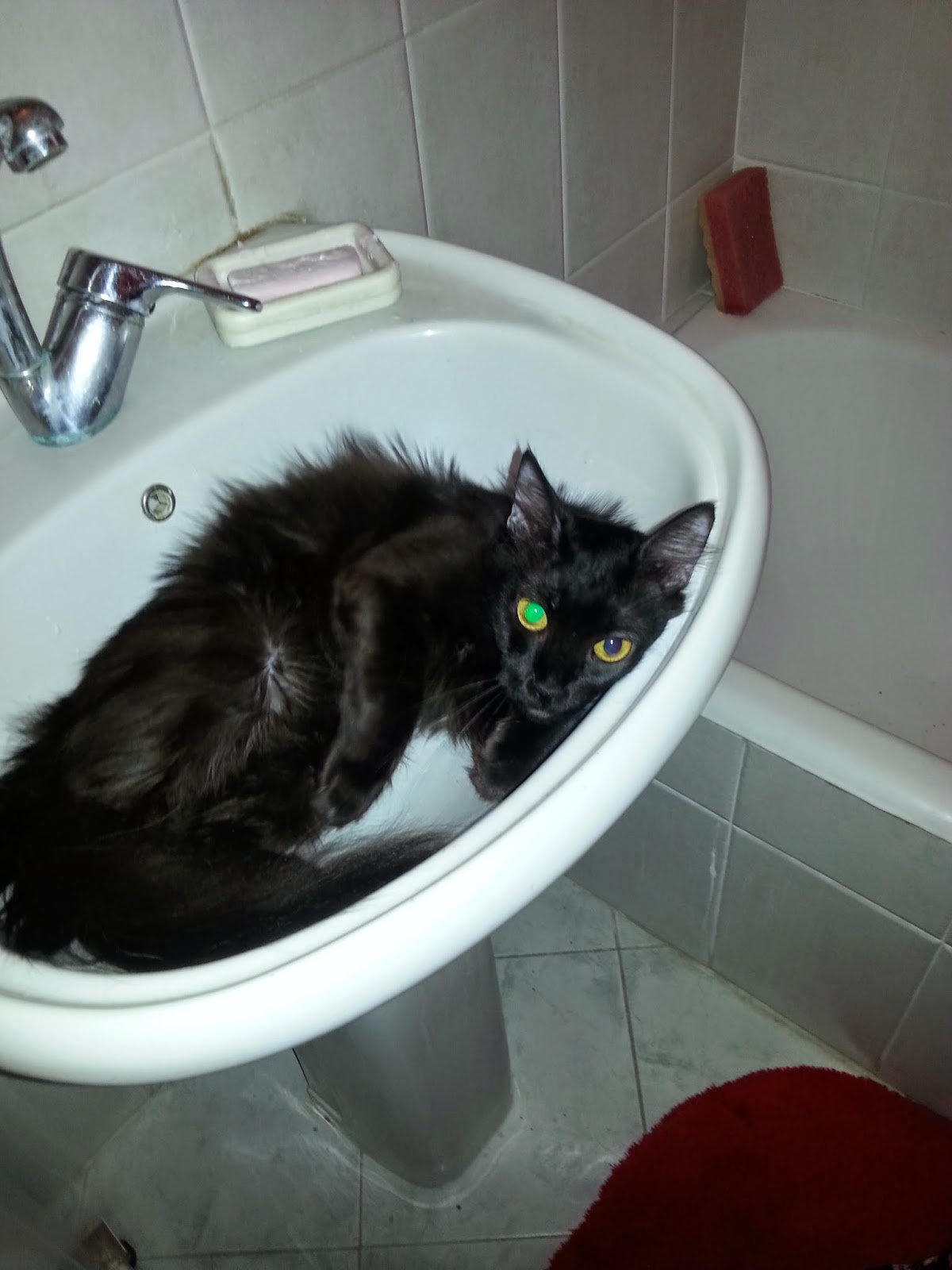 There have been furry strange occurrences this past week! Twice, we heard frightening, wailing sirens, making a horrible noise, and before we could emerge from our hidey-holes to investigate, Mummy rushed out of the house, locked the door and didn't come back for at least ten minutes. And while She was away, we heard nasty, loud boomies!

We often hear boomies, when there are celebrations in the Arab village across the road, and then we can see pretty coloured lights in the sky, which Mummy says are called "fireworks". And She says there's no need to be scared of the fireworks (as if we would be scared of anything!) because they can't hurt Us. But these boomies were louder and there were no pretty colours this time.  And afterwards, on Fursbook, We saw that the boomies were caused by Bad Humans shooting rockets at Us.

Mummy was only away for about ten minutes at the most, and when She came back,  I rushed to greet her, to make sure She was okay. Shimshi slept through it all. 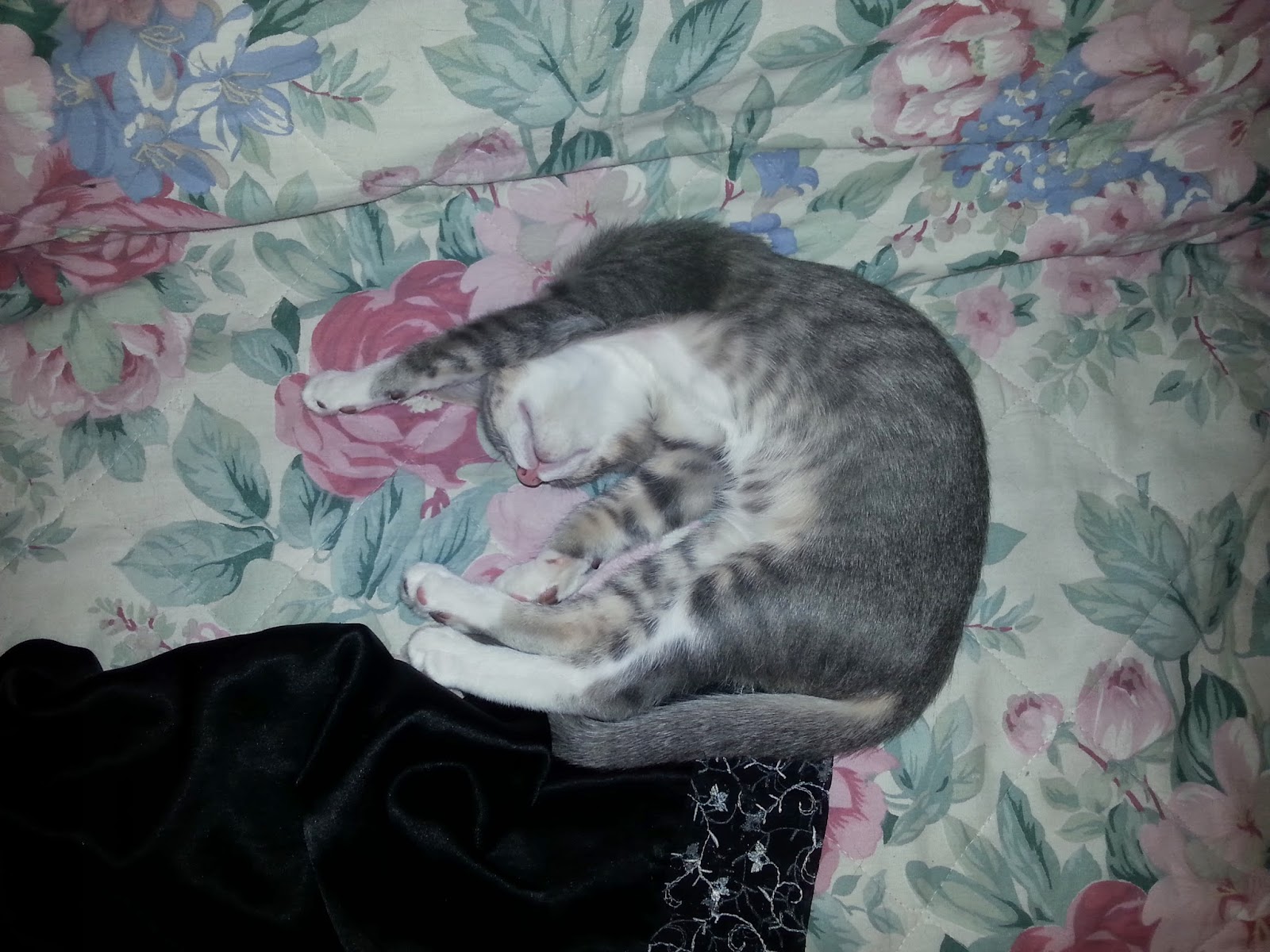 And Caspurr, as usual, took all the excitement in his stride. 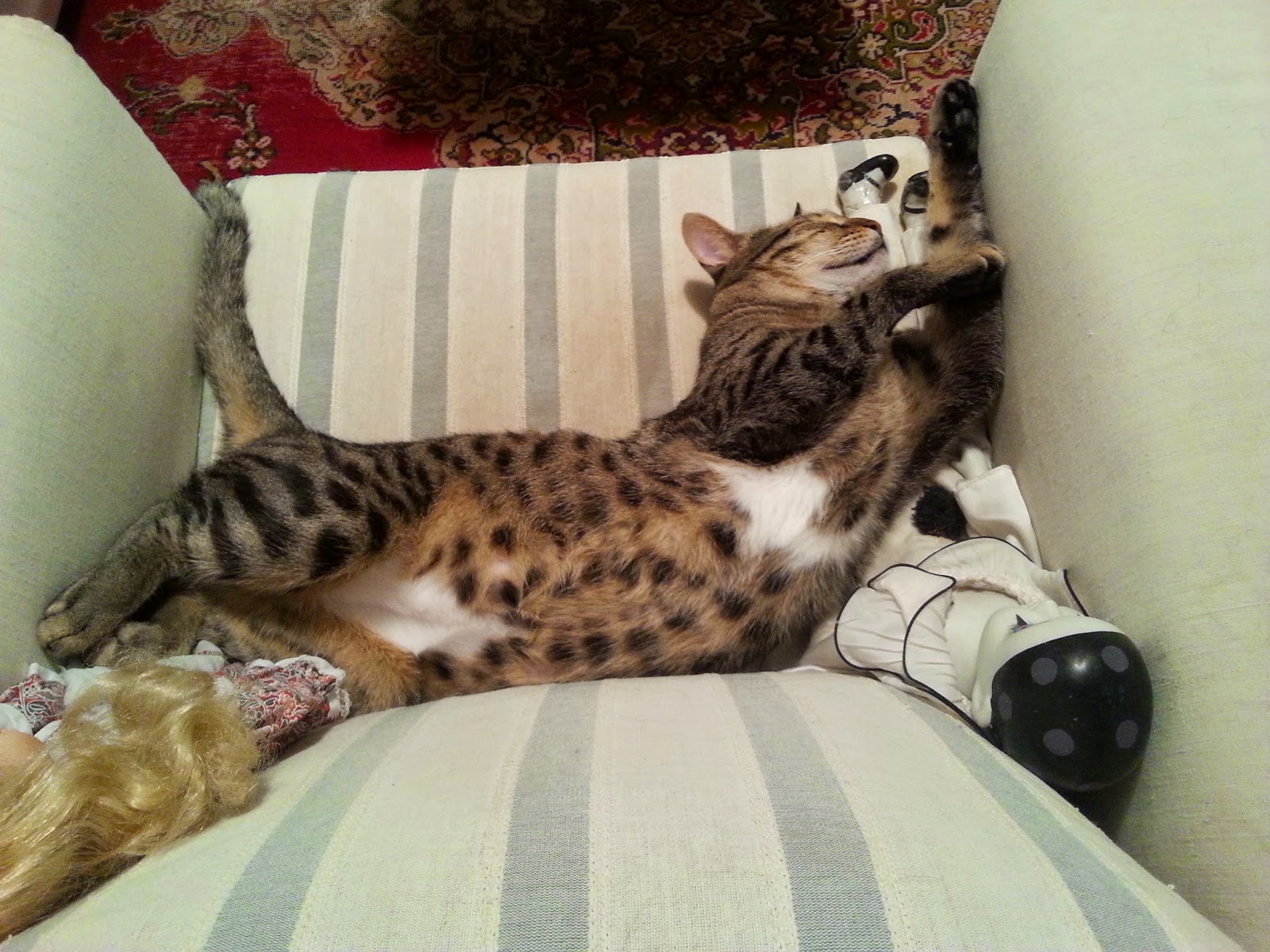 We totally understand if Mummy was frightened of the boomies, but We think that, instead of running off to the Bomb Shelter, with all the neighbours, She should have stayed here with Us and allowed Us to protect her.

A Few Words from the Newest J-Cat 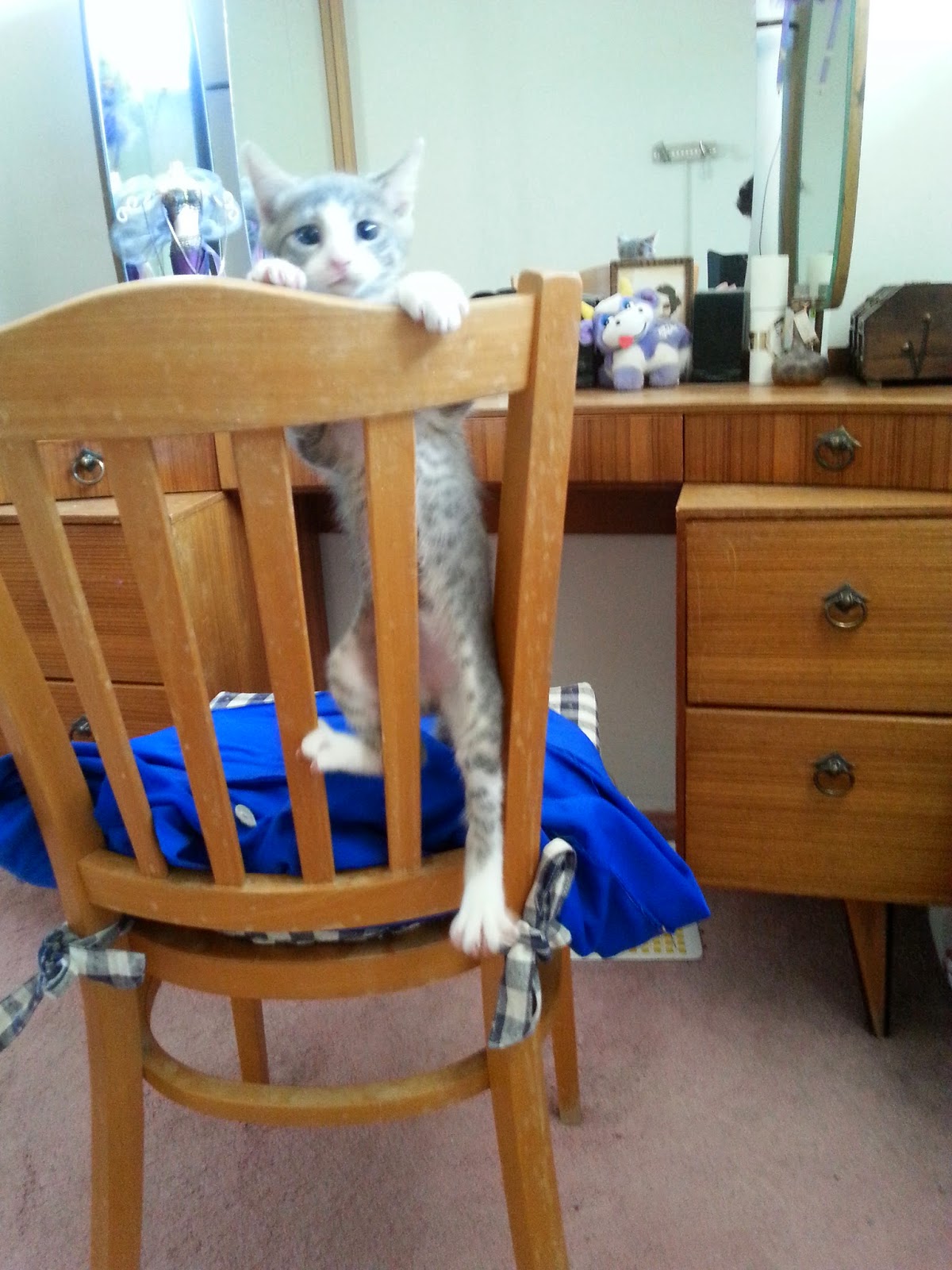 I don't remember much about my early life, before I came to live here with my Human Mummy. I had a kitty-mama once, but she didn't want me and refused to feed me :-(
My Human Mummy says that's not because my kitty-mama didn't love me, but because she was furry young herself and she didn't have enough milk for me and my brofur, so she chose the one who she thought was most likely to grow up.
I was furry frightened when she left me, I didn't know who would look after me, but then a Human lady scooped me up and brought me here, to my Human Mummy, who promised to take care of me.

I remember one night, about a week after I came here, I got furry, furry sick and Mummy held me in her arms for a long, long time, till I started to feel a bit better. And then she gave me my name, the Mighty Shimshon - but that's much too long to say, so they all call me Shimshi.

It's nice here. I have plenty to eat and drink and toys to play with.
And I have a Big Sisfur and a Big Brofur too!

Big Brofur is called Caspurr. He's COOL! He lets me play with him and he's taught me to wrestle and he doesn't mind if I curl up next to him when he goes to sleep. 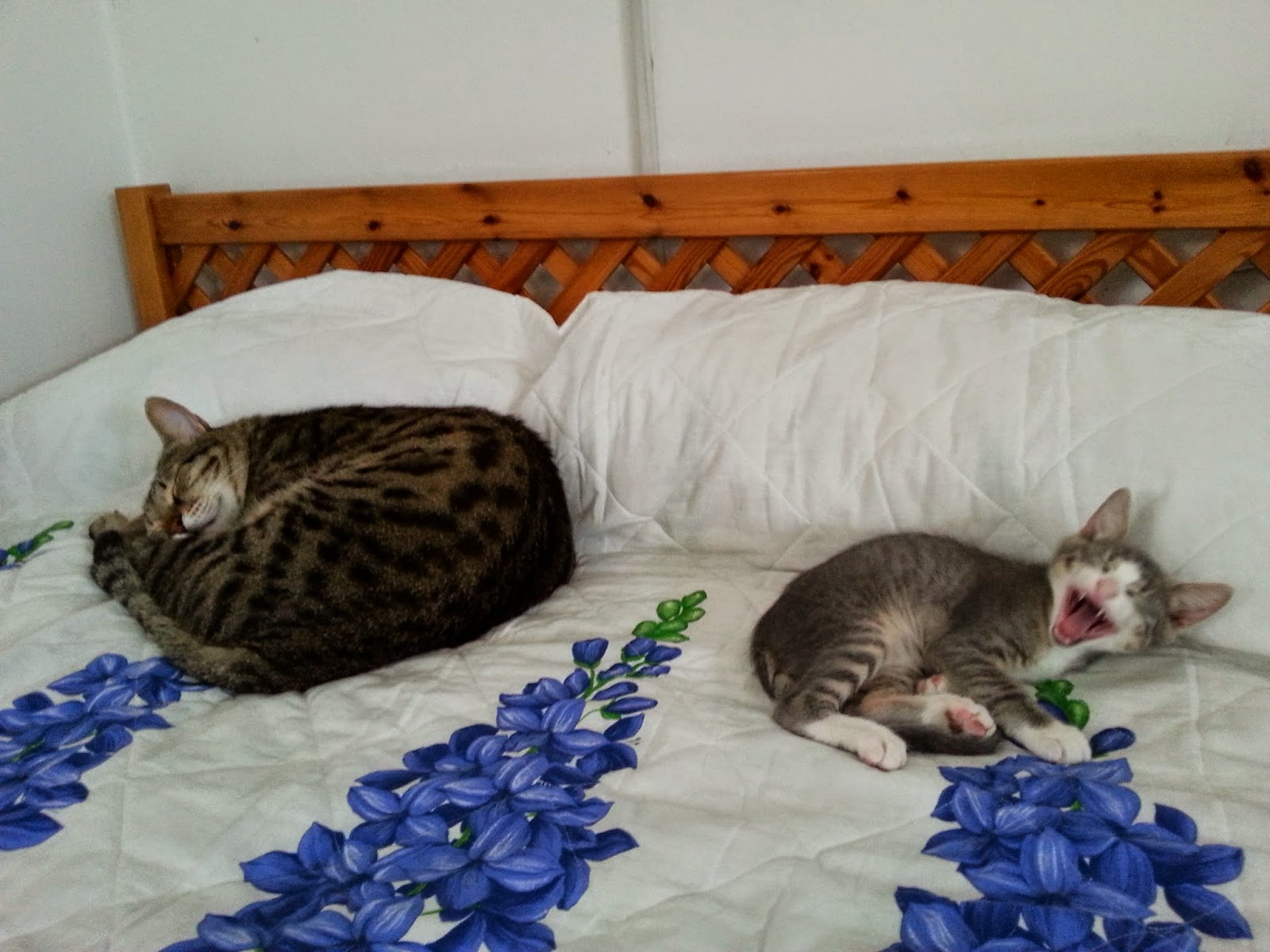 I don't think Big Sisfur Trixie likes me furry much though. She won't play with me and she hisses at me a lot. But then, she hisses at Caspurr as well.
Maybe she just doesn't like boy-kitties. But sometimes, she comes up and sniffs at me, and lets me play "Catch" for about one minute, before hissing me away again. I don't understand it. She has such funny moods. Are all girl-cats like that, I wonder? 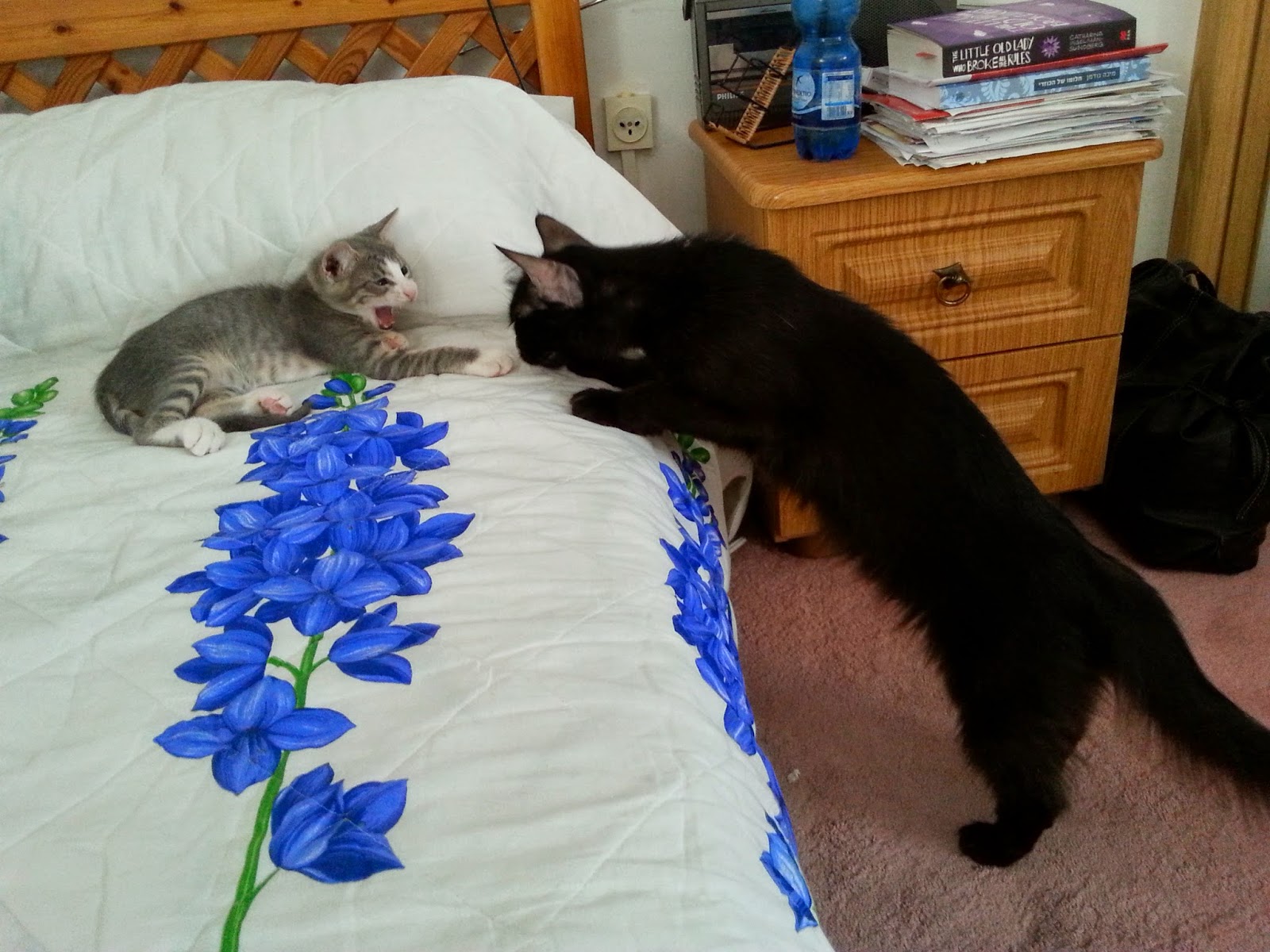 Oh-oh-oh! Mummy is just getting lunch ready! Gotta go! Bye for now! See you all later!