It's Me, the Mighty Shimshon (aka Shimshi) this time.

Mummy has the Sads today, because today is the fourth annifurrsary of the day Precious Possum left her and flew away to the Rainbow Bridge.

As you know, We always commemorate the passing of the Kitties who came before Us - besides which, Possum and I, Shimshi, share something furry special - Our Godmother. Step-Grandma found and brought both of Us to Mummy, so even though he and I neffur met (at least, not in this life), We are Kindred Spirits! Plus, I have pink paw pads like Possum's (well, mine are mostly pink, anyway. There's a little bit of grey also, to match my fur). 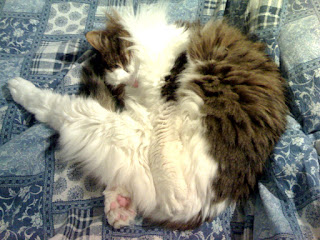 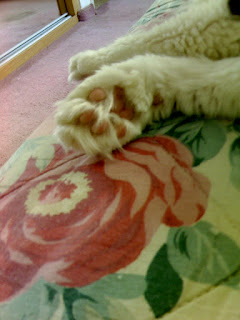 But Trixie and Caspurr each have something special which they share with Possum, also.


Mummy says that Caspurr was specially chosen for her by Possum. They were both big kitties, and both love to roll on their backs with their legs in the air, and wait demonstratively for Mummy to come and snorgle their tummies. 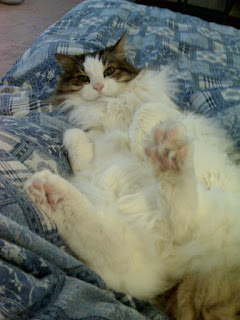 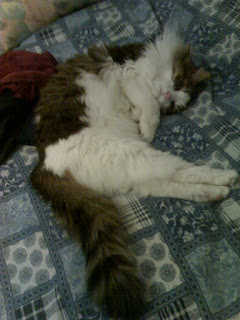 So, you see, Angel Possum is part of All of Us - and even though he is no longer here on Earth, but frolicking in the Land of Everlasting Sunshine Beyond the Bridge, with Angel Pixie and Angel Minxie, Mummy knows that he will always be a part of Her too.
Posted by The J-Cats at 11:18 AM 13 comments:

This evening is the start of Rosh Hashana, which is the anni-furr-sery of when the Great Cat in the Sky created the World. That's like the World's Birthday! Just imagine - a birthday for the Whole World!

Of course, it would be a bit difficult to give the World a birthday present, so it's okay to give each other gifts instead. In fact, it's especially okay for Humans to give their furbabies prezzies (mol).

And just see what Mummy has given Us! 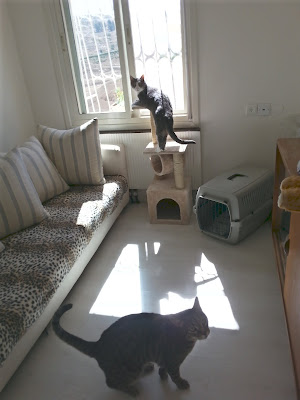 Isn't that the most beautiful Cat Tree you effur saw?


When Mummy first presented it to Us, last week, it had a white mousie attached to it on a stretchy, elastic string. 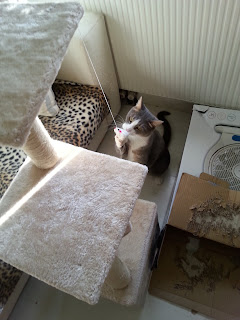 Only Shimshi stole it, of course, and wouldn't let anybody else touch it - as usual. And then, he lost it - again, as usual. 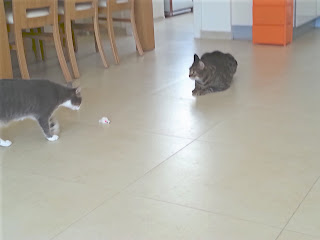 In fact, Shimshi seemed to think the new Tower was his own, purrsonal propurrty.

Mummy moved it into the boudoir, so that Trixie could explore it propurrly. 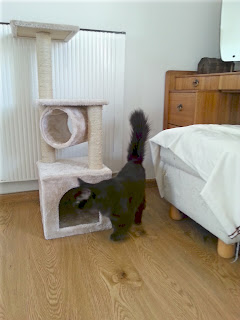 But She has since moved it back into the Guest Kitty Bedroom, as the Baby Mancat has finally figured out that it belongs to All Of Us, and that We have to share. 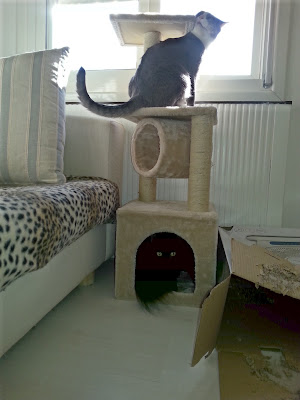 There is plenty of room there for all of Us. It has four floors, as you can see: 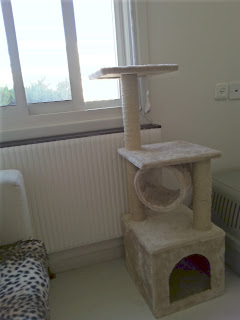 On the bottom floor is a Kitty Cave. On the next floor up, there is a round shelter which also does service as a swing. And on top of that, there are two more floors.
And it is covered and lined with lovely, soft faux fur, in a beautiful shade of fawn.
And it has not one, but three scratching posts, so all three of Us can use them at the same time.

We think it is beautiful, kitties. Don't you agree?
And We are furry grateful to Mummy for having bought Us such a beautiful (and expensive) present.


Now We would like to wish you all a furry happy New Year.