Back To Business: Caspurr's Caturday Art And Sleepy Sunday Selfie

Shavua tov (a Good Week) to you all. 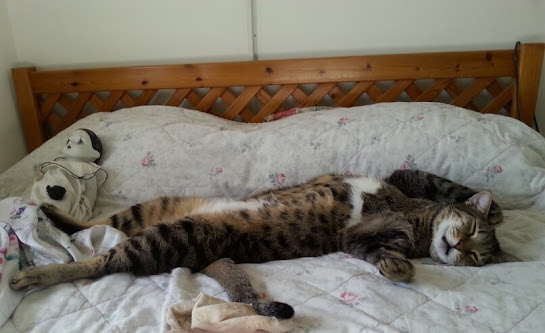 Well, last night We got back the Hour that was stolen from Us earlier this year, when the clocks were put back one hour and Summertime officially ended. I got to sleep an extra hour, as you can see, but I have to say, it's furry depressing when it gets dark so early. However, the weather is still summery - it's expected to remain in the upper 20s Celsius all week.  We did have one day last week when it rained heavily and there was thunder and lightning for a couple of hours - it was beautiful and the smell of the rain was sweeter than any purr-fume, Mummy says - but it was still warm. However, instead of the endless blue skies of summer, there are now little clouds in the early morning and towards evening, which make for beautiful sunsets, like this one: 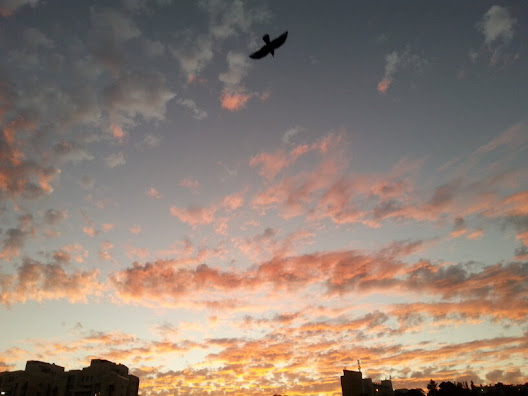 Please note the birdie up at the top in the centre - a lucky shot of Mummy's.  It's a pity the birdie didn't come a bit closer, however. We would have liked to be able to "play" with it (mol)!
Now that We have Our internet connection back again, We are taking part, as usual, in both the Caturday Art blog hop, hosted by the Wise and Beautiful Athena and her HuMum, Marie, and the Sunday Selfies blog hop, hosted by our dear  Furriends the Kitties Blue and their HuMom, Janet.
Here are the blog hop badges:

You can see my Sleepy Sunday Selfie above. Mummy was thinking about how lovely it will be when the museums and art galleries finally open up again and that must have influenced her sub-conscious when she created this week's Caturday Art (with a little help from PhotoFunia): 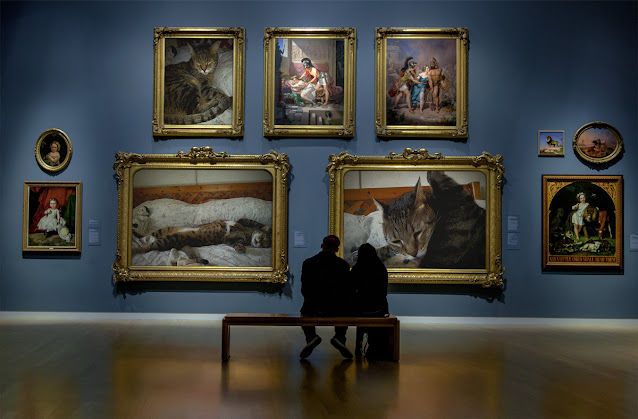 Now, as usual, before We go blog-hopping, We want to remind you all that the Evil Chinese Coronavirus is still with Us, and so it is furry impawtant for your Humans to keep Social Distancing and wear their facemasks (prefurrably with kitty faces on them).
And Most Impawtant of All - Wash Your Paws furrequently!

See you next week.

We're a bit late posting this week, due to being without internet for a couple of days,  and We have missed the deadline for the Caturday Art blog hop, but We still have one more day to take part in the Sunday Selfies blog hop, hosted by the Kitties Blue and their HuMom, Janet.

As today is the eighth anniversary of the day Possum the MagnifiCat received his Angel Wings, instead of posting a selfie of one of Us, We are going to post some pictures of Possum. This isn't by any means a Guest Selfie, because Possum and his sisfur, Angel Pixie, were the Founders of this Bloggie and this will always be his Home.

Possum sent Us a message from the Rainbow Bridge, telling Us which were his favourite pictures out of the many We had to choose from. Each of them tells a story, of course - so let's start.

Furrst of all, here is a picture of Possum when he was quite a young kitten (Mummy doesn't remember exactly how old he was when this was taken) - he had already made it quite clear that, young as he was, he was the boss and the bed belonged to him. 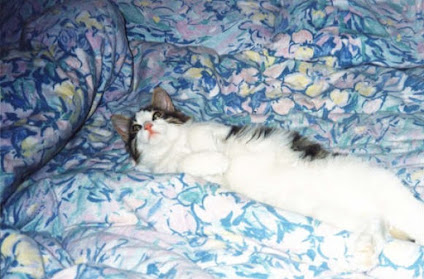 After all, a kitty spends much of his or her time napping and the existence - or lack - of a cosy, comfortable spot for that all-impawtant activity is a pawsible Dealbreaker when it comes to choosing one's Residence, is it not?

At all events, Possum seems to have been furry satisfied with his choice: 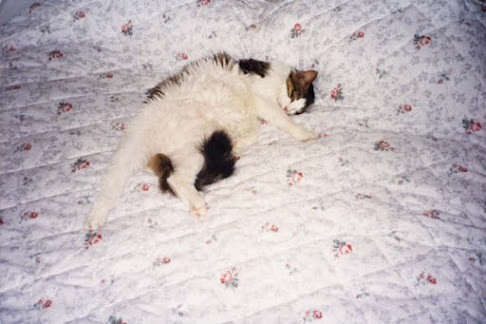 One of Possum's idiosyncrasies (Goodness! What a BIG word - mol) was the way he used to sit on the the armchair, with all four paws dangling down on each side of the armrest: 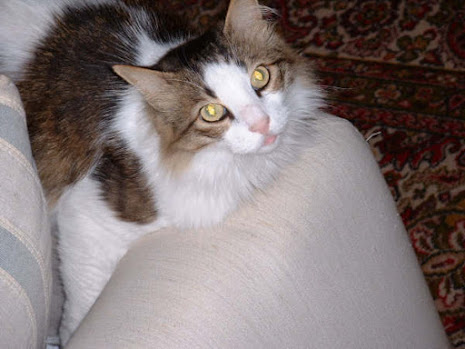 You can only see one leg here - but you get the general idea, don't you?

Like Caspurr, Possum absolutely loved having his tummy rubbed. Many a time, he would jump on the sofa next to Mummy, roll over on his back with his legs in the air, and demand his due. And Mummy could neffur resist: 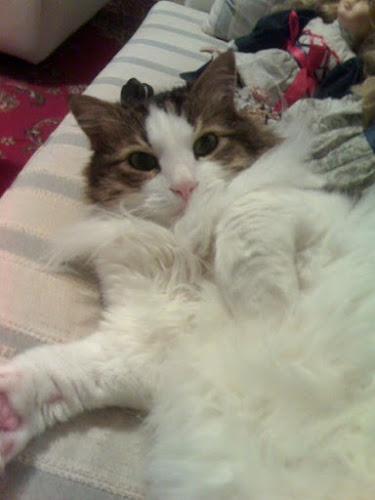 Finally, here is a picture of Angel Possum displaying the extraordinary floofiness of the tail for which he was justly famous, and which earned him the name "The MagnifiCat". A more magnificent tail it would be hard to imagine! 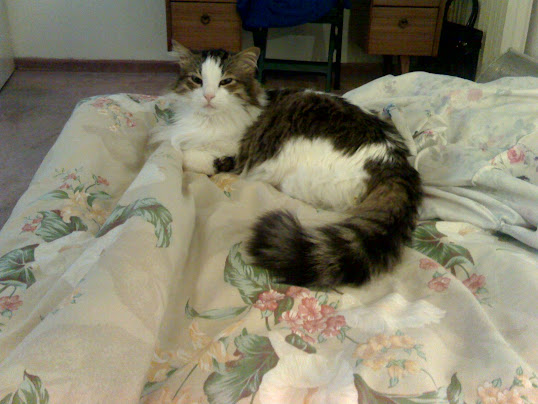 This latter is the picture which will repurresent the J-Cats in the aforementioned Sunday Selfies blog hop, whose badge is herein displayed:

We love it when Mummy tells Us about Possum and Pixie and Minxie, the kitties who came before and We are proud to be the Guardians of their Legacy. We hope that this post will bring fond meowmories to those of you who knew Angel Possum - and will be of interest also to those of you who did not have that purrivilege.

Now, before We go, We want to remind you once again to make sure your Humans continue to stay safe, wear their masks, keep socially distancing and above all (this is to you too, kitties!) - WASH YOUR PAWS FURREQUENTLY.

Trixie on the Telephone: Caturday Art and Sunday Selfies

Have you noticed how Humans seem to have no sense of Timing and are always calling Us to come and take Selfies at the most inconvenient meowments?

For example, I was awaiting a furry impawtant telephone call when Mummy burst onto the scene and demanded begged that I repurresent the J-Cats in this week's Caturday Art Blog Hop, hosted by the Wise and Beautiful Athena  and her HuMum, Marie, and in the Sunday Selfies Blog Hop, hosted by the lovely Kitties Blue and their HuMom, Janet. 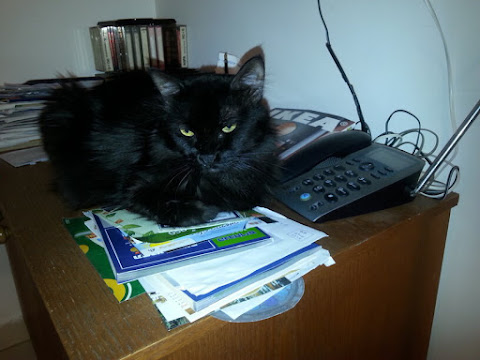 No, I was NOT anxiously awaiting a call from a Mancat!  As if!!!  I, Trixie, Queen of Hearts, am at no Mancat's beck and call!

If you must know, I was waiting for the pet supply shop to call back with news if they had what I wanted Mummy to buy.

This picture is Our Entry in this week's Sunday Selfies Blog Hop - and here is their badge:

We artified it with a Halloween theme from PhotoFunia, for the Caturday Art Blog Hop, whose badge we present below:

Halloween is not celebrated here in Israel, but since Our own High Holy Days and festivals are now over, and We have nothing until Hanukkah, in two months time, We'll take what We can get (mol).

So, what do you think? Spooky Black Cat surrounded by Pumpkins. Not bad, huh? 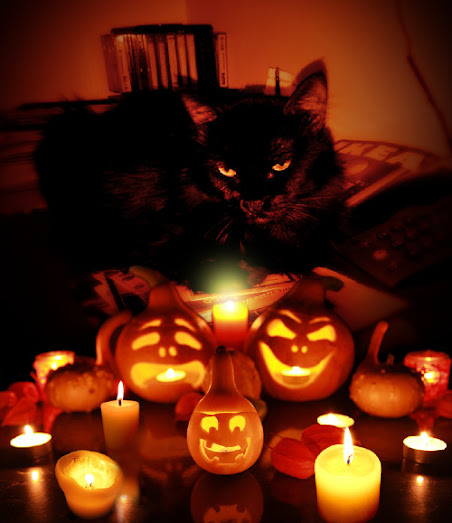 We are still in almost full lockdown here, but there are hopes for a partial easing of restrictions next Sunday. In any case, many Humans are openly defying the regulations - which We think is furry foolish of them. Not Mummy, though. As usual, She is being a Goody Two-Shoes Law-Abiding Citizen and sticking to the Letter of the Law.

We need you all to understand that the regulations are for Your Own Good. We don't want you getting sick and unable to care for Us. Besides which, We sort of love you. I know, We don't always say it,  but if this Pandemic has taught Us one thing, it is that you can neffur be sure your Loved Ones will be here tomorrow and if you wait to tell them you care - it may be Too Late.

So remember, Effurryone - remember to stick to the rules and regulations. They are there to keep you safe from the Evil Chinese Coronavirus. Make sure your Humans do so too. Remind them, if they must go out, to wear their facemasks, keep to Social Distancing guidelines, and always - but always - wash their paws.

And now, Shavua Tov - have a Good Week. And let's BLOG HOP. 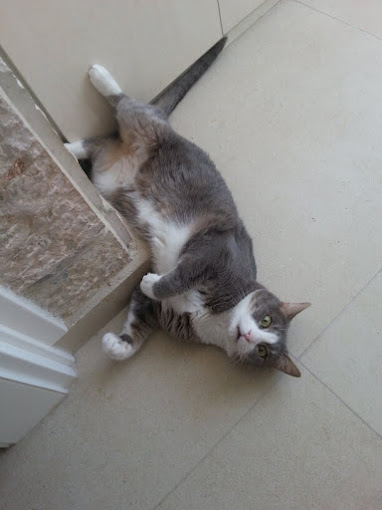 Sukkot is one of the happiest festivals for Mewish cats and their humans, when We have lots of guests join Us in the Sukkah, and friends and families who might not have seen each other all year have a chance to get together. Mummy's brother, who lives in England (the one who claims he doesn't care for cats - but We don't believe him), usually comes to visit for Sukkot. But this year, because of the Evil Coronavirus, he can't come and as for Us, the country is again in full lockdown and people are supposed to stay home and celebrate only with their nuclear families, who live with them!  Mummy is furry upset about that, as you can well imagine. The Zoomie app is no real substitute. (We don't understand, anyway,  why they call it a Zoomie app, when effurryone stays where they are. When We do zoomies, We are all over the place!)

We have seen on other bloggies that today, October 4th, is also World Animal Day - known, too,  as World Pet Day - an International celebration for Animal Rights and Welfare. Naturally, We wholeheartedly support that too.

As usual, today being Sunday, We are taking part in the Sunday Selfies Blog Hop, hosted by Our Furriends, the Kitties Blue and their HuMom, Janet.

Here is their badge:

And, of course, We are also taking part in the Caturday Art Blog Hop, hosted by the lovely Athena and her HuMum, Marie.  Here is their badge:

To artify my already arty-looking selfie, We used the Smoke Art effect from LunaPic, at 60%. How do you like it? 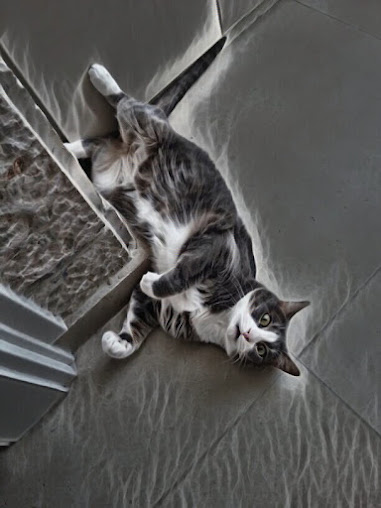 Now We have to go as Mummy is expecting a visit from the plumber, because there is a leak in the bathroom (which, naturally, manifested itself on Furriday evening, since, of course, these things ALWAYS happen at the weekend - and especially a holiday weekend. And the fact that the whole country is in lockdown was just the icing on the cake!)

Before We go, We would remind you once more to stay safe, observe all the rules put in place to purr-tect you and your Humans from the Evil Coronavirus which is still lurking out there, and remember to Wash Your Paws furrequently!