We are ever so excited! Why? Well, We simply love weddings. So, when our human told us that today, far away over the sea in the land where she was born, a Prince is marrying his True Love and that we could actually watch it on the big screen with the moving pictures, we naturally said: "Count us in!" We Felines are real softies when it comes to Romance and have often been known to lend a helping paw, when necessary, to a deserving pair of human sweethearts. (You have only to think of Puss in Boots.)

We would, of course, have liked to be there ourselves, especially at the wedding banquet (where they are sure to serve all our favourite flavours of Fancy Feast - not to mention caviar) but, as we said, it is far, far away and we would never be able to make it back home in time for Shabbat so we will be watching it here and wishing all the best to Prince William and Miss CAT Middleton. May they live happily ever after - and have lots of lovely kittens.
Posted by The J-Cats at 9:44 AM 9 comments:

The festival of Pesach, which our human is celebrating this week, has caused us to devote considerable thought to the civilisation of Ancient Egypt. Did you know, Fellow Felines, that our ancestors in Ancient Egypt were held to be sacred animals and that one of the most important of the many deities worshipped by the Ancient Egyptians was Bast, or Bastet, the Cat Goddess? In such high esteem were our ancestors held by their humans, that when they crossed the Bridge, they were mummified, just like the Pharaohs and other Egyptians of high rank. The honour accorded to our Feline Ancestors was such that the penalty for killing one, even accidentally, was - DEATH.
Alas, We are no longer treated with such reverence and in modern Egypt, as, indeed, throughout the countries surrounding the Mediterranean Sea, there are many hundreds of thousands (if not more) of homeless pussycats, who are forced to scavenge for food and shelter wherever they can find it and who are often cruelly mistreated by humans. We - Possum and Pixie - are so lucky to have a human Mummy (no connection with ancient Egyptian burial practices - MOL) to love us and feed us and minister to our needs (and She is very lucky to have two such noble Felines as Us, if the truth be told) but We would like to ask you all, at this festive season, to remember those kitties less fortunate than ourselves and purr-ay that they may all find loving homes and caring humans and that the Days of Glory of the Feline Species may return once more. 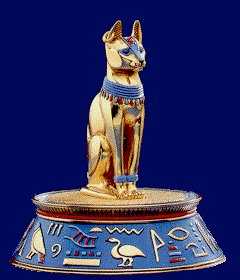 Yes! Yes, yes, yes!
She has done it! Our human has finally figured out what to do in order that We may leave comments on the blogs of other Felines. She says that all that was necessary was to enable something called "Third Party Cookies". We aren't sure what that means exactly but if it involves cookies, We feel it must be something good. We like cookies - especially when they have been dunked in milk. We think chocolate chip cookies are the best, but She won't let us have them, because She says chocolate is Very Very Bad for pussycats. We also like parties and We aren't quite sure why We have to wait for the third party. We haven't had even one party yet, but We have still managed to leave comments for other kitties to read on their blogs.
So now that that is all sorted out, We shall be coming to visit some of you purr-sonally very soon now. Watch out for the J-Cats!
Posted by The J-Cats at 3:50 PM 10 comments:

We would like to take this opportunity to wish our human Many Happy Returns of the Day. Although it seems sometimes that we take her too much for granted, we are always conscious of her boundless devotion to Us, her self-sacrifice (such as when she gave up a trip to Eilat with her friends in order to take care of Possum, who was very sick) and her dedicated service. We know, of course, that We are eminently worthy of such devotion, but still, it isn't every human who can rise to the challenge and prove themselves worthy of being allowed to serve Felines such as Us.
And deep down inside - We really do love her. Yes, We do -  and on this, her Special Day, We will give her the name she has earned and say:

This is so furr-ustrating! We made our human set up a new blog, just for Us, so that We could hang out with our own friends, but We are new to Blogger and we can't understand why, when we try to comment on some other kitty's blog, our comments don't appear! Furthermore, although We have read the "help" pages, we still don't understand how to become "followers" of other feline bloggers.
And, as if all that weren't enough, we are unable to change our template!
Grrrr!!!!!
Posted by The J-Cats at 6:53 PM 2 comments:

Yes, it is Us - Possum and Pixie, the J-Cats (Jerusalem Cats). Here We are, at last! We know you have all been eagerly awaiting Our arrival. Our Human has been promising us our Very Own Blog for such a long time and today, She finally made good on her promise. It's all very well posting on her blog, but We do occasionally feel the need of some privacy. This is our very own special place, where We can hang out with our Feline Friends (and We don't mind socializing with C-A-N-I-N-E-S either, if they promise to behave with due decorum and not chase us).
We hope to hear from you all in the very near future. Some of you We already know and We hope to make many, many more friends now that We have a place of our own. So hurry up and drop us a line or two. Remember - Time and Tide waiteth for no Cat.
Posted by The J-Cats at 4:06 PM 2 comments: