The Complaints and Calamities of Caspurr


Well, it happened! I was so hoping She would fur-get, but She didn't. You see, the Evil V-E-T sends her  postcards effurry year to remind her, and sure enough, the other day She said it was MY turn to go for my annual "shots" (I HATE that word, don't you?) and She pushed Me into the Kitty Carrier and hauled Me off to The Torture Chamber   The Evil, Stabby Place Dr. Einat.

As you can imagine, I was Most Displeased. I sang the Song Of My People, furry, furry loudly, all the way there - so loudly, in fact, that the Taxi Driver asked anxiously what was the matter with me. And My Human told him that it was NOTHING, that She was just taking Me for My Annual Checkup and Shots.

It may be Nothing to Her, being shut up in a Cage and taken to A Place You Do Not Want To Be, but I can assure you, it was not Nothing to ME!

I could have done some Real Damage to the Evil V-E-T and her Assistant, with My Magnificent Talons, had I chosen to do so. 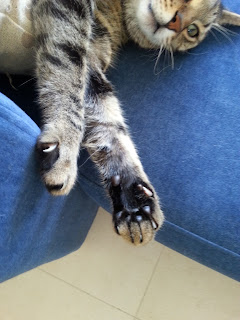 But fortunately for them, when all is said and done, I neffur fur-get that I am a GENTLEMANCAT, so I kept my claws sheathed and let them Have Their Wicked Way With Me.

But Worse was yet to come.
I was weighed and found not wanting. In fact, I had gained 600 grams since last year.
Kitties - I weigh 8.5 kilos! And they told Mummy that if she loves Me, She will put Me on a strict diet!  (DIET. That's another word I hate!)

After that, Mummy cut My Meals down to TWICE a day, instead of THREE TIMES!
I complained about that furry vocally and started eating paper and bits of plastic bags to make myself vomit all over the place. Yesterday, Mummy decided to go back to three meals a day, only much smaller.

We'll just see about that (heheheh). 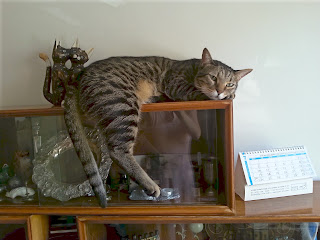 Caspurr, King of the Tigger-Tabbies
Posted by The J-Cats at 1:11 PM 11 comments:

The Further Trials and Tribulations of Trixie

Greetings, Effurrybody!Furrst of all, I want to remind you all that today, le quatorze juillet, was - is - purr-ecious Pixie's birthday. I mention this because, as I have said before, it was Pixie who chose Me especially and sent Me to Mummy, when Poor Mummy was left with no kitties at all after sweet Possum joined his sisfur Pixie at the Rainbow Bridge nearly four years ago. So I am eternally grateful to darling Pixie Who Went Before, and always remember her and honour her on Her Birthday.Now, however, I have a Serious Complaint to make about what Mummy did to Me today, of all days!I was sitting in My Tunnel, minding My Own Business - as you can see from the pictures below. 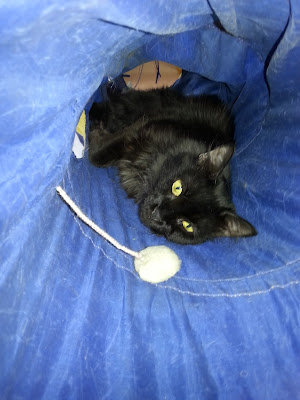 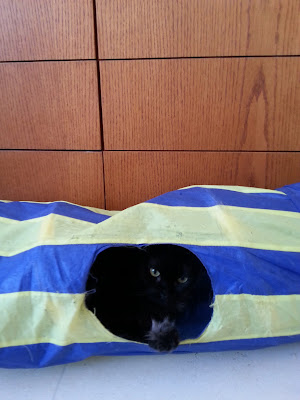 As I say, I was simply meditating on the  Thought of my "ineffable effable Effanineffable
Deep and inscrutable singular Name." 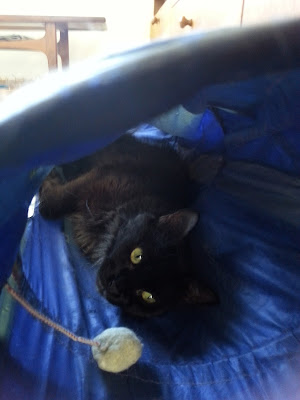 And what did Mummy do?
Kitties, She tricked Me!
She produced a handful of My Favourite Crunchy Treats and LURED Me out of my Cosy Nook, and when She had done that, she Kitnapped Me and locked me up in my Kitty Carrier and told Me were were off to visit the Evil V-e-t for my annual Shots!

And as if that wasn't bad enough, kitties, She decided to take Shimshi along too, although his shots aren't due till next month, so as to save time and effort.

Now normally, I settle down quite quickly in my carrier, once the door is shut and I realise it's better to give in with a Good Grace - but Shimshi's presence seriously unsettled Me and We both started rattling the door of Our Prison and trying to get out. And when Mummy tried to pick up the Kitty Carrier, We made ourselves as heavy as We could. In the end, Mummy gave up and decided to take just Me.

Once We got in the taxi, I settled down, as I always do once the car starts moving. But once we got to the Evil Stabby Place, and I saw Dr. Einat preparing THE NEEDLE, I freaked out again and wouldn't let anyone touch Me. And I scratched the v-e-t's assistant Maia and made her hand bleed (once, I scratched her face!).

So then they put me in that horrid cage which can be made smaller, and they squeezed me inside it and I couldn't move or turn round or anything, and I was afraid they were going to torture Me. But, in the end, the Evil V-e-t just stabbed Me and filled out a form to say I had had my annual shots. She was going to examine my toothies but I wouldn't let her. If anyone had tried, I would soon have shown them just what Purrfect Condition my fangs are in (heheheh).

Oh, and while we were there, I was weighed and Mummy was furry pleased to discover that I have put on almost half a kilo, now that I have got my appetite back. I don't understand why She wants me to get fat, kitties! She, herself, is always complaining about how she has put on weight. So you would think she would understand that I want to retain my lithe, svelte figure!
Well, I shall probably lose that weight again over the next few weeks, because I don't like the new kitty food she got for Us. The shop didn't have any of our usual dry kitty food, so She had to get something else this time. It's called "Happy Cat" - but even though the boys eat it (they don't like it as much as our regular food, but they'll eat just about anything, those greedy mancats), I am furry far from being a Happy Cat and will only eat it because there is no choice. Fortunately, at the weekend, We get Fancy Feast!