If you haven't guessed already, it is I, Trixie, Queen of the Black Panfurs and Alpha Cat Extraordinaire, reporting.

I must tell you, kitties (and other anipals) - Mummy has let this "Hostess with the Mostest" business go to her head!
Mummy says that now We have a nice big appurtment, We can do lots more "entertaining". That's what She calls inviting all sorts of Intruders into Our Home! Do you think She consulted Us befurrhand?
Think again!

Do you know what She did last week? She invited over all her friends from her Caterwauling Club to celebrate the lighting of the eighth and final Hanukkah candle with her. It's lucky not all of them could come, because that would have meant thirty people invading Our Home! As it was, there were about twenty, including two human kittens belonging to one of Her friends!

Mummy shut Us up in the bedroom while the Intruders were here. It's lucky She didn't shut Us up in Our Own Room, because the bedroom is much bigger and has more places to hide - which was just as well, because She brought in some of her friends to see Us, during the evening. We know She is furry proud of Us and likes to show Us off, and her friends literally begged to be purr-mitted to meet Us, but We are not exhibits in a Mewseum or a Zoo!!!

Anyway, when Mummy brought her friends in, Shimshi was the only one to cooperate. He was sitting on the bed and he let a couple of the girls stroke and pet him. Such vanity! But they complained afterwards that he didn't purr at all!
Caspurr spent the entire evening under the bed, right in the corner, and wouldn't come out at all till everyone had left. And I had already found myself a cosy spot on the highest shelf in the wardrobe, from which I refused to budge. 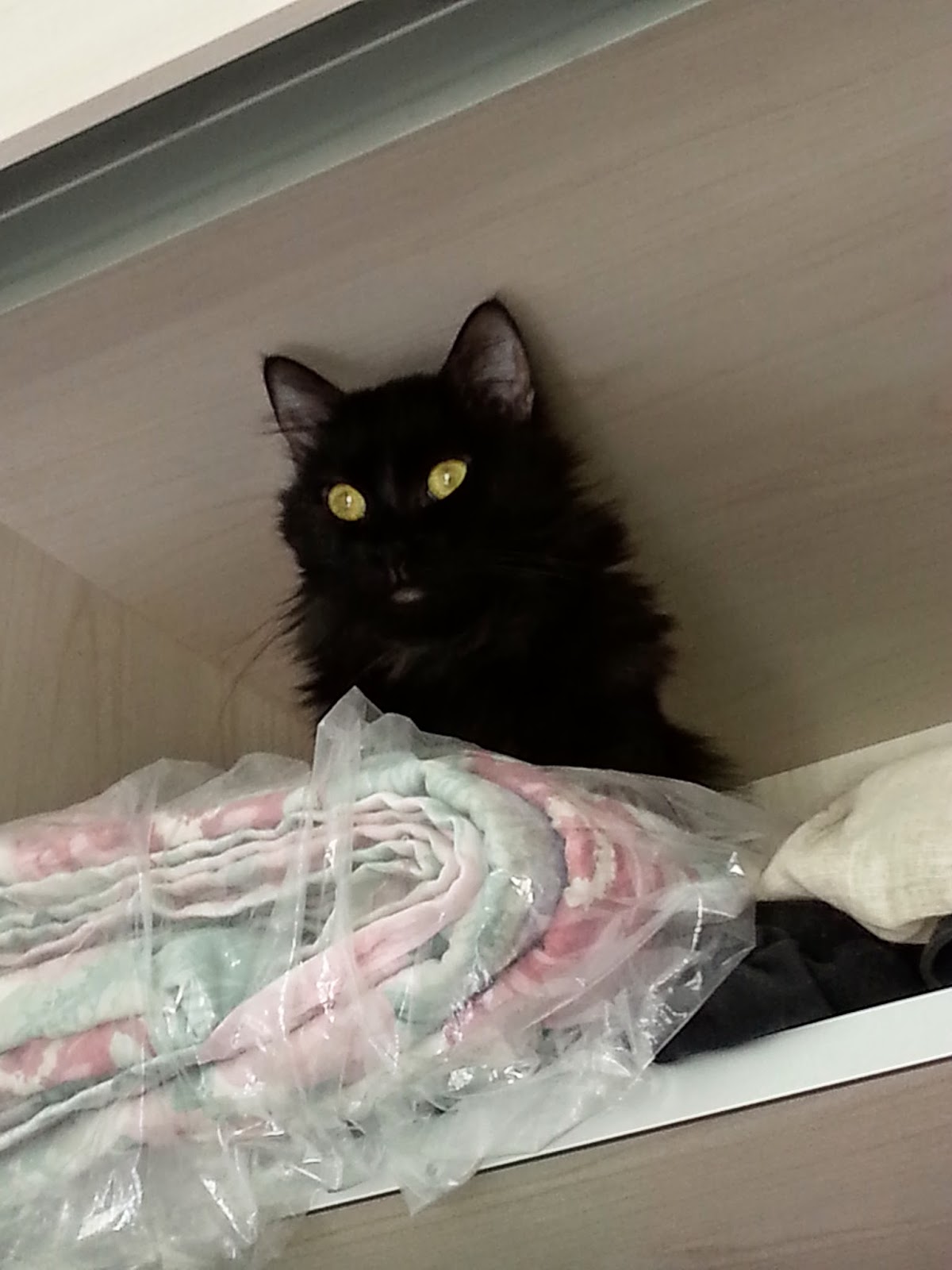 I tell you, kitties, if that's "entertainment", you can keep it! We prefurr Peace and Quiet. We do not like havoc and noise and so on - unless it's of Our Own Making, of course (mol). We like to have Our furriends round to visit and We love throwing Our own pawties.

In case Mummy doesn't find the time to help Us blog again before January 1st, We would like to wish all our anipals A Happy New Year.

Mummy has the Sads today, because it is exactly three years since Precious Pixie flew away to the Bridge.

Mummy says it's furry impawtant that We Three should know about the wonderful kitties who came before Us, so We can uphold their Legacy.

We do this by looking at pictures of the Departed Kitties and listening to Mummy telling Us stories about Them.

This is Pixie when She was a furry little kitty: 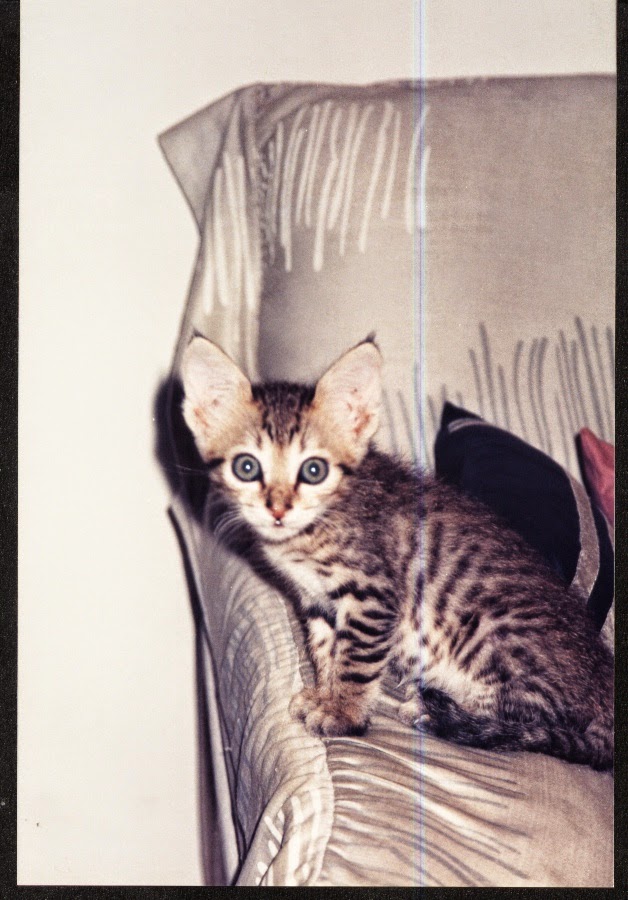 As She grew up, She became a Most Noble Feline.

See what an aristocratic profile She had: 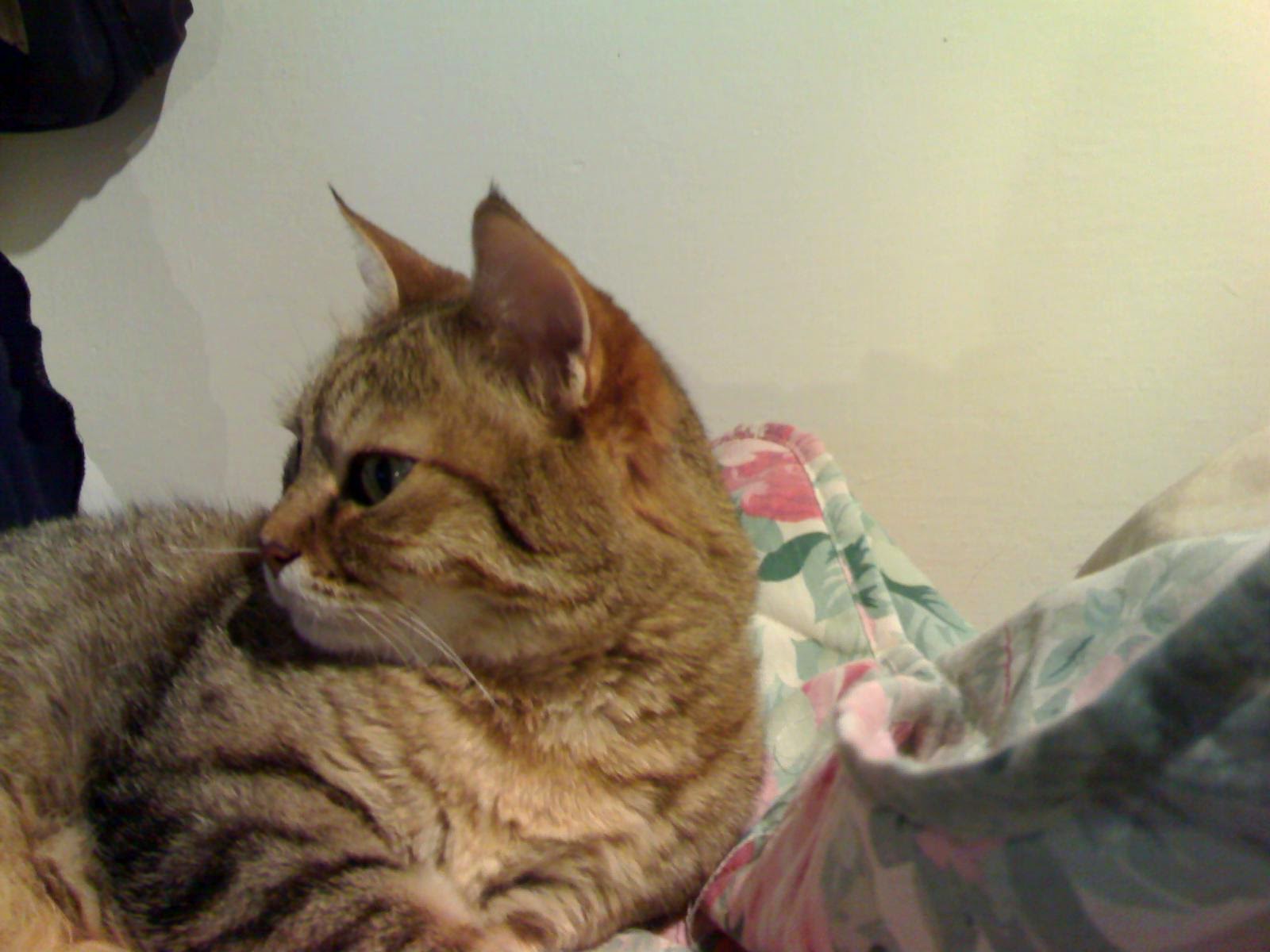 Of course, even though She was always Elegant and Ladylike, She still loved to run about and play, but She was generally a quiet, well-behaved Pussycat. She even used to let Mummy dress Her up for Purim. 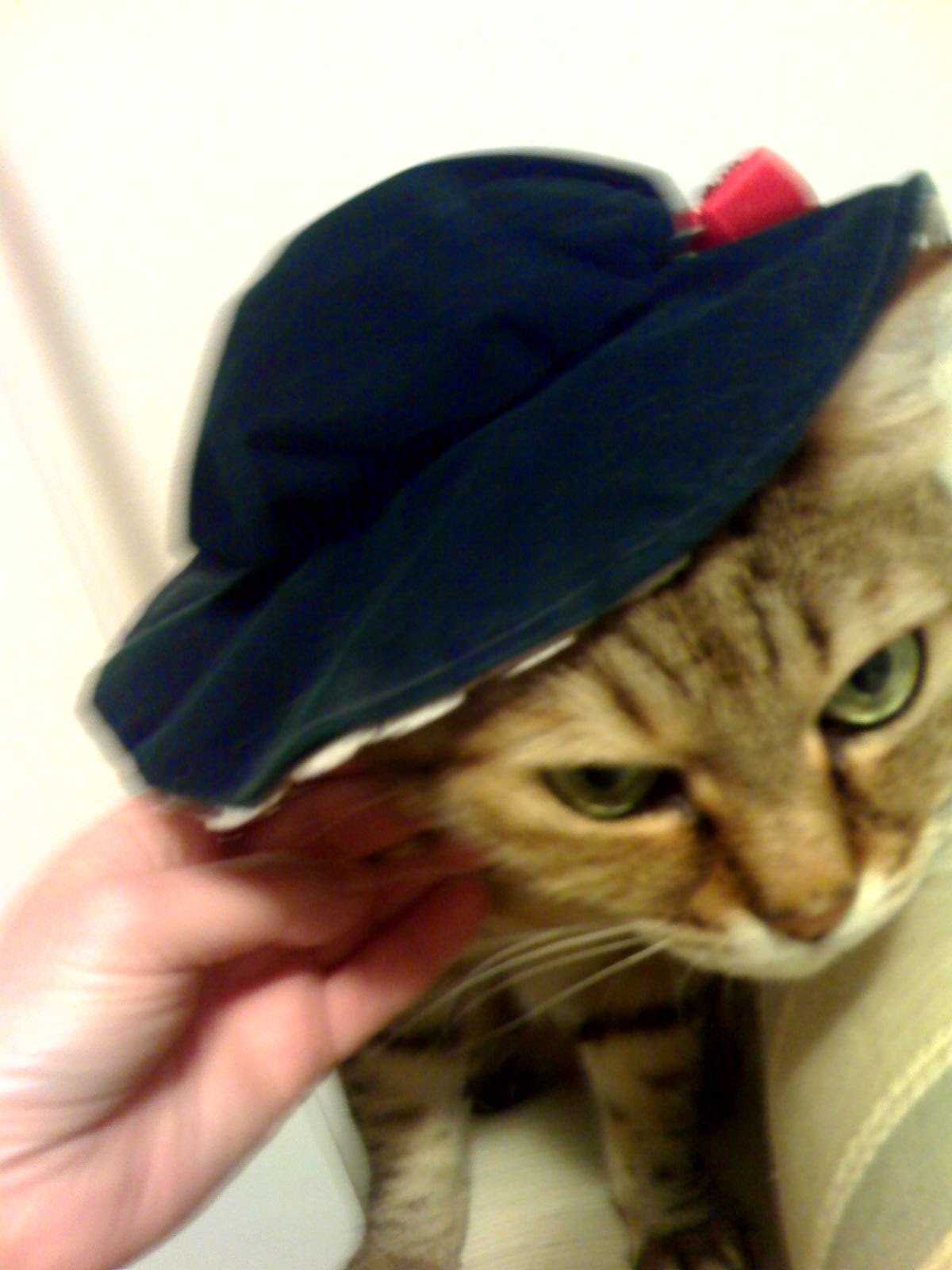 And She hated it when Mummy went out. She used to look so wistful that Mummy often wondered if She shouldn't stay home with her furbabies. But in those days, Mummy had to go to work effurry day... 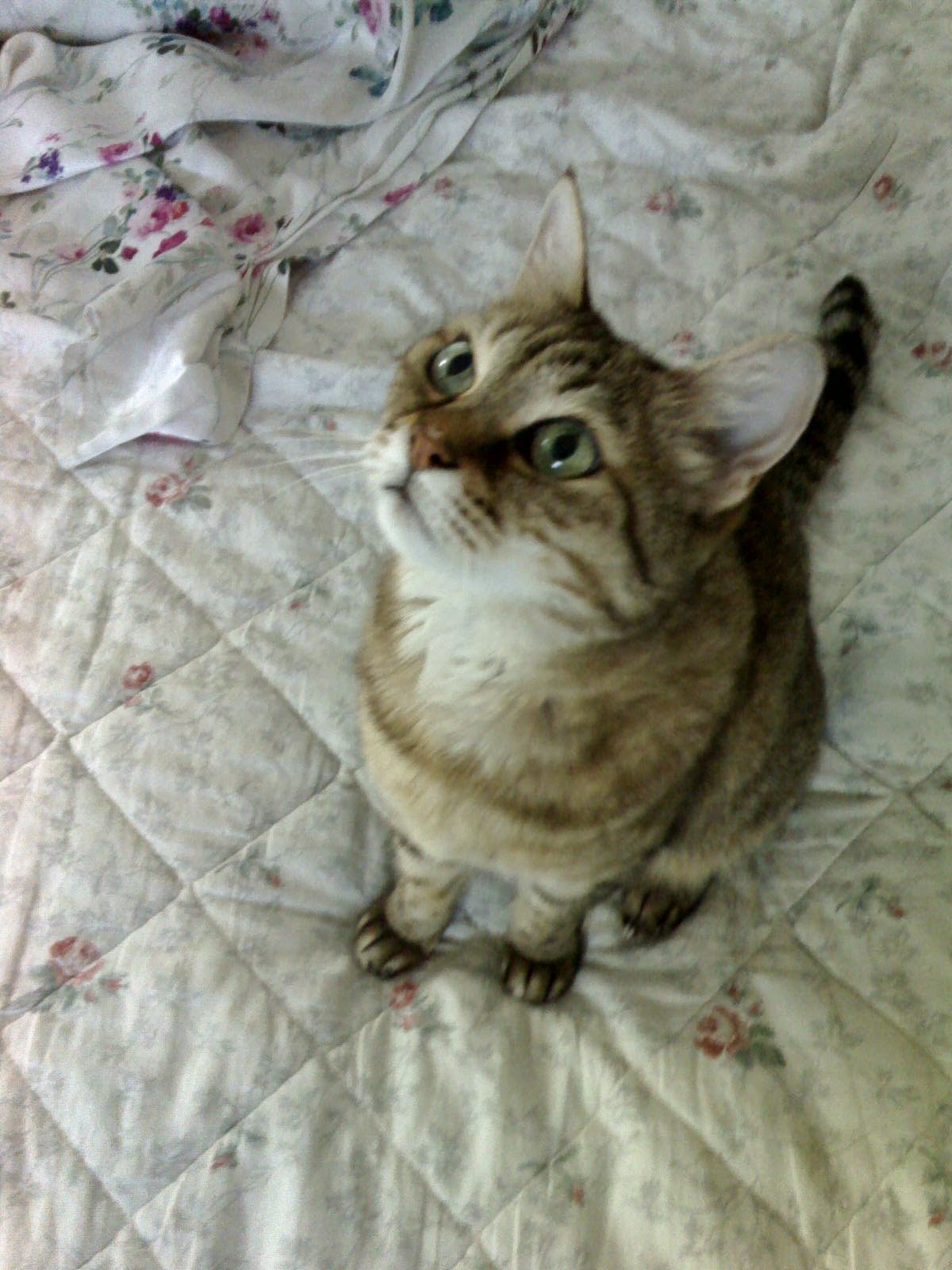 When that happened, Pixie used to curl up and go to sleep in Mummy's Her Bed, until Mummy came home. Here, you can see Possum as well. It's not clear whether He was watching over Pixie here, or waiting to pounce on Her... 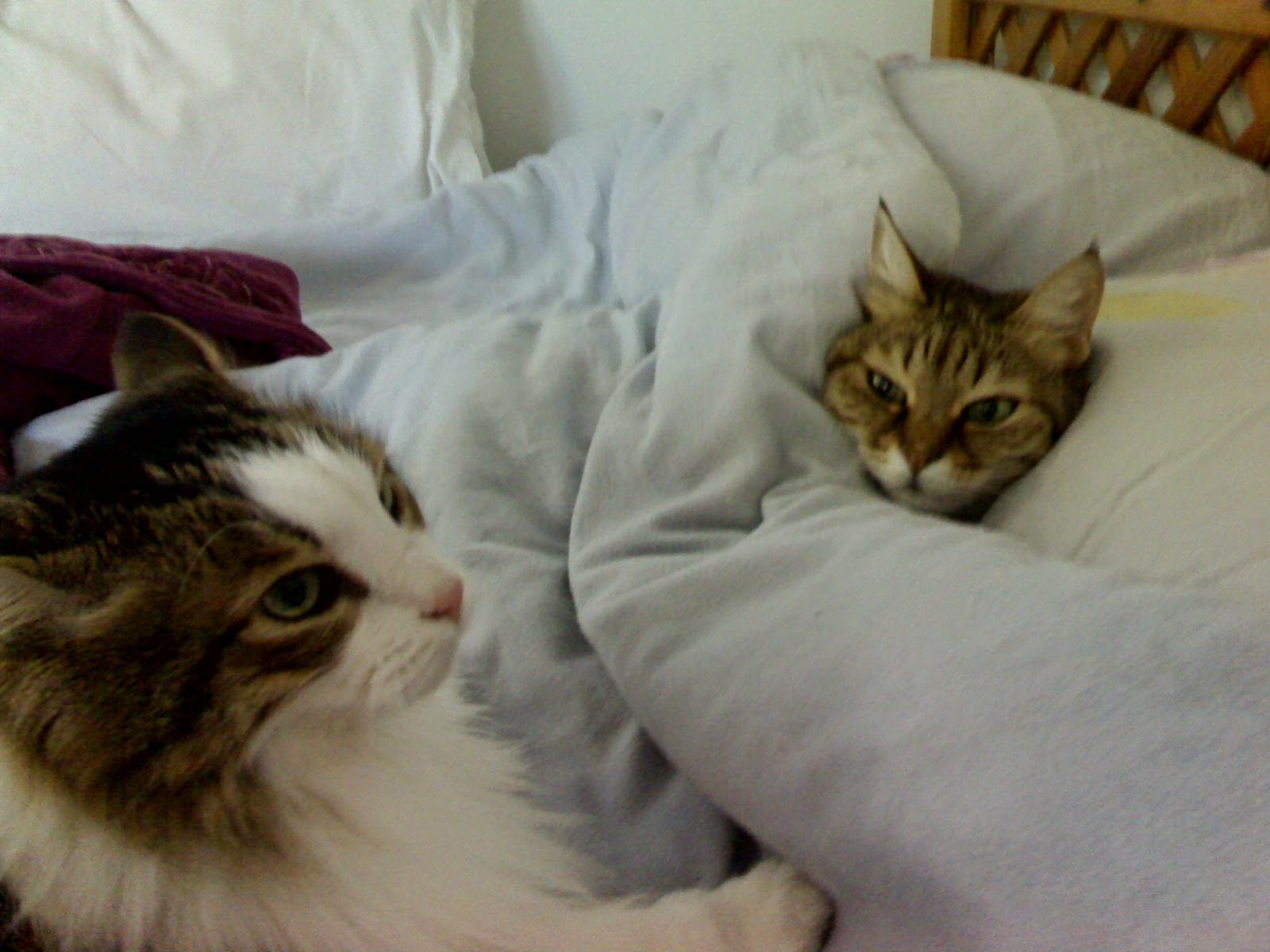 Now Pixie is an Angel, playing with Possum and all her other Fur-riends who have gone before, waiting for Mummy at the Bridge, and watching over all of Us: 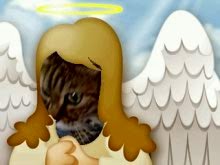 She must miss Mummy, furry much - as much as Mummy misses Her - but She is in the Care of the Great Cat in the Sky now, who will keep Her safe until it is time for Her and Mummy to meet again.