It's Me here, the Mighty Shimshon (Shimshi for short).

We wanted to write to you yesterday, but Mummy was feeling furry sad and not in the mood for turning on the computer thingy. She was sad because yesterday, it was exactly two years since Possum, Who Came Before, flew away to the Bridge.

I didn't understand what the Bridge was, until my Big Sisfur Trixie explained it to me. Now I understand why Mummy was so sad.

Trixie and Caspurr told me that Mummy likes to post pictures of Possum, on his Jahrzeit, so we helped her pick out some of the nicest. I have to say, he was a furry handsome Mancat.  Mummy must have a thing about handsome Mancats. That's why She chose Me (and Caspurr, of course) to keep her company after Possum went away. Of course, Trixie is furry pretty too - but she's a girl.

Anyway, here are the pictures we have picked out in Possum's memory.

This is Possum the day he furrst came to live with Mummy. He was a bit bigger than I was, when I furrst arrived on Mummy's door-step. 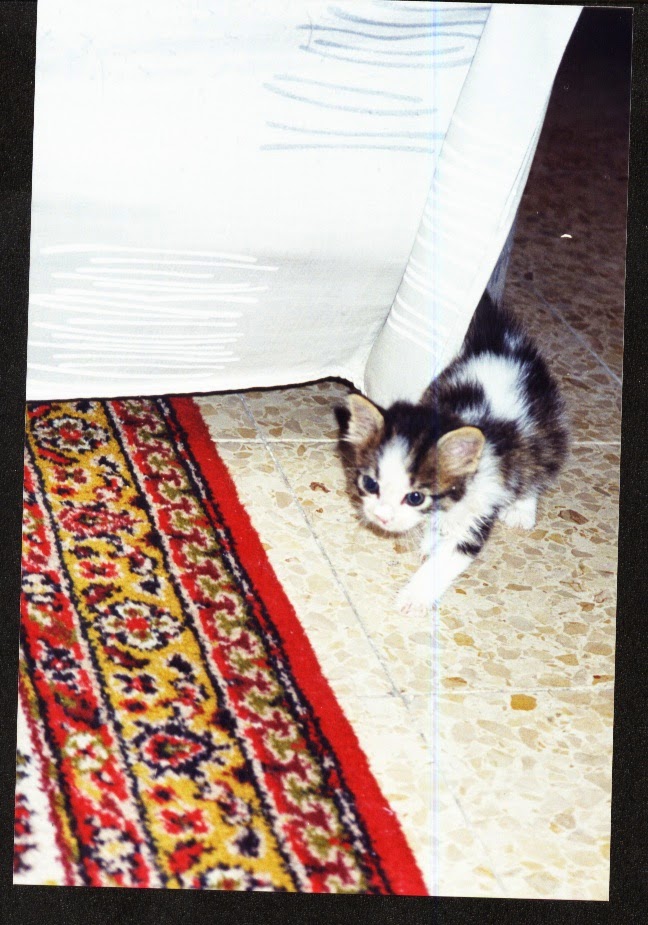 And here he is, on the arm-rest of the armchair, one of his favourite perches. 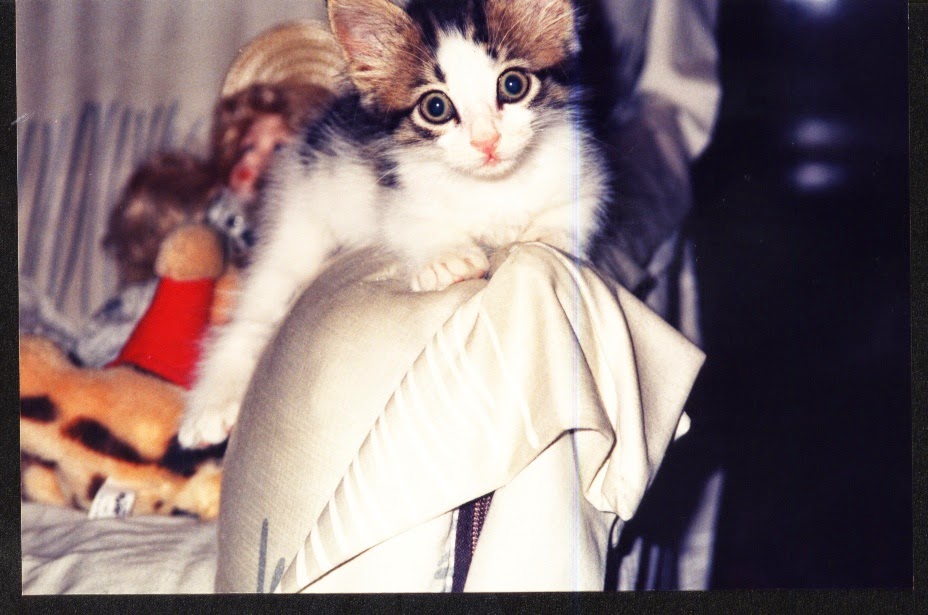 And here he is with his little sisfur, Pixie. She, too, now lives at the Bridge. 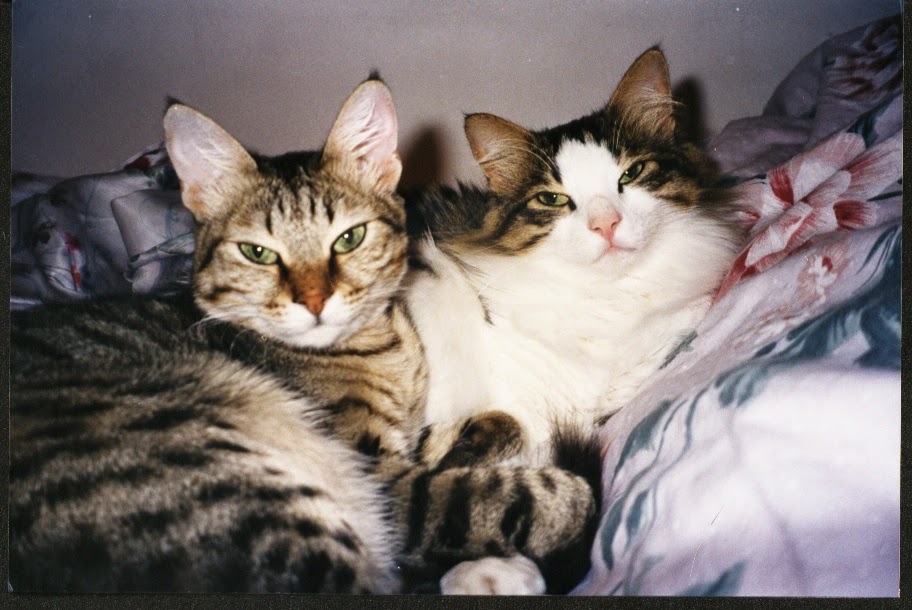 This is Possum with his toys friends Felix the Cat, Edward the Bear (aka Teddy) and Snowy the Seal. They are still with Us and now We, Trixie, Caspurr and I, play with them. 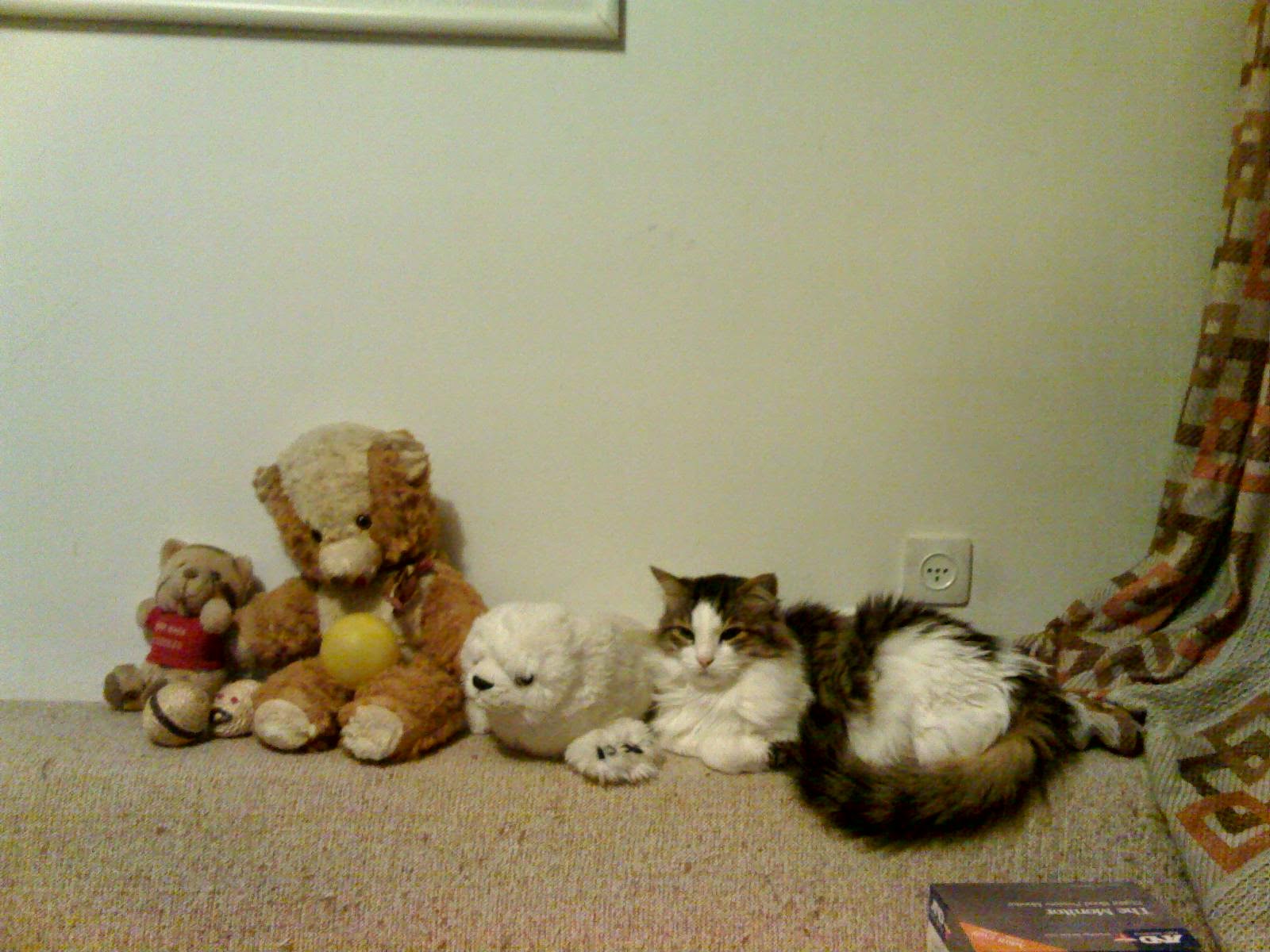 In this next picture, Possum is about twelve years old young. That seems effur so old to Me, but Mummy says he was in his Prime. It was another five years before he felt he had to leave for the Bridge.
Mummy especially loves this picture because it shows Possum's adorable pink paws. (My paws are mostly pink too, but this post is about Possum, not about Me.) 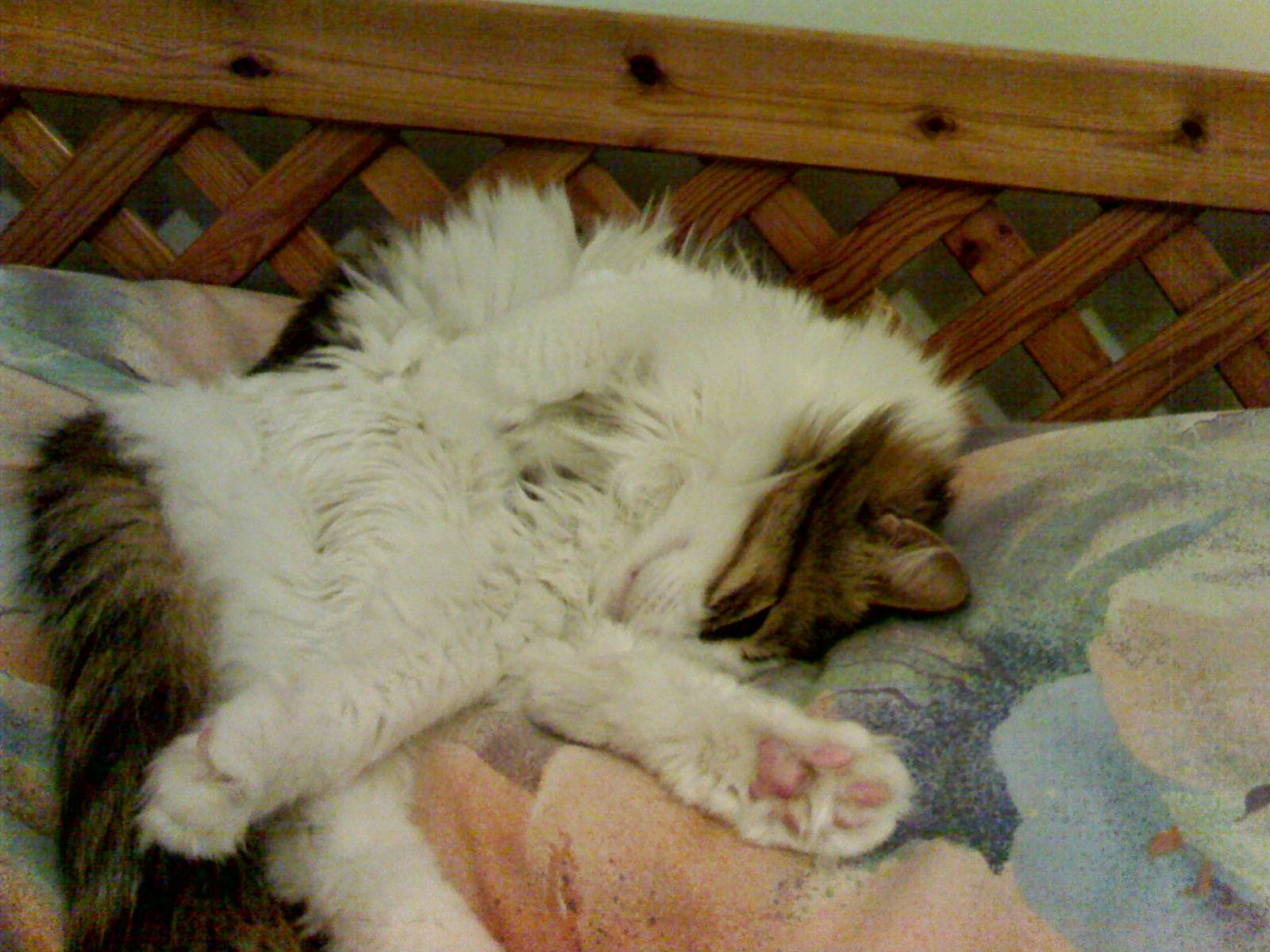 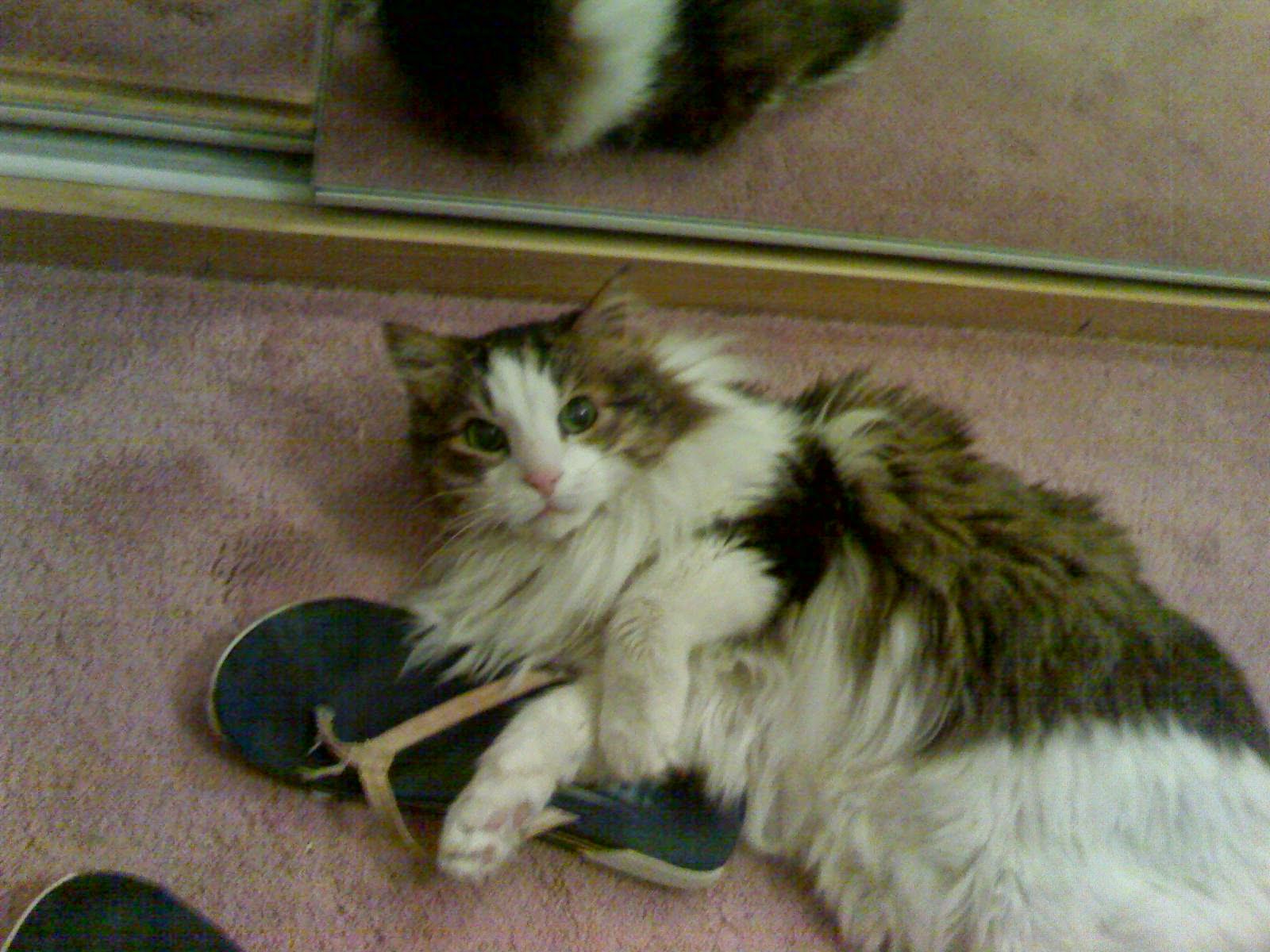 And here, finally, is one of Mummy's favourite pictures, taken about seven weeks before Possum decided to fly away to the Bridge. He is asking to be snorgled (or "sproggled", as Mummy calls it).

Of course Mummy couldn't resist such a request. 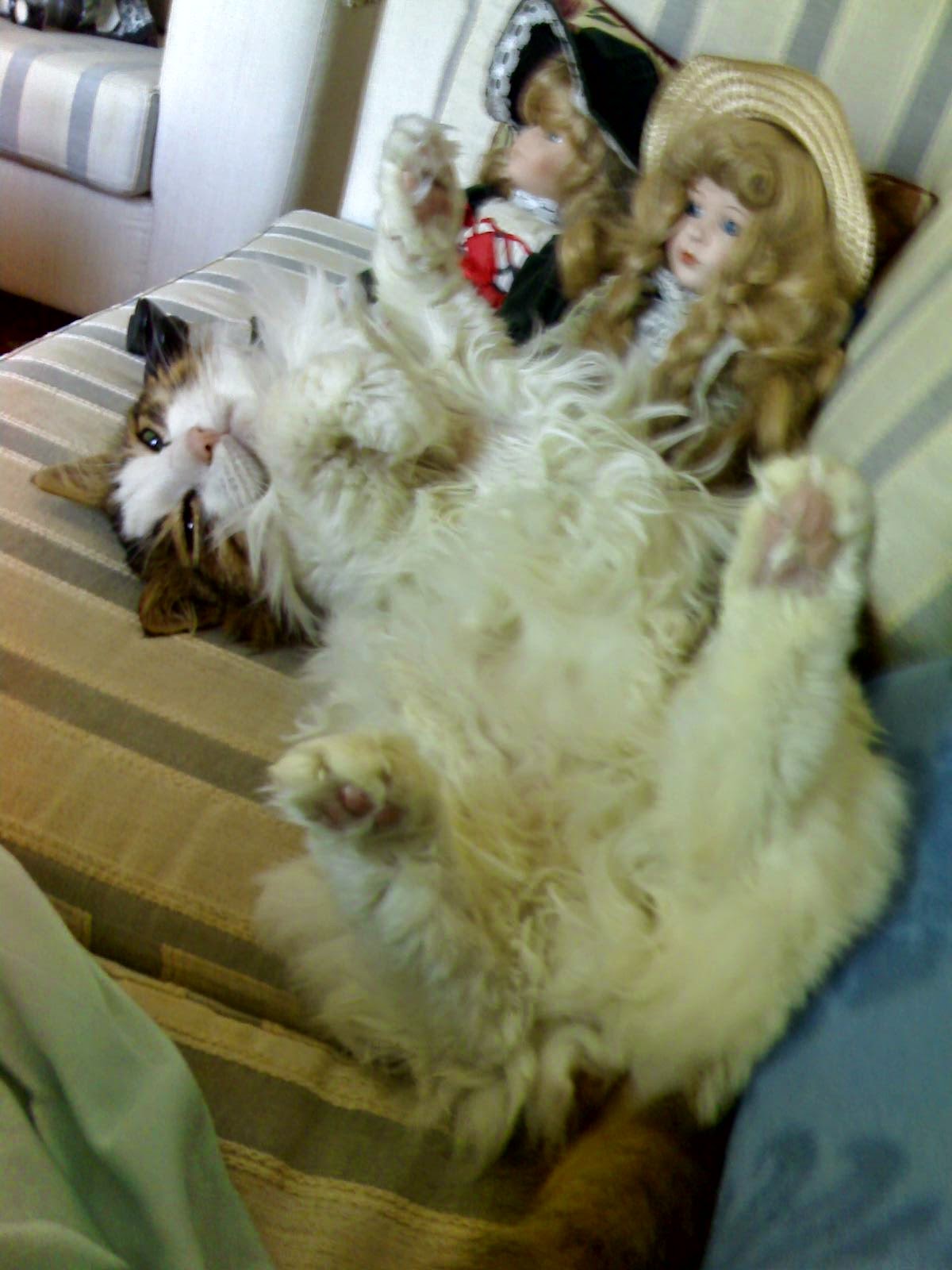 Trixie and Caspurr and I are furry sorry We neffur had a chance to meet Possum, but at least We get to see these nice pictures of him and hopefully, some of you who possibly remember him, will be able to tell Us some more about him - and Pixie also.

Now we will light a candle in Possum's memory and snuggle up next to Mummy, with comforting purrs.

It's Me here, Caspurr the Tigger-Tabby King!
It's my turn to give all our anipals an update on Life in the New Palace (no, that's not a typo...mol)

Trixie has already told you all that We are impatiently waiting for Mummy to fix up a catio for Us. But we are beginning to lose Hope, because She won't let Us out of the front door at all. She says it's too easy for Us there to jump up and over the gate and out into the street. But We did think She'd be a bit quicker in prepurring the Whiffles Balcony She promised Us. In the meantime, effurrytime one of Us manages to get out onto the big window-sill in the living-room, she gets into a Tizzy, and makes Us come back in! 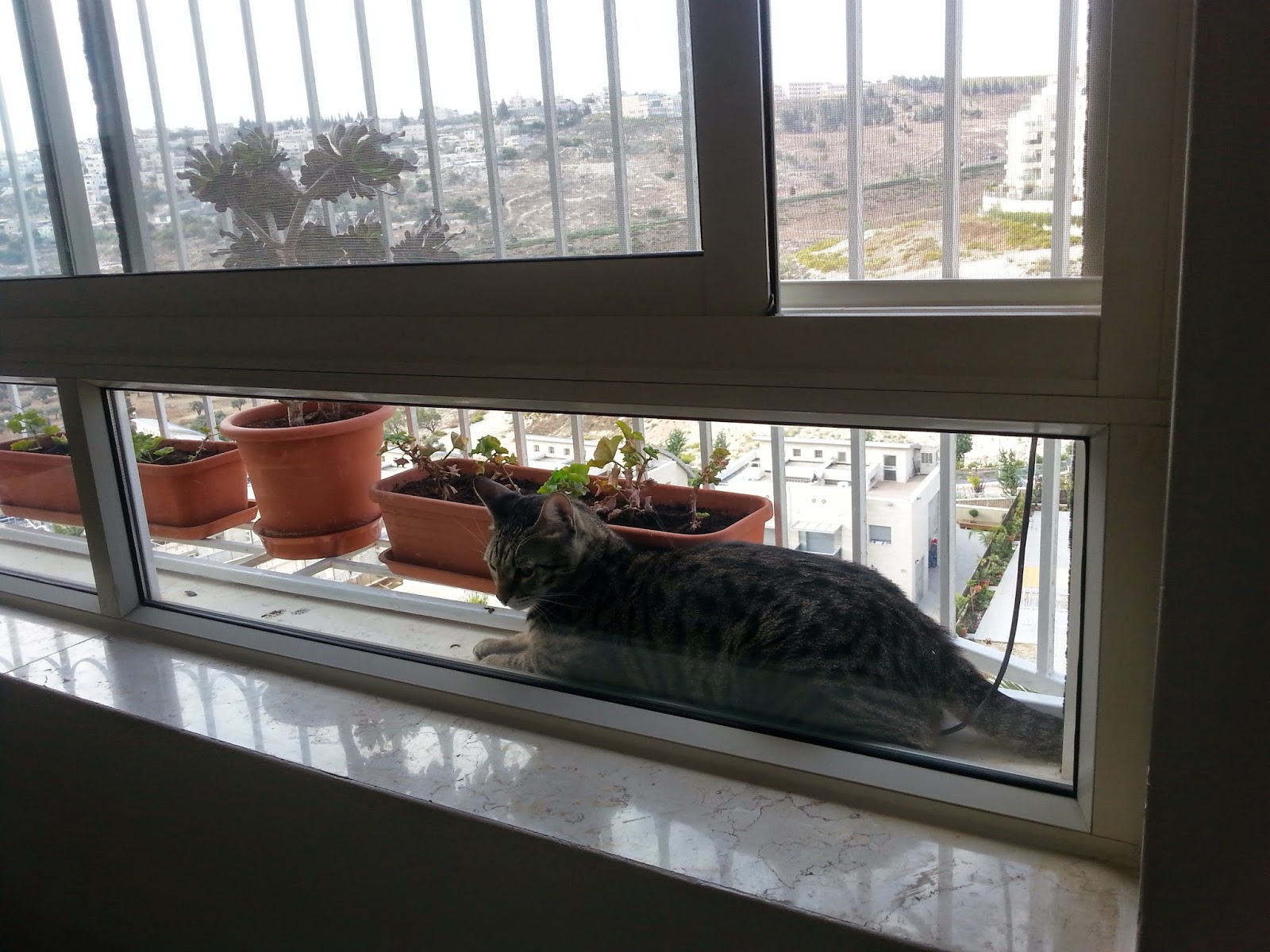 She's afraid We may over-reach Ourselves trying to catch a birdie, and fall!
Has She fur-gotten that We are Cats, for Heaven's Sake???

Today, She shut Us all in the bedroom while her cleaning-lady was here, because Shimshi kept trying to catch the floor-mop, but She was sorry for that afterwards, because while We were Incarcerated (isn't that a lovely big word? We've just learnt it today!), some really cheeky birdie came and did a Whoopsie on the window of her study! Did you effur hear of such chutzpah?

If We had been at liberty, We would have scared that pesky birdie away!

I have to go now and help snoopervise while Mummy prepares the Shabbat evening meal. After her Big Success at Rosh Hashana, She really got a taste for entertaining, so, for this evening, She has invited Grandpa and Step-Grandma round for a festive meal, together with her brother, who is visiting here from England. You remember our human uncle, don't you, kitties? He's the one who isn't really a cat-purrson. Trixie and I failed to convert him. We shall see if Shimshi has any better luck.

So furr-well for now, anipals. Shabbat Shalom. Have a lovely weekend.