Greetings, Fellow Felines (and C-A-N-I-N-E-S and Humans too)!

It's been a very sad weekend for My Human and Me. Her cousin Avi, whom we wrote about the week before last, crossed the Rainbow Bridge. I, purr-sonally, didn't really know Avi very well, but when Mummy is sad, it makes Me sad also. Besides which, it's up to Me to comfort Mummy. That's part of the job description for us Furbabies. I do know that when Avi crossed the Bridge, he found a little, four-legged friend waiting for him, his woofie-pal, Sheba, who left for the Bridge a few months earlier. She must have been very happy to see him again so soon - but it made Mummy so very, very unhappy. I hate it when Mummy's eyes start leaking. I don't always know what to do to make that stop. I shall go and snuggle up with her. She likes that. I can always get a smile that way - even if, as now, it's a very small, sad smile...

Mummy would like to ask all of you - and your Human Mummies and Daddies - to please purr-ay very hard tonight for her (human) cousin Avi who is very, very sick. He has something badly wrong with his blood and the chemotherapy has now damaged his kidneys also, and if a miracle doesn't happen, he may have to leave for the Rainbow Bridge. She has written about this on her own blog.
So please, everybody, remember Avraham ben Dvorah in your purrs and prayers tonight.

Greetings, Fellow Felines (and C-A-N-I-N-E-S and Humans too)!

It's still ever so hot, I have no energy for anything, but I make an effort now and then because I know my Human gets Really, Really Worried when I just flop down and don't move for hours. To tell the truth, Kitties, it is often an effort just to get up or, if I'm already up, to sit down. I'm waiting for her now, to come and take her Shabbat afternoon nap and then I can feel comfortable, knowing she is safely snuggled up beside me.

She gave me some extra culinary treats today. She let me lick out the last of the goats' milk cream cheese in the tub and just now, she let me lick out her dessert bowl. She said it was something called "ice cream"  and to hear her, you would have thought it was something really special. But I didn't care for it much, so I left it after only about three licks and demanded some proper food. That means Fancy Feasties, Fellow Felines (et al.) and this time, it was Tender Liver and Chicken - one of my favourites.

The Paparazzi have been very busy this past week, so Mummy and I had quite a hard time deciding which was the best picture of Moi to show you, but we eventually chose this one, because, as Mummy was quick to point out, it displays my beautiful pink and white toesies to best advantage. 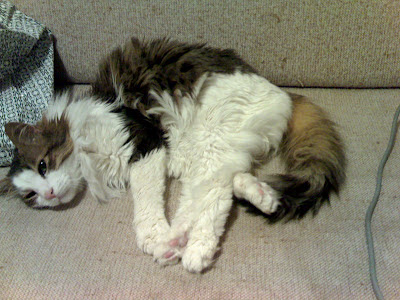 I see Mummy is ready, at last, to take her nap, so I shall go and lie down next to her, so as to guard her and keep her safe from any possible Intruders. Have a lovely weekend, Fellow Felines (etc)!
But before I go, Mummy would like to invite your Human Mummies and Daddies to take a look at her own blog. She worked very hard on it and she thinks they would like it.

We had a nasty surprise the other evening.  My Human was reading in bed, quietly minding her own business, when I heard a slight click. Instantly on the alert, I bounded down from the bed and took up my position in the hall, before the front door. And then I saw it - a great, big, ugly, brown
c-o-c-k-r-o-a-c-h scuttling out of the kitchen, across the hall and into the bedroom. Mummy looked up, saw it racing across the floor and started screaming. I know I should have deaded it, but, kitties - it was too quick for me. I'm not as young as I used to be and I can't run so fast now. However, My Human proved herself to be a Highly Efficient Assassin. That horrible Creepy Crawly ran under the bed - but then it turned and ran right out again and Mummy was ready and waiting for it with her shoe and she hit it and hit it, over and over again, till it was deaded and squashed into Mummy's nice, pink bedroom carpet. That was when She finally stopped screaming and said the "S" word (several times, in fact - MOL),  because it's not easy to clean bits of squashed roach out of a thick pile carpet!
That's the trouble with Humans - they have no patience. If Mummy had waited a minute, I would have arrived and pounced on it as it emerged from under the bed and I would have deaded it quickly and cleanly. As it was - Mummy had to get up and start trying to clean the carpet. And then she got out a big yellow spray can and sprayed evil-smelling gas all over the house, and that meant she had to move my food and water out of their usual place, so as not to poison me.  I hate it when things aren't where they're supposed to be!
So you see, Fellow Felines (et al.), it's been quite an exhausting week and I am very glad that it's Friday and tomorrow is Shabbat and Mummy will be home with me all day, and we can rest from our labours. 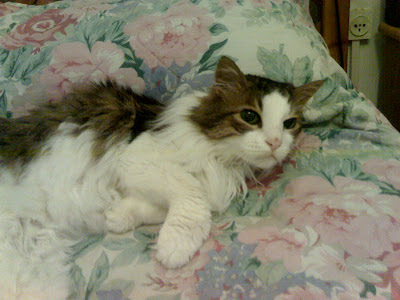 Shabbat Shalom to you all :-)