Chrissymouse Greetings from the J-Cats: Caturday Art and Sunday Selfies

Here in Jerusalem, We J-Cats are enjoying sunny, but furry cold, weather. That is expected to end tomorrow, when Winter Storm Carmel brings wind, rain and pawsibly even snow to the north and centre of the country. If you look at a map, you can see that Jerusalem is more or less in the centre of Israel, although in the past, it was officially part of what was named "the Southern District". At any rate, the Weather Prophet on Mummy's meowbile phone says We are in for it tomorrow. We hope the thunder boomies won't be too loud, but if they are, we shall burrow under the blankies on the bed and try to purrsuade Mummy to come and snuggle there with Us.

Strictly speaking, it is Trixie's turn to repurresent Us in this week's blog hops, but as many of you are celebrating Chrissymouse at the weekend, and We all wanted to send you Greetings for the Holiday Season, We decided that this time, all three of Us would share Our Sunday Selfies with you and then turn them into Chrissymouse Art.

So, without further ado, here are Our Selfies. 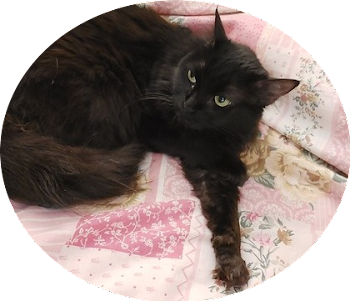 And here she is, all artified and dressed up for Chrissymouse: 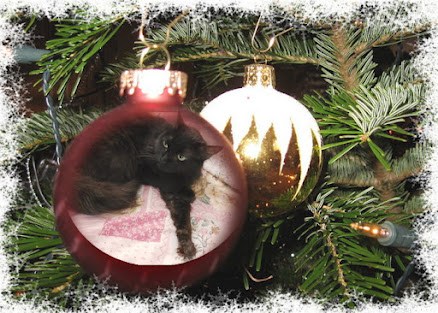 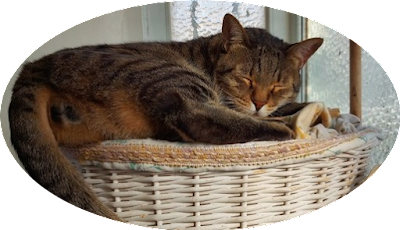 And here he is in Chrissymouse Tree Decoration Mode: 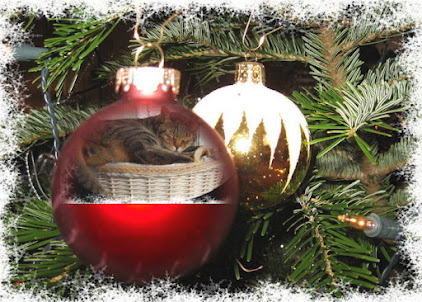 And last - but by no means least - Shimshi, as Large as Life and Twice As Natural (Just kidding. He's a lot bigger than this). 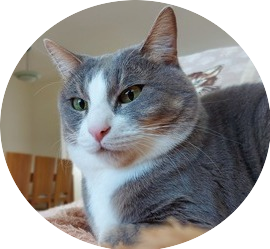 And here he is as a Chrissymouse Bulb: 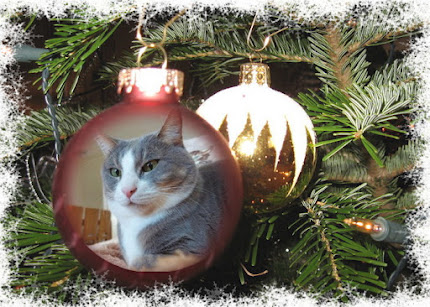 And here are the Blog Hop Badges:

This coming Fursday, December 23rd, is the 10th anniversary of the Departure of Princess PixiCato aka Pixie, for the Rainbow Bridge. We shall devote next week's bloggie to her, as She deserves a post all to herself. We shall recall tales of Her, and learn all about Her Legacy - which includes this Bloggie, which Pixie co-founded.

Until then, take care of Yourselves and your Humans, and beware of the Devious, Sneaky, Evil Coronavirus, which keeps changing form and disguising itself.
Have a Meowy Chrissymouse.
Be well. Be safe. We love you all.
Posted by The J-Cats at 1:19 PM

We would love to hang each of these lovely ornaments on our holiday tree! Happy, Merry Christmas to one and all ...
June and Ann

You made such lovely and beautiful ornaments, sweet friends. We love them! Stay warm and safe, okay?

You all did lovely selfies, and the pretty Christmas ornaments are lovely. Merry Christmas to all of you.

Love you on the decorations!!!

I so remember your two babies. It's amazing to think Trixie has been gone away that long.

All of the ornaments are especially beautiful because you are each on them.

All my love dear ones.

Katie Isabella
PS we are so sorry to be missing so much. Things are different right now because of illness in the family. XX

Hope the weather isn't too bad! Love the photos and Chrissymouse decorations :)

Y'all really do look ornamentally wonderful!!!

You all look great, and I love the art. XO

Your art work baubles look fit to dress the most regal of trees. Hopefully that nasty weather passes by quickly!
Purrs to you all
ERin

That's so sweet of you all to include Christmas wishes for those who celebrate. Your ornament art is lovely!

Take care and have a good week; stay well and stay safe.

What great selfies and beautiful ornaments! Thank you for the Christmas wishes!

Your selfies and selfie-ornaments are very decorative and lovely to behold!

We are late, but wanted to say the pics were GREAT!

We decorated a Solstice Tree this year. With toy mousies in it... MOL!

Nice to meet you all. Beautiful selfies, of course, of cute cats.
Jerusalem and snow, a long time ago I was in a kibbutz working in children's house, age about 5. One morning the house was empty, only a small piece of paper was there. I was terrified what has happened. So reading the paper, it was snowing in Jerusalem and the children were on their way to see, for the first time, snow.I never forget that morning.
Sorry, I am talking too much.
Happy Holidays to you!
photofinlandrantasalot.wordpress.com