Mummy was so impressed by my Nobility and Generosity last week, sharing My Post with My Brofurs, that She agreed it would be appropriate and fitting for Me to lead the J-Cats again this week, on the Caturday Art Blog Hop (hosted by the Wise and Beauteous Athena and her HuMum, Marie) and the Sunday Selfies Blog Hop (hosted by the Effervescently Unpredictable Kitties Blue and their HuMom, Janet).

So here I am, enjoying an autumn sun puddle on My Royal Couch, by the living-room window: 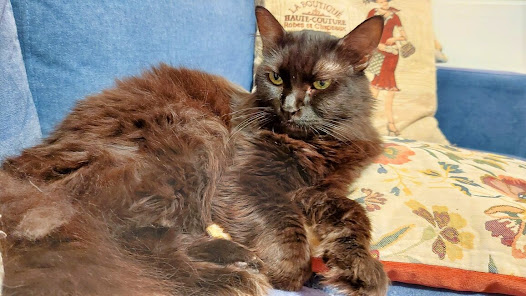 You can't actually see the sun puddle, but I think you can discern the subtle effect of the sunlight on my normally jet-black furs.

Since this is my second week in a row, I have decided to give you, as a Bonus, another Twofur of the Pesky Mancats My Brofurs, before showing you the artified version of My Selfie: 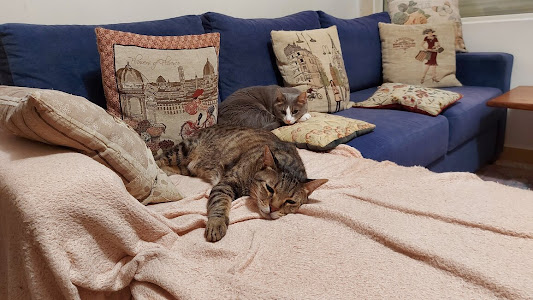 And now, back to Business.
For my Caturday Art, We used LunaPic's Coffee Effect at 85%, that beverage being such an impawtant part of Mummy's daily routine (mol) - though to be completely honest, since she caught the Evil Coronavirus, She has been drinking a lot more Tea, which She credits with having played a major role in her recovery! 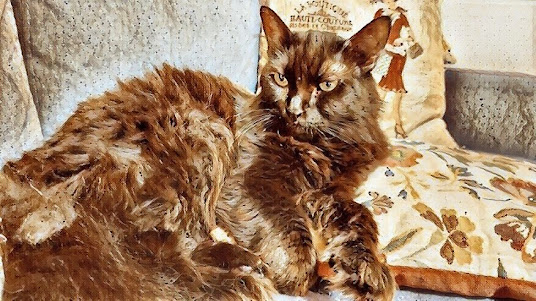 We then overlaid that with the Stained Glass filter at 45% and placed the whole in an elegant frame, thus: 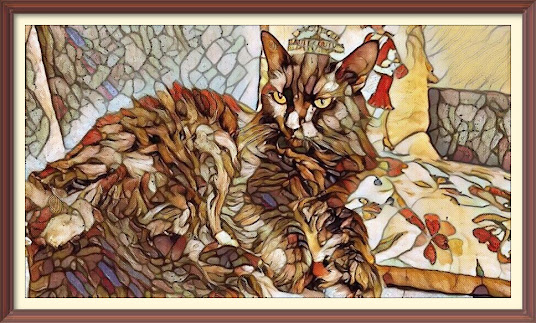 And now to other News.
Mummy has an Exciting New Mewsical Project in hand. Together with seven other members of her Caterwauling Club, She has formed a Women's Ensemble which has been named Alma.  That is a word-play. In Hebrew, Alma (עלמה) means a young woman (wishful thinking, Mummy? - mol), but by changing one letter (עלמא), it is also the Aramaic word for the World, and since the repertoire includes Mewsic from all over the World, it is a furry suitable name.  They spell it the second way.  Anyway, tomorrow, they will be appearing for the furrst time, at a retirement home quite near to where We live, in a concert which includes songs from ten countries in almost as many languages. So let us put Our Paws together, and wish Mummy and her Caterwauling Companions, effurry success in their Endeavour.  I expect She will be delivering a full report of the concert on her own bloggie, later in the week.
Before We forget, here are the Blog Hop badges:

And finally, We leave you for another week, with the reminder that the Evil Coronavirus still stalks the Earth, so make sure your Humans continue to exercise the Greatest Pawssible Caution - and you Kitties, keep washing those Paws!

You do look totally fabulous and quite regal Queen Trixie! That's super cool about your Mom's concert, I'm sure she will have a fun time!

I say, that is very good of your staff to offer their singing services. I am sure they will be very well received and thanked for their talents and time. Maybe youcould accompany them and have a solo piece to perform?
Anyways, I think the stain glass image is the nicest of the two, though to be fair it is a tough choice when the original is a masterpiece already.
Purrs
ERin

Oh I absolutely do wish your Mummy and her friends great success in the Caterwauling Club! I'd love to hear them again! (via video)

Trixie, that is such a beautiful selfie, befitting of your stature as Queen! And how nice of you to show your Brofurs, too. :)

That is great news about Mummy's performance at the nursing home. So exciting, and we hope it goes well.

You are a beautiful work of art Trixie. Best to your Mom on her singing group, can't wait to hear how it goes.

Your artwork is lovely, Trixie. And good luck to your mom and the rest of the club. I hope the concert is a huge success. ~Ernie

That is a lovely selfie on your royal couch. The art is lovely too. That is exciting news for your mum and her friends.

Oh Queen Trixie you are so very good looking there is no need for art but you did and Me-Wow how beautiful. Very nice selfie of the bro-furs and did you know you won with Marv over at Cats-astropic Events. Now which of you is going to get the picture Hmmmm

Firstly, concats on your win at Marv's blog!!

Love that art work, that looks like a mosaic, as well as a stained glass. I had a friend who years ago did that kind of glass work as a hobby.

Nice to see your brofurs as well!

Petcretary works in a nursing home, and she misses the groups that would come in to give their little concerts/recitals for the residents. They loved that kind of thing, but for the past eons of time, we have not had any of this happening.
Glad you are able to make a bright spot in the residents of where you are going, know ahead of time that it will be loved and appreciated!

Such beautiful photos and your art is divine!

Beautiful selfie and art. And your brothers are pretty cute too. How exciting about your mum's singing group. I am sure they will sing beautifully. XO

Such nice arat. Best of luck to the new catawauling group.