Hallo again, Effurrybuddies!
Today, for Our Caturday Art and Sunday Selfies, We are featuring one of Mummy's Angel Kitties - Possum the MagnifiCat, who flew away to the Rainbow Bridge nine years ago come Thursday. On October 21st, We will commeowmorate his passing, and in his honour, Our Entries in this week's Caturday Art Blog Hop (hosted by the Wise and Beautiful Athena and her HuMum, Marie) and the Sunday Selfies Blog Hop (hosted by the Always Unpredictable Kitties Blue and their HuMom, Janet) will all be of that meowvellously floofy mancat, who, together with his sisfur Pixie, was one of the co-founders of this blog.

So furrst up, here is a picture of Possum when he was quite a young kitty. Mummy does not know exactly when the picture is from, because it was taken on one of those Ancient Cameras with film in that you had to take into a photography shop and have developed, and later, scanned into the computer. But it must be before 2006 because that is when Mummy got her furrst digital camera. 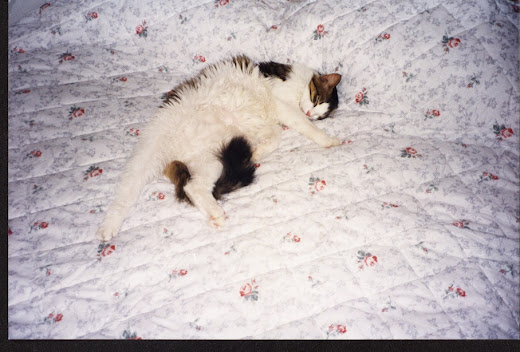 The next photo was taken on August 1st, 2008, on Mummy's second meowbile phone (and the furrst to include a camera) when Possum would have been about 13 years old: 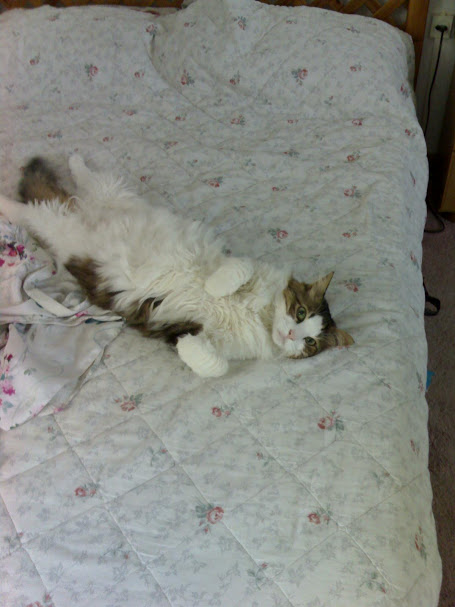 As you can see, Possum was a creature of habit. He had his Favourite Places to hang out, and the bed was one of them.  Nor does he appear to have aged one little bit between the two photos!
The last photo was taken on the same meowbile phone, and as it is dated November 8th, 2006, it must be one of the earliest digital photos Mummy took. At any rate, it came out a bit fuzzy: 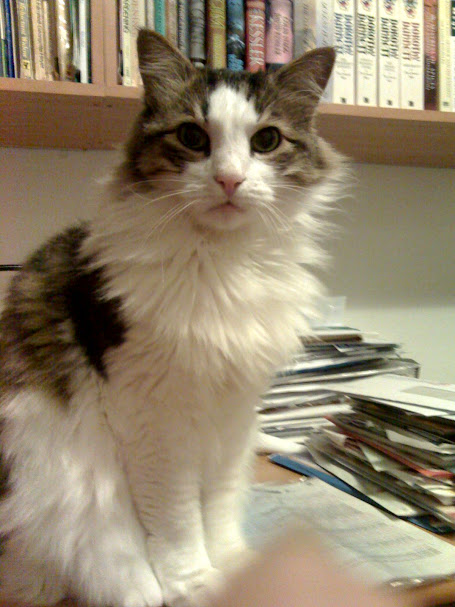 That being the case, We thought it would be the purrfect choice for artification, so off We went to LunaPic and added the Grey Art Effect at 65%, as well as an elegant frame: 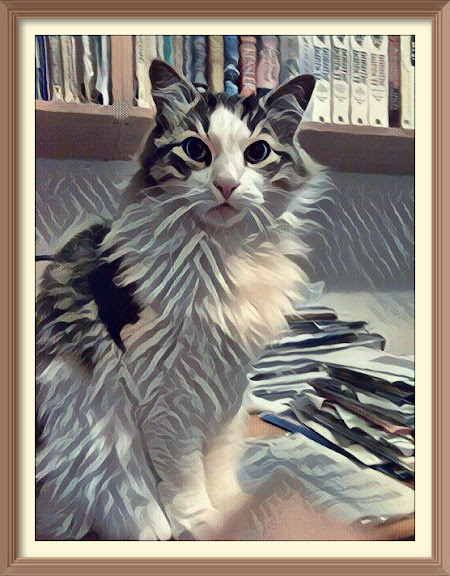 But We decided that even that was not enough to give due honour to Angel Possum, so We paid a visit to PhotoFunia, and THIS is the final result: Now Mummy's eye's have gone all leaky, remembering her sweet, floofy boy...
And, speaking of Angels - this past week, We were all shocked and grieved at the sudden loss of beautiful Giulietta of the Kitties Blue. We send Our Condolences to her pawrents. We are sure that Possum and his sisfur, Pixie, as well as Mummy's furrst kitty, Minxie, who went OTRB before Mummy effur had a blog or even a meowbile phone, would have been waiting to greet Giulietta and show her around and make her welcome.
Now, it is time to go blog-hopping and visiting all Our Furriends. Never put that off, because Life can be shorter than expected and you may find it is too late to tell them you love them.

So here are the blog hop badges:

And once again, We want to remind you all that the Evil Coronavirus is still here among us, and so you need to make sure that your Humans continue to take effurry precaution, even if they are vaccinated.

Aww, it was so nice seeing your sweet Angel Possum. Always loved, and neve forgotten. XO

Angel Possum is beautiful and the art is amazing. Definitely deserves to be up on a gallery wall!

Possum is a really handsome kitty and his Angel is skipping around the bridge so happy he is a Selfie too! Purrs friends and may that evil virus go go go away

Possum was one handsome man cat! We always LOVE seeing pictures of the befores. Sometimes Mom's memories roll out her eyes and down her cheeks too. You guys made a most magnificent pawtrait of Possum and we are so glad that you had it hung in a place where ALL can enjoy his gloriousness (and magnificent floof) We hop you all have a marvellously happy week!

Possum was a very handsome boy. I love the art you made with his photo. XO

Possum is fabulous, and his artified photo definitely belongs on a gallery wall. He looks very much like our mom and dad’s first kitty, Skooter; though Skooter had short fur. Thanks for mentioning our lovely Giulietta and for your condolences. I am certain her sister, Fiona, and many wonderful friends and other Kitties Blue were waiting for her with open paws. Thanks for hopping. XOCK, angel Lily Olivia, angel Mauricio, Misty May, Giulietta, angel Fiona, Astrid, Lisbeth, Calista Jo, Cooper Murphy, Sawyer & Kizmet

Such a dear Angel, I'll bet he was a really sweet one.

Possum was quite the handsome guy! Thanks for introducing us to him this week. Purrs to your mom.

What a beautiful boy!

Possum was absolutely darling! Purrs to you as you remember him.

Gawjus kitty. We're sending hugs. We know all about those leaky eyed memories. Mommy does it a lot these days.

Awww, he was a gorgeous kitty.

How handsome was Possum!! He sure deserves that honorable place in the Art Gallery!

Possum the MagnifiCat was very handsome, and the art is lovely.

Angel Possum was an absolutely gorgeous kitty. And he is a lovely subject for artwork. *Gentle paw* for your Mom. It's sometimes bittersweet to remember those who have come before.