Greetings, Effurrybody!
Since this coming Tuesday evening sees the start of Yom Kippurrrrr, (the Day of Atonement), the Holiest Day in the Mewish calendar, all three of Us wanted to share Our Sunday Selfies with Our Furriends, to wish you all A Good Final Sealing (גמר חתימה טובה - G'mar Hatima Tova).


Furrst up, here is Trixie: 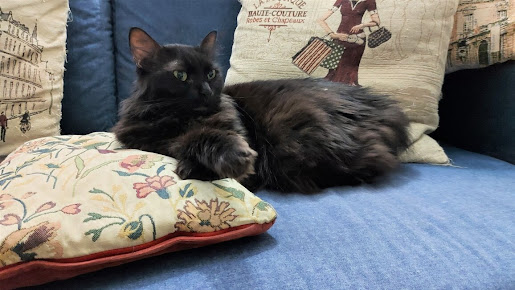 You can't see her magnificent, floofy tail, but don't worry. That's only because it is neatly tucked in behind her - or underneath her.
Next, here is Caspurr - true to Our Earnest Belief that Sunday Selfies is merely another way of saying Sunday Snoozies: 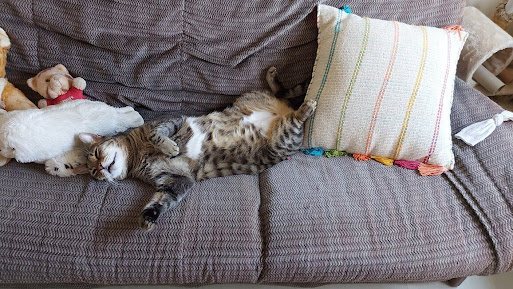 And last, but furry definitely not least, here is Shimshi: 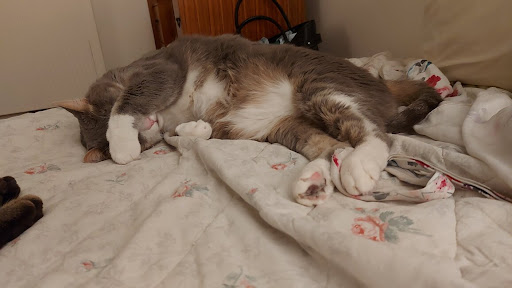 He also furrmly believes that Sundays (and Mondays, Tuesdays, Wednesdays, Thursdays, Fridays and Caturdays) are for snoozing (mol).
So how are We going to decide which of Us will be leading the J-Cats on this weekend's blog hops - the Caturday Art blog hop, hosted by the Wise and Beautiful Athena and her HuMum, Marie, and the Sunday Selfies blog hop, hosted by those delightful and Predictably Unpredictable Kitties Blue and their HuMom, Janet?
Well, We'll let you into a little secret.  This week, We are giving that honour to a guest - a little kitten who has seemingly adopted Step-Grandma and has taken up residence in her front yard. As you can imagine, Our Woofie Uncle Messi wasn't too happy about that, but he seems to have grown used to the idea (more or less). However, Step-Grandma can't let the little kitten into the house, because one of her grand-daughters has asthma and being in the same house with a kitty brings on a severe allergic attack. However, the little kitty, whom Step-Grandma has named Milo, is being well cared for. There is a small store-room off the courtyard, with a gate, where Step-Grandma keeps chairs, and she has made a little hidey-hole there for Milo. When it starts to get cold, she will put a blanket on one of the chairs and make a little nest for him. And she feeds him four times a day, so that he seems to have doubled in size (Step-Grandma says) over the past fortnight. Mummy filmed him and took some photos also and although She was afraid he might be lonely, so far, he seems to be purrfectly happy playing with large leaves and destroying Step-Grandma's potted plants (mol).
Here he is, Effurrybody. Meet Milo! 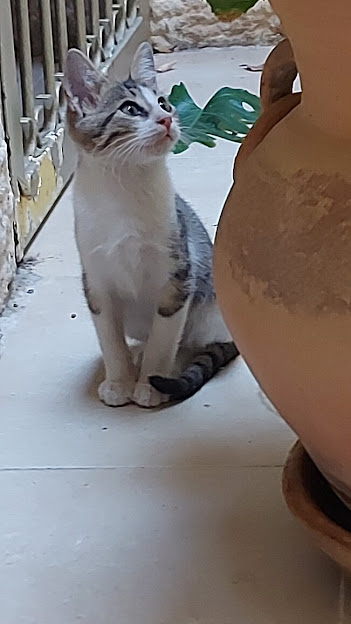 Step-Grandma thinks he looks rather like Shimshi. What do you think?


Anyway, Mummy took his picture over to LunaPic, and added the Surreal Painting Effect and one of their elegant frames: 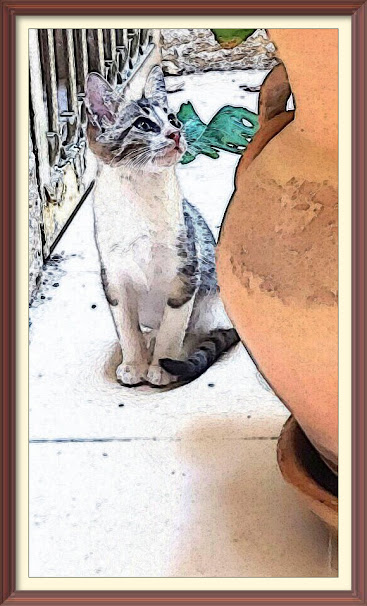 And then, she overlaid that with the Tuscany Art effect at 50%, and added a different frame: 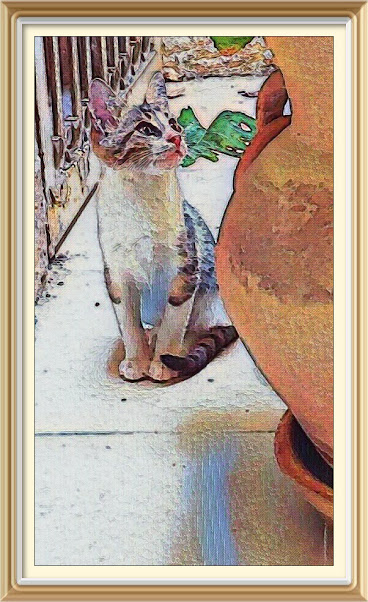 Which do you like best?
Now, We mustn't fur-get to put up the blog hop badges: 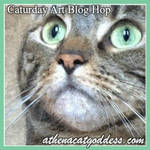 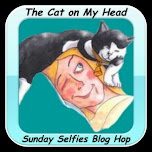 Once more, We wish you all G'mar Hatima Tova.

Email ThisBlogThis!Share to TwitterShare to FacebookShare to Pinterest
Labels: Milo

First up, we wish you a Good Final Sealing too!
Everyday beings another nap or ten and each so very special and a chance to meditate on the wonder of things. Well thats what I tell Mrs H ;)
Milo looks so handsome and endearing. It is great to know he has someone safe and warm as well as 4 round meals a day.
Acts of kindness, no matter the size, given to any sentient being, is generating good karma for this life and lives to come.
The artwork of Milo has turned out rather well, and this week we are torn between the two. So a joint win!
Purrs
ERin

There are so many kitties in this post, we love it. Shimshi, we think you did not want to pose so you have your paws over your nose. (I tried to make a poem fur you) And Milo is handsome and I hope he grows up big and strong. Precious

You all look great, sweet pals. And it was so nice to meet Milo. We are glad to hear Messi is getting used to the idea, too!

Well, Caspurr has napping down to an artform! I need lessons on how to live the life from him! Milo is precious! So healthy and happy looking! Trixie, show us your tail? Please? Best wishes to all on Yom Kipurrrr.

Have a very good Final Sealing and may everything be well. Your kitties are adorable in their various poses. Trixie, Caspurr and Shimshi all look so cuddly that I wish I could pick them up (one at a time, of course).
Milo is a little sweetie. Of course he's a tabby like Shimshi, but he'll have to grown more before you can see his coat in all its glory.

Welcome to little Milo ! And purrs to all of you and Gramma !

Milo is so cute. Love all the pics and art!

Love the napping photos! Our new boy Teddy lies on his back, something none of our othrs ever do!

Y'all do look terrific and that wee selfie is adorable. That kitten looks like he could be our Kiki's brother!

Oops, I also meant to say have a blessed Yom Kippurrrrr!

How sweet of all of you to defer to little Milo for the selfie and art.

He sure is a sweetie!

You all look wonderful…especially little Milo. I’m glad he’s being taken care of by your step-grandma. A blessed Yom Kippur to you all. ~Ernie

Great selfies of all of you. I love how you have Shimshi is covering his eyes. The kitten is adorable. Maybe a home could be found for her so she can get fixed and not have kittens. I love your art, I can't choose a favorite. XO

I think I prefer Lunapic #1.

Happy Yom Kipurrr! I'm so pleased Milo has a home. So many kitties don't even have a yard shed to call their own. Step-Grammy is a good woman to take care of him. He's very cuuute! Love, Dori

YES! We are late! Mom is just now catching us up on commenting! We were so happy to see selfies of all of you (even if you were NOT the official selfies)! And I gotta tell you that were were so surprised to see Milo as the artist model and selfie subject this week! He is a wonderful model! Keep on being awesome! Purrs Marv

You're all so cute and what great artwork of Milo, who is very sweet also🎨 Have good final Sealing too, sweeties. Double Pawkisses from us to you🐾😽💞

Milo is very cute, and I like both art versions.