King of Snooze: Caturday Art and Sunday Selfies With Caspurr

This week, I, Sir Caspurr the Courageous, the Caspicacious, Furrst of My Name, the Snuggle Bug, Commander-in-Chief of the Impurrial Forces, and King of the Tigger-Tabbies, will be leading my fellow J-Cats on the aforementioned bloggie hops.

Here is my Snoozie Selfie: 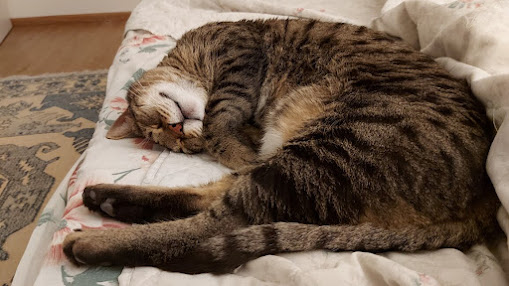 Just in case you were thinking that the C-in-C of the Impurrial Forces was napping on the job, I can assure you that I was peeking out from under my eyelids and thus, Fooling the Enemy.

What Enemy, you ask?

Well, there are lots of Really Evil Humans, you know. Like the ones who attacked people celebrating Independence Day last Fursday evening and murdered three Daddies and badly wounded several more. One of the people killed was axed to death in front of his children!  The Evil Terrorists were only caught this morning - alive, unfortunately.

The three men killed left 16 orphan children between them.

We have to purrtect Mummy against Evil People like that.

Life goes on, however  - Mummy says they won't break Us, come what may.

So, here is my artified pawtrait, for which We used LunaPic's Gauguin filter at 85%, overlaid with the Tuscany filter at 90%. 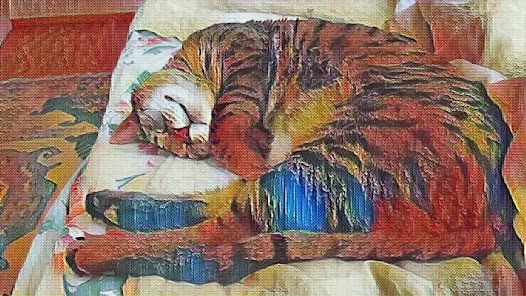 Several galleries have expressed an interest in displaying the finished masterpiece, notably, the National Gallery in London: 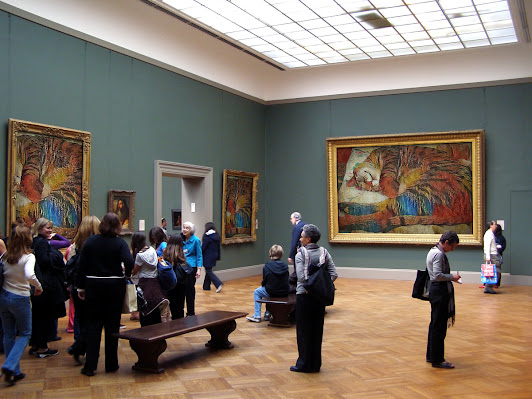 and the Melbourne Gallery: 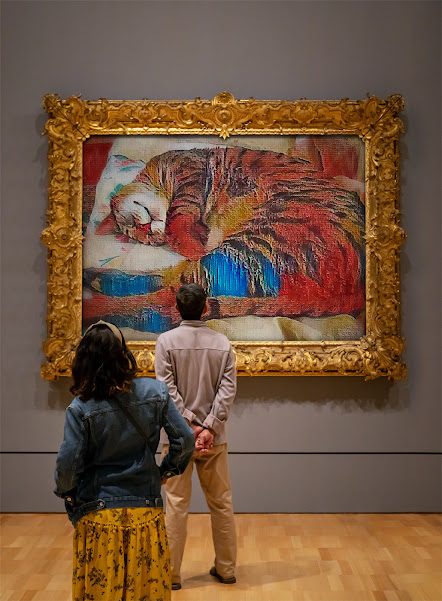 In fact, due to the great demand, it is probable that the painting will be going on an extended tour later this year.

We will see you again next week. Till then, take good care of yourselves and of your Humans.

Those people are truly evil. I am glad they have been caught.
Your art and selfie is lovely.

Looking good, Casspurr. Yes, we saw the horrible news about the attack on Yom Ha'atzmaut. Sheer evil, and we are glad they've been caught.

Wee 'howled' with outrage an utter sadness over what happened inn Israel....wee are so furry sad...
Why must peepss hert each other??? What iss wrong with beein Mewish or Muslim or Cat-olic or Atheist or Black or White or anythin inn beetween??
**sighss**
Pleese Caspurr purrtect Miss Shimona....wee know you will.
Happy Meowmy Day Miss Shimona!
Hope Shimshi an Trixie are doin guud...THE Enchanted Forest was PAWSUM!
***nose kissess*** BellaDharma an (((hugss))) BellaSita Mum

There's nothing wrong with napping on the job, sweetie! MOL

Cute sleepy selfie and I love your art. How sad about those murders. XO

You are a masterpiece Sir Caspurr and I know you'll all do your best to protect your Mom, always.

That is evil making true the words, evil personified. Caspurr, it is a joy to see you and the rest of the family.

You sure are enjoying your easy, Caspurr. And I hiss and spit at those evil humans! ~Ernie

If you need us we terriers are at the ready to come and bite any evil ones...

You're a piece of art, sweet Caspurr💗Peaceful Pawkisses for a Happy Week ahead to all of you🐾😽💞

Your portrait will look great in the galleries!