And just see what Mummy got Me for My Prezzie! A lovely new Scratcher!
It's round and made of corrugated cardboard, and inside, there are two little white balls, with a silver bell in each one!  You can't see them in  this picture, but I promise you, they are there. 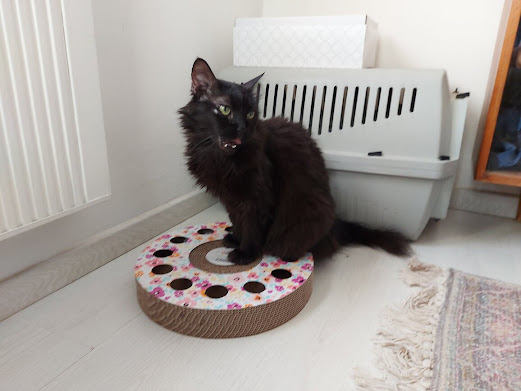 Since the Scratcher is suffused with catnip, I had to fight off My Brofurs, as they would have stolen it from Me!

The photo above was a little bit blurred, so Mummy decided to artify it, using LunaPic's Yarn effect. 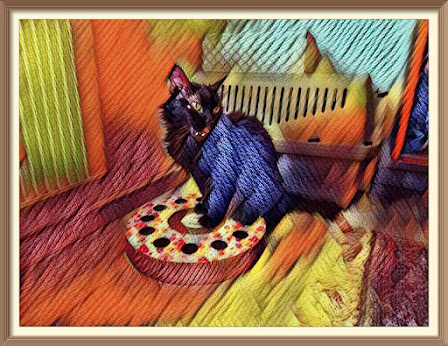 This is Our Entry in this week's Caturday Art Blog Hop, hosted by the Wise and Beautiful Athena and her HuMum, Marie.  Here is their Badge:

You remember I said this is a Double Celebration? Well, that's because the day after tomorrow, Tuesday August the 17th, is Black Cat Appreciation Day!
You know, for some reason Nobody in their Right Mind can fathom, Black Kitties have suffered a Bad Press. Some People (especially in the USA, where We have Many, Many Furriends) think Black Cats bring Bad Luck!?

What absolute Poppycock!  In other countries, there are different traditions.  In some countries, We are considered omens of GOOD Luck. In other countries, like Britain, where Mummy was born, there are mixed traditions. In certain  circumstances, We are thought to be harbingers of Misfortune, while in others, the opposite is true.
YOU all know the Truth, don't you?
BLACK CATS MATTER.
Mummy found this lovely, little Welsh rhyme about black cats, on Wikipurrdia:

Whatever the case, here is a picture of Me, in all my Glorious Black Beauty, guarding the entrance to the Audience Chamber (aka the Living Room or Salon) of My Home. 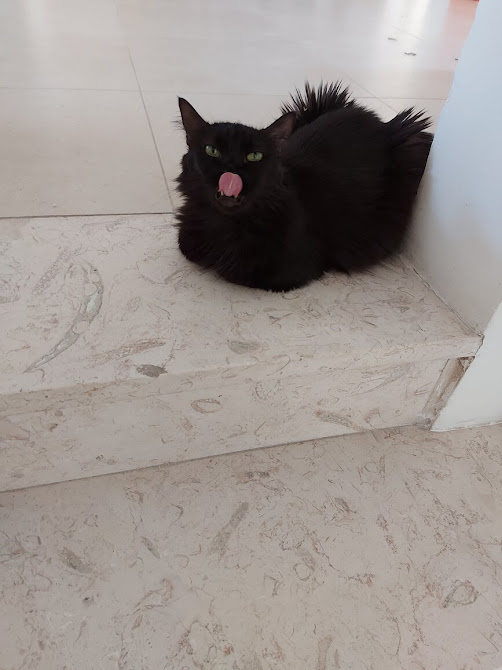 This picture, featuring not only My Beautiful, Glossy Black Furs and Jewel-like Eyes, gives due prominence also to my Raspy, Little Pink Tongue.  I was sticking it out at Mummy because I didn't really feel like having My Selfie taken at the time.  But Mummy, who is a Champion of Self-Delusion, doesn't get that. She thinks it's Cute! Well, of course it's Cute. It's My Tongue, after all. But that's hardly the point!

Be that as it may, this picture is Our Entry into the Sunday Selfies Blog Hop, hosted by Our Dear Furriends, the Kitties Blue and their HuMom, Janet - and here is their Badge:

They are celebrating the 7th Anniversary of the Sunday Selfies Blog Hop - so I guess that's a THIRD cause for celebration this week!
Before We go, We want to remind you all that the Evil Coronavirus is still on the rampage, so you must be extra careful, and take Good Care of Yourselves and of Your Humans.

Happy Birthday and Black Cat Appreciation Day. Your selfie is adorable. Mom loves photos of cats with their tongues out...she's weird like that.

So many things to celebrate. First of all happy belated birthday. 🎊🎂🎉🎁🎈 We absolutely love black cats at our household. Mom and Dad had two: Thelma and Twinkle. None of us were around then. Your art turned out great as it made the lovely tongue more noticeable. And we absolutely LOVE your tongue selfie. Thanks for being part of our Sunday Selfies seventh anniversary. XOCK, angel Lily Olivia, angel Mauricio, Misty May, Giulietta, angel Fiona, Astrid, Lisbeth, Calista Jo, Cooper Murphy, Sawyer & Kizmet

Trixie you are a magnificent black beauty! We will be celebrating and congrats on that Birthday Scratcher. Nothing like having fun with new toys
Toby

Happy Birthday beautiful Trixie! And Happy Black Cat Appreciation Day! I love black cats. I have 2 now and 4 at The Rainbow Bridge. XO

We love your artwork and the photo with your tongue out. Humans do seem to think it's adorable when kitties do that. ♥

Happy Purrthday Trixie ! And many more !

Happy Birthday bootyfull Trixie. We are so honored to be your furiends. We luvs black kitties and we luvs you. big hugs fur all and nose bumps to you.

Happy Birthday, beautiful Trixie! And happy Black Cat Appreciation Day, too! We are huge fans of housepanthers here, of course. They are lucky and amazing. :)

Happy birthday, Trixie. It is my birthday today so we are both Leos! Your art is lovely.

Happy Birthday, Trixie! What a nice scratcher you got. And you are a beautiful black cat. Black cats rock! ~Ernie

I LOVE that cat toy, I need to check it out for our cats. The cardboard, the nip AND jingly bells? Has to be a total winner!

That scratcher is SO cool! Love, love, love the photos.

Happy Birthday you beautiful girl...and glad you were able to fend off your brofurs. Mom told me to tell you that she LOVED your comments to me about my wearing a thong bikini bottom.

Alasandra, The Cats and Dogs said...

ewe bee gorgoeuz...and we want ta send ewe best fishez and happee day wizhez; we hope yur day total lee rocked, ya had fun, ya cauzed trubullz, ya had sum perch pizza and donutz, and heerz two a yeer a head filled
with happeez and healtheez and two de next 90 ♥♥♥♥♥♥ ♫♫♪♪♫♫♪☺☺☺☺☺

Happy Belated Birthday greetings to YOU, Trixie!
While we were all meezers...because petcretary was not allergic to us as a breed, she loves black kitties, too!

Love the 2 celebrations! Both great. Love the pink tongue pic too!

I'm sorry I'm late to your birthday (things are busy here). Happy 9th Birthday! Those ball track toys are a lot of fun. Wolfie and Tilly enjoy theirs and I hope you're really enjoying yours. Obviously we think most cats, and especially black cats, are good luck!