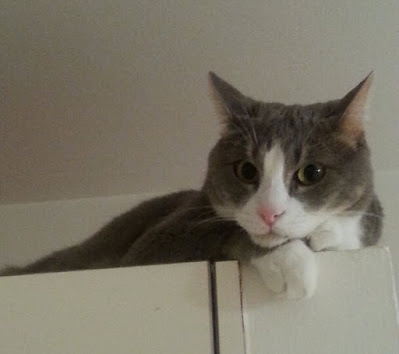 Well, Halloween has been and gone - not that it's celebrated here in Israel, except for sometimes showing some scary, Halloween-themed films on the TeeVee. Come to think of it, even that seemed to be missing this year. Oh! Wait! Maybe that's why they screened the opera "Macbeth" by Signor Giuseppe Verdi, based on the play by Mr. William Shakespurr. It's got the Three Witches in it, hasn't it? BUT - all those humans caterwauling away? Now THAT'S what We call scary (mol).

The weather is still not what you would call autumnal. The tempurratures are in the lower twenties Celsius and there is, as yet, no sign of skywater - but they say We might see some later in the week. Not that it really affects Us. It might affect Mummy, though, as the Second Lockdown is now starting to open up. And, of course, they are making the same mistakes as last time. The Humans are incapable of sticking to a Plan. There is always some special interest group putting on pressure to make them an exception to the rules and if they also have Pawlitical Clout - they get their way!

There is some Good News, though. This meowning, at two hospitals in Israel, they are starting clinical trials of a vaccine that has been developed against the Evil Coronavirus.

As usual, We are purr-ticipating in the Caturday Art blog hop hosted by the Beautiful and Wise Athena and her HuMum, Marie, and in the Sunday Selfies blog hop, hosted by the sweet Kitties Blue and their HuMom, Janet.

You can see my Sunday Selfie above. Mummy gave it a seasonal touch with the Autumn art effect from LunaPic, and then added the final polish by using the Autumn Frame effect from PhotoFunia. 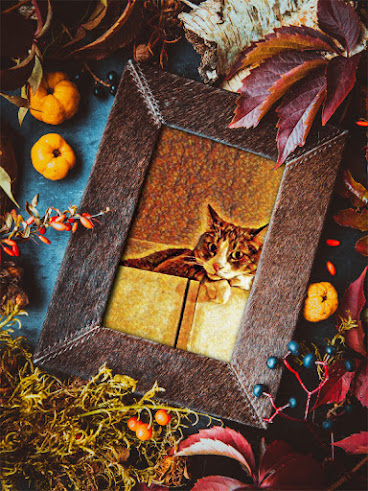 Finally, We want to remind you (not that you need reminders, but maybe your Humans do, Humans being notoriously furgetful) that the Evil Coronavirus is still with Us, so it is impawtant to observe all the Rules put in place for your purr-tection, keep Social Distancing, and most impawtant of all - Wash Your Paws furrequently.

And now, it's time to start hopping between those bloggies!
Off we go!!!
Posted by The J-Cats at 2:02 PM

Your selfie is wonderful and so is your art! Dang, that's way too cold already, y'all keep warm.

We wish the governments would not bend to special interests like that. It's sad that the same mistakes are just being made.

What a cutie you are today! I like the term you used, 'skywater' - what a wonderful word!

That is lovely art.
We go into a second lock down on Thursday for 4 weeks. It is not just to get the cases down, but the government says to help everyone have a more normal Christmas. That is asking for trouble! The same idiots who won't take it seriously now will all be back down the pub hugging each other again at the end of the 4 weeks.

That is a great selfie Shimshi and very nice Art

A truly wonderful and inspiring selfie and artwork. Heres hoping wee are blessed with a vacine that cures the ails of us all rathe than the few.
Stay safe and well, and heres hoping the rians will come to wash away more than the sand in our throats.
Purrs
ERin

What a great selfie, Shimshi. And it made for good art too. Our weather has gotten so cold lately. We wish we could trade a little of it with you.

Do you wish to have our snow?? Yup, we have it; frozen skywater; sheesh, way too early!
Lower 20's C sounds wonderful about now...

Nice selfie and great art, too:)

I love the filter it looks so autumnal and warm!

Your art is wonderfully festive!

Shimshi, That's a wonderful selfie. I love seeing your cute pink nose. We haven't had any sky water yet either, and we could really use some. Paws crossed that several good vaccines are developed and the humans can behave themselves to get this Coronavirus under control. You created a wonderful artwork with fall colors.

What a beautiful Selfie of yourSelfie, and some great artwork too, Shimsi😸Pawkisses for a Happy Day🐾😽💞