A Bunch of Celebrations: Caturday Art and Sunday Selfies with Caspurr

Shavua Tov (a Good Week) to you all, from all of Us here and especially from ME, Caspurr, King of the Tigger-Tabbies! 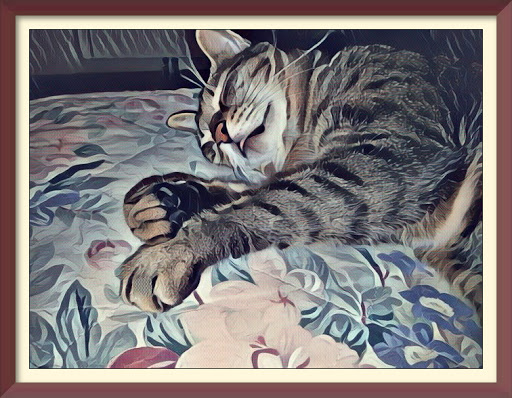 The picture you see above is Our Official Entry in the Caturday Art Blog Hop, hosted by the Wise and Beautiful Cat Goddess, Athena, and her HuMum, Marie!
Here is their badge:

The Original of this Pawtrait, before We artified it with the Grey art effect from LunaPic, at 75%, can be seen below. 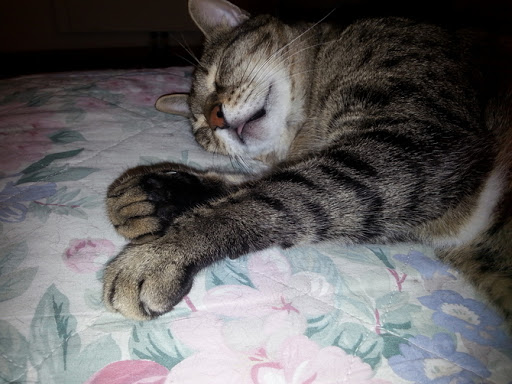 This one is Our Entry in the Sunday Snoozies Selfies Blog Hop hosted by the delightful Kitties Blue and their HuMom, Janet. Here is their badge:

As you may know, this time of year is choc-a-bloc full of celebrations! Last week, We had a lovely moonlight Tu b'Av pawty up in the Enchanted Forest. And yesterday, Caturday, was International Cat Day (although actually, EFFURRY day is - or should be - International Cat Day). And this coming Wednesday,  August 12th, is My Sisfur Trixie's 8th Birthday, which We will celebrate (in the Enchanted Forest, naturally) at 7 pm Israel time and to which you are all invited. And don't forget that coming up next week is Black Cat Appreciation Day, on August 17th. We usually celebrate that and Trixie's birthday together, because they are only five days apart and Trixie is, after all, a Black Cat. But since this year has been made wretched by the Evil Chinese Coronavirus, We all think that it's best to have as many pawties and celebrations as pawsible, so - as We said - Trixie's Birthday Pawty will be on Wednesday, and We will update you next week about the details for the Black Cat Appreciation Day Pawty. Just remember to Save the Date!

Oh! I almost forgot! I wanted to tell you about the Intruder Kitty that tried to invade My Our Territory!
Yes, Fellow Felines! Incredible as it may seem, one evening last week, a ginger kitty followed Mummy home after She had been out feeding the Homeless Kitties on Our Street and jumped over the gate onto Our Porch! Mummy heard a meowing outside and She opened the front door and there was an Intruder, trying to get into the house. Mummy guessed that the intruder kitty hadn't managed to get to the feeding point before the other kitties ate up all the food, so She shooed the kitty out and closed the gate again and went to get some more kitty food. When She went back and opened the front door, the Intruder had returned! He had jumped back in over the gate once more. Mummy shooed him out again but put some food for him on the stairs, outside the gate, which She locked once more.  That seemed to do the trick because when She opened the door the following morning, the Intruder Kitty was gone. But now, he waits for Mummy effurry night when She goes down to feed the Homeless Kitties, to make sure he doesn't miss out on the food.

Now, kitties, it is time to start blog hopping. But before We do that, We want to remind you all, to take care of your Humans, make sure they wear their masks whenever they go out, and stick to the Social Distancing rules.

Be safe. Be well. And We'll see you at Trixie's Birthday Pawty on Wednesday.
Posted by The J-Cats at 4:40 PM

Oh, a ginger introoder! If he was here I would invite him in. That is only because the boys are no longer here. They allowed no introoders on their land.
I like your art. It really shows your tiger stripes off.

That's a fabulous selfie! Such wonderful celebrations, y'all are a fun bunch!

That is a lot of celebrations. That is funny that Introoder is now coming to the kitchen to intercept the meals. Smart fellow. He is Ginger after all MOL

Awww, the dude just wanted the food, and thankfully your staff could help him out with a meal. Bless you.
Now as to all these celebrations, my you guys do know how to party!
We will send our birthday and black cat wishes here and now, and I am sure it will be an absolute hoot! No owls included, MOL
Stay safe and well,
Purrs
ERin

You are such cutie and I love your art. That is kind of your mum to feed homeless kitties. I feel bad for the intruder, he probably had a home once. I wish you could send him to me, but I know there is no way so I will just pray for him. We will be here for the party. Shavua Tov. XO

You look so cozy! Can Lexy and I join you? Enjoy your celebrations!

That is truly a beautiful work of art. But then Caspurr, YOU are a work of art. I love hearing about the Ginger Kitty. He is smart and goers toe here his foster mom, your mom, is.

Good thing that ginger kitty decided to go elsewhere. We love your art! That effect made the photo so much better!

Oh I love your filter picture, it looks amazing. Great selfie too.

Love the picture and art! Love that your mom has made a new friend.

Caspurr, that's a wonderful photo and artwork of you snoozing. Hopefully the intruder kitty doesn't become a pest. But it's so sweet of your Mom to make sure he's fed.

Its so good that your HuMom took pity on the poor ginger kitty...maybe someday he might want to part of your furmily as he rightly senses a good thing going there!

You are going to have much fun with all your catabrations!

Happy of the many holidays to you!