We don't think We have effur told you about Mummy's furrst kitty, have We?
The Most Beauteous and neffur-to-be-furgotten Minxie, Queen of Cats.

Well, We think it's high time We did so, and there is no day better for doing so than today, because today is Minxie's yardzeit, the anniversary of the day she flew away to the Bridge.

Mummy gotcha-ed Minxie some time in the summer of 1980, when she was a tiny little kitten, just a couple of months old. Mummy found her down in the garden shared by the residents of the apartment block where She was then living and to save her from being "adopted" by the neighbour's children, who had absolutely no idea how to look after animals, Mummy took her in herself. Those children had previously "adopted" all kinds of other animals, including pigeons (who didn't last long) and even a donkey, which they kept in their living room!!!
Even though those children meant well, and even though Mummy had neffur had a pet anipal before, She thought that sweet little kitty had a better chance of survival with Her than with them.

So it was that Minxie came to live with Mummy, and because she was such a little minx (says Mummy), that's how she got her name (mol).

All this, of course, was in Olden Times, before the Digital Age and so all the pictures of Minxie were taken with an old-fashioned camera, in which, so We have heard, one had to put in a film on a spool or cassette and then take a picture, and once the picture was taken, it couldn't be erased. And then, Mummy would take the film to a photographic shop and they would develop the pictures and after a few days, Mummy would get them back. And in those Olden Days, Mummy couldn't know how the picture would turn out until she got the developed pictures back!

Yes, Life must have been really hard back in the Old Days.

Anyway, Mummy scanned some of the old pictures of Minxie and uploaded them to her New Computer (which is driving her crazy, but more about that some other time) - and now We can show them to you all.

Minxie loved to sit in the bath tub. If there was a towel draped over the side, she would pull it into the bath tub and sit on it, like this: 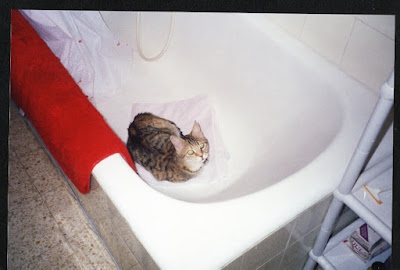 And another thing Minxie liked to do was to curl up on the sofa next to one of Mummy's dollies (Mummy has a beautiful collection of pawcelain dollies, from all over the World, most of which, She keeps well out of Our reach - We have no idea why!). Here she is with Arabella, who was the furrst dolly in Mummy's collection - and with Felix, who We also like to play with: 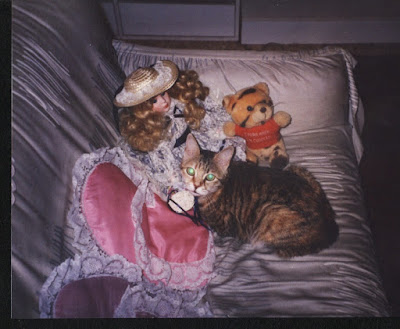 When Mummy would come home from work, She would call to Minxie from down below, in the parking lot, "Minxie! Minxie!" - and Minxie would run to the open window and answer her and then run to the front door to greet her.

Yes, Minxie and Mummy loved each other furry much.

Anyway, in 1995, Mummy found a furry large lump in Minxie's tummy, where no lump should be and when She took Minxie to the v-e-t, he said that it was in all probability cancer. He operated on Minxie and removed the lump but Minxie grew weaker and weaker and then Mummy discovered another lump. Minxie stopped eating and hid herself away in the wardrobe and Mummy knew it was time for the   v-e-t to help Minxie to the Rainbow Bridge.  Mummy stayed with Minxie and held her paw till she was Free - and that was the hardest thing Mummy had effur had to do. Mummy had neffur had to help an anipal to the Bridge before - She felt her heart was broken. That was on June 12th 1995 - just three days before what would have been Minxie's 15th birthday.

Mummy's heart was broken - but Minxie was watching over her from the Rainbow Bridge, and a couple of months later, she sent Possum to her. And a few weeks after that, Minxie sent Pixie to Mummy as well, for Good Measure.
Now Possum and Pixie are at the Bridge too, together with Minxie and they are all three of them watching over Mummy. And to make sure Mummy wouldn't be too lonely, they sent Us to her.

And the Great Cat in the Sky watches over all of Us.
Posted by The J-Cats at 9:21 PM

What a bootyful story 'bout such a gawjus kitty. Minxie looks a lot like me's sis Lexi. We so miss her. But we're sure they've all met up and are havin' a great time playin' and rompin' 'round. Fanks fur sharin' her story. Big hugs

Minxie and all your Mom's other angels are indeed watching over all of you ! Purrs !

Minxie sounds like a very special kitty. Thanks for sharing her story with us.

That was a sweet tribute to Minxie. She was a beautiful girl. XO

Thank you for sharing your wonderful story of Minxie. She and your Mom were very lucky to have found each other and have had 15 years to make so many heartwarming memories. Your memories & love will live forever.

It is sometimes VERY GOOD to remember wonderful kitties and tell others about them.

And TBT says he remembers all about those ancient times before cheap digital pictures (even goes back before color pictures)!


What a heartwarming tail. Minxie was a gorgeous kitty. All the kitty kats that we have had the pleasure to love and lose are forever with us. Losing a kitty is so hard. I don't think I'll ever get over losing Kali.

I loved learning of Minxie. What a beautiful and fortunate little girl to find a loving and lovely mommy to adopt and live happily with.

Mommy said she knows how extraordinarily sad and what lingering sorrow it is when one of us goes off to the Bridge. She knows Minxie is still alive in your mind and heart, just as our Ones Who Came Before are.

pee ess. I am asking the kitties for some consulting about a naughty thing the Sticky Person committed today. I think one is a Cattourney?

Mummy and me just loved the story of Minxie! ❤️❤️

Thank you for sharing about Minxie! She sounds like she was a super special kitty.