Well, as I mentioned last week, on Shabbat afternoon, We had a Huge Pawty to celebrate Shimshi's Coming-of-Age (he is now One Year Old) and Caspurr's second Gotcha Day.

Shimshi is a furry impatient kitty. When Mummy gave him the Prezzie She had bought him, he practically tore it out of her paws hands and then tried to climb into the bag it was in: 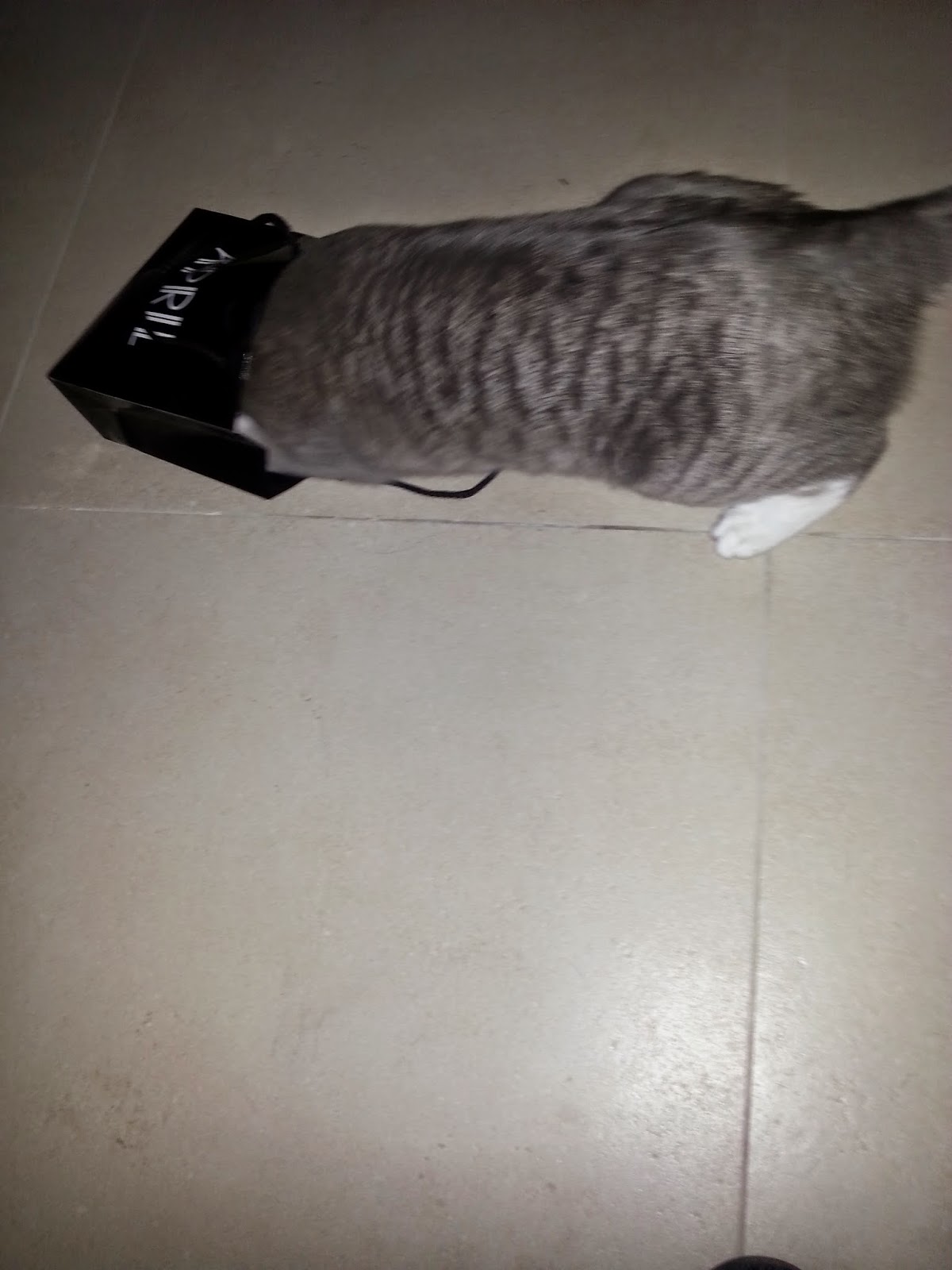 And when he saw what it was (a lovely, bouncy rubber ball with lots of fevvas), he ran off with it before either Caspurr or I could so much as get a look at it! It's lucky Mummy was there with her flashy box to show you what it was like before Shimshi could pull all the fevvas off! 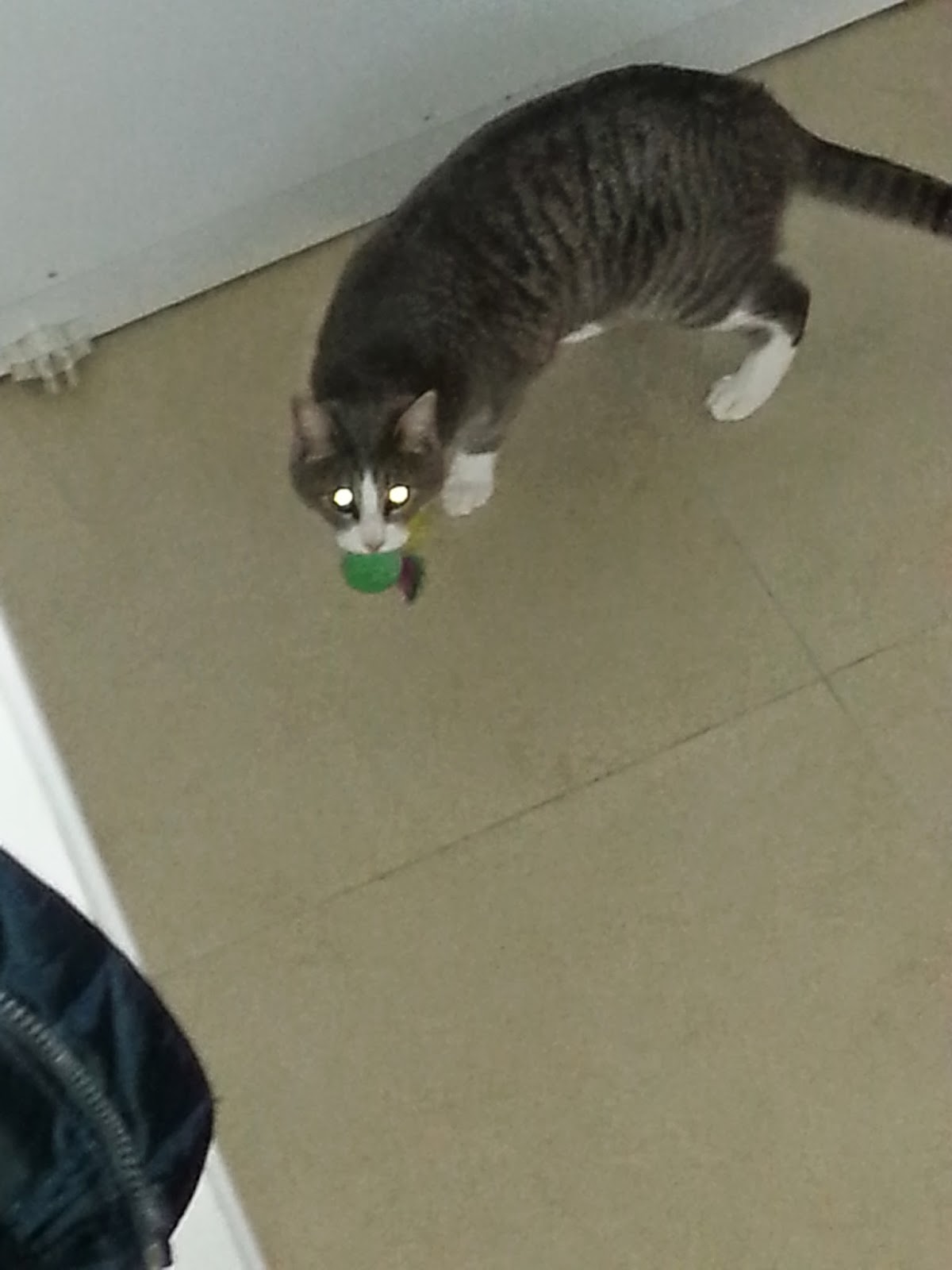 Naturally, Caspurr was off in a flash after Shimshi and the pretty green ball: 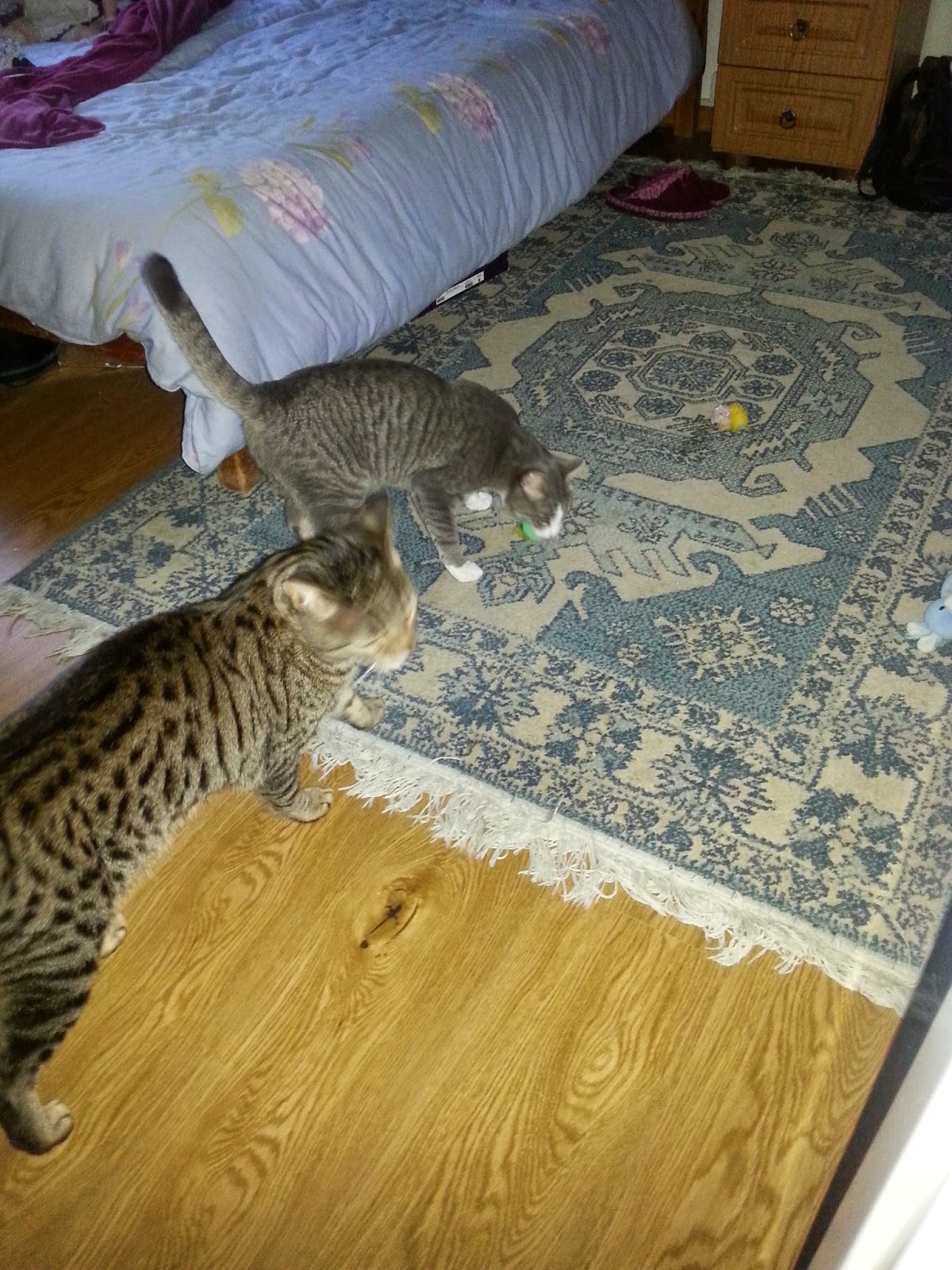 But Shimshi was having none of that so Caspurr had to make do with an old sock of Mummy's filled with catnip. That was an exceptionally good toy, because it smelled of both Mummy and nip (purrs). 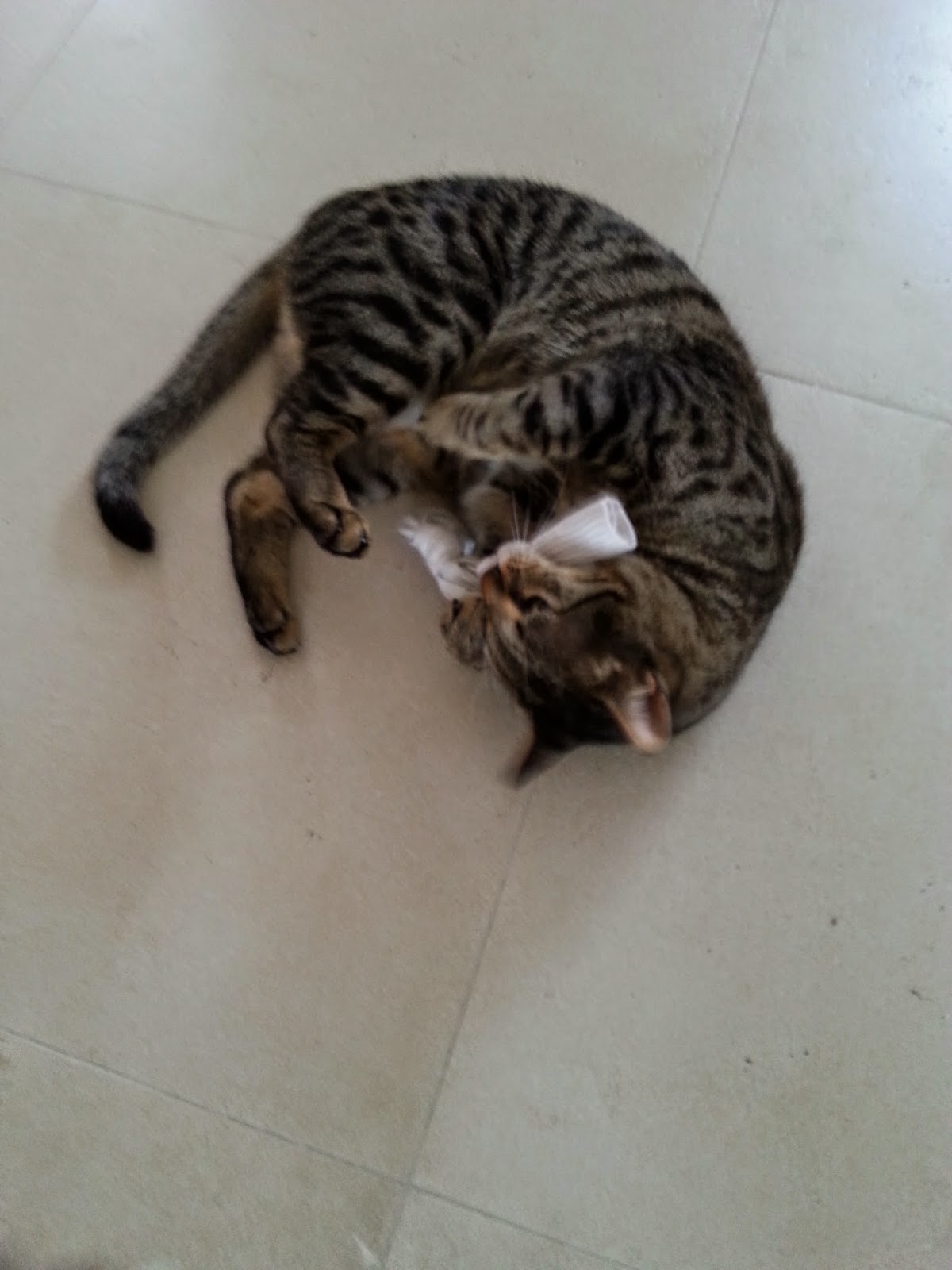 As for Moi, I was so exhausticated from all the pre-purrations for the Pawty, I just had to have a rest! 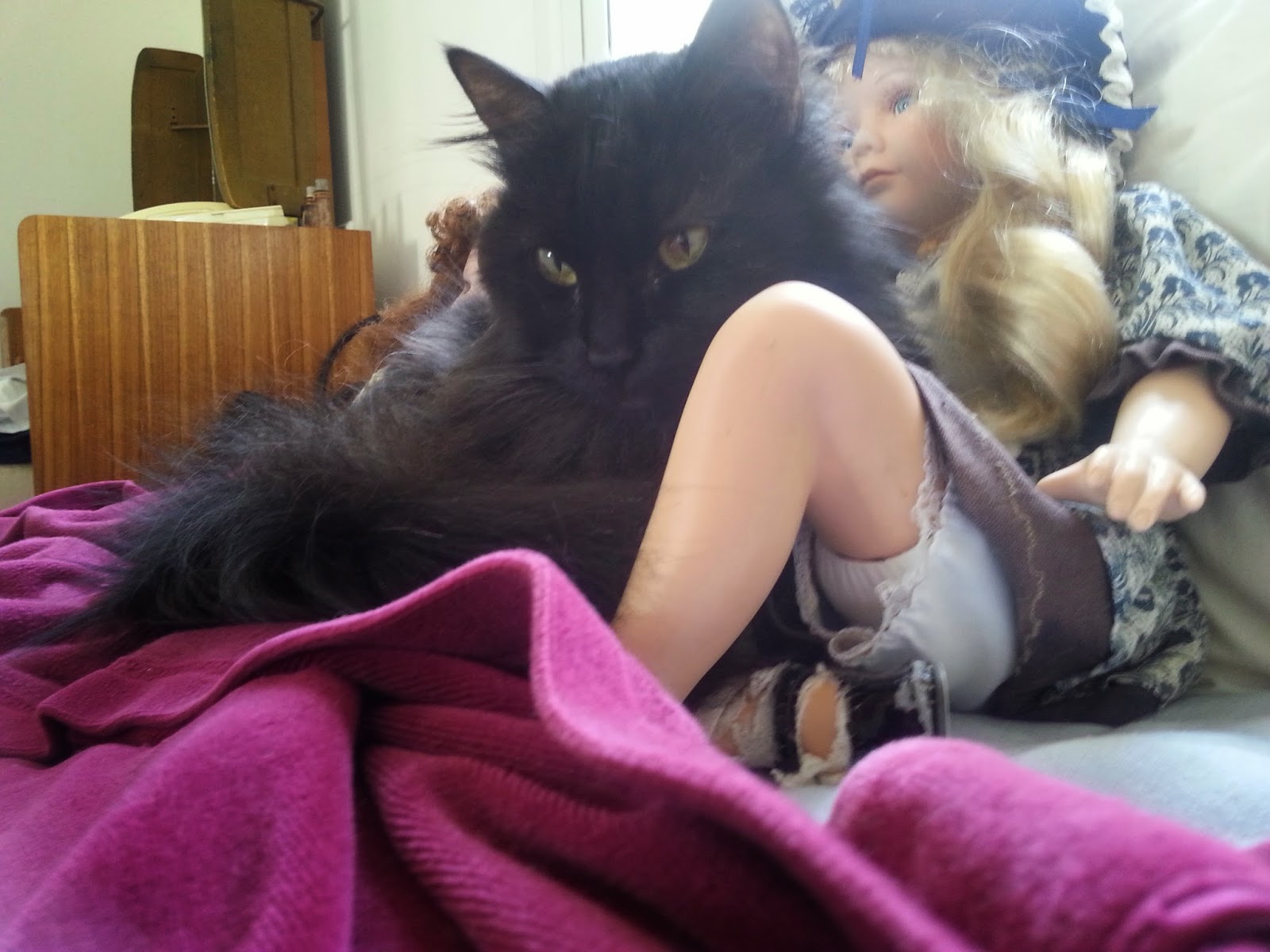 I just hope my brofurs truly appurreciate all the Hard Work Mummy and I put in to make their Joint Pawty a Success!

Now - lest you should think We are done with celebrations for a while - We are looking forward to Yom Ha'atzma'ut (Israel's Independence Day) which is celebrated this coming Thursday! The traditional way of celebrating that is with a Barbecue in the garden or yard. So We shall be having another Pawty in just Four Days Time - at 3 pm Israel Time.

In general, it means chick-hen. The Humans also have barbecued beef steak sometimes.

OH you have had such a joyous time!!! Happy Days.

And more to come! We hope you will join us on Thursday for our Yom Ha'atzma'ut Barbecue.

What a good time you all had!

Happy First Birthday Shimshi. Your bouncy feather toy sounds like a lot of fun. And happy Gotcha Day Caspurr. Looks like you were enjoying that nip sock!

Sounds like the green fevver ball is gonna be real popular fer awhile!

All the fevvas are gone already and Shimshi has chewed away a good part of the ball!

CONGRATULATIONS!!! You're one of the winners of a copy of Rescued: The Stories of 12 Cats, Through Their Eyes. Silver, Savvy & I need your mailing address to send you your prize. Please comment on MY blog with that. Don't worry, I use comment moderation so I'll erase your comment without publishing. No one else will see your address.

Happy 1st Birthday sweet Shimshi and Happy Gotcha Day to sweet Caspurr. That barbecue sounds soooo good. Keep enjoying the celebrations and get some good naps in between. Hugs and nose kisses

Have you address and can now send you the book but I think I might need a person's name for international shipping. Would you mind leavin' one on my blog along with a phone number? Not sure if Amazon will require that or not. purr

It looks like Shimshi made short work of the fever toy!! Happy Independence Day (belated) !!