The Storm of the Century

It is I, Queen Trixie, Alpha-Kitty Extraordinaire!

Last week, for the third or fourth time in My Life (which has, so far, lasted all of two and a half years), We had a storm of the kind which, according to the Human Weather Forecaster, we witness "only once in a Century".

Mummy had the heating on all day and my brofurs and I sat by the windows and watched the pretty white snowflakes falling. 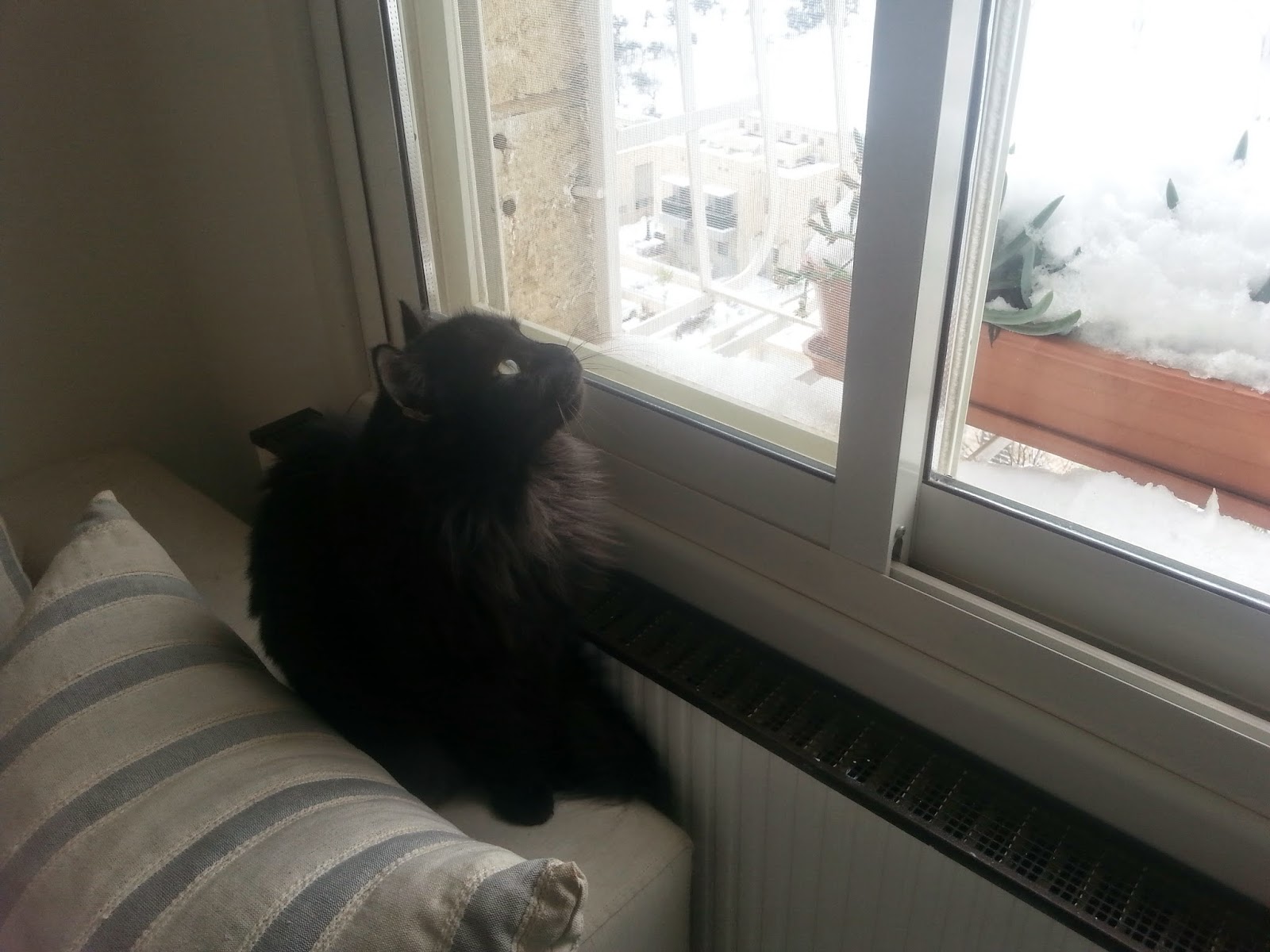 And Mummy played with Us and threw Ping Pong Balls around for Us to chase.

But best of all, once the snow had stopped falling and the sun came out, She let Us out of the flat onto the entrance porch, to have an up close and purr-sonal look at the snow. 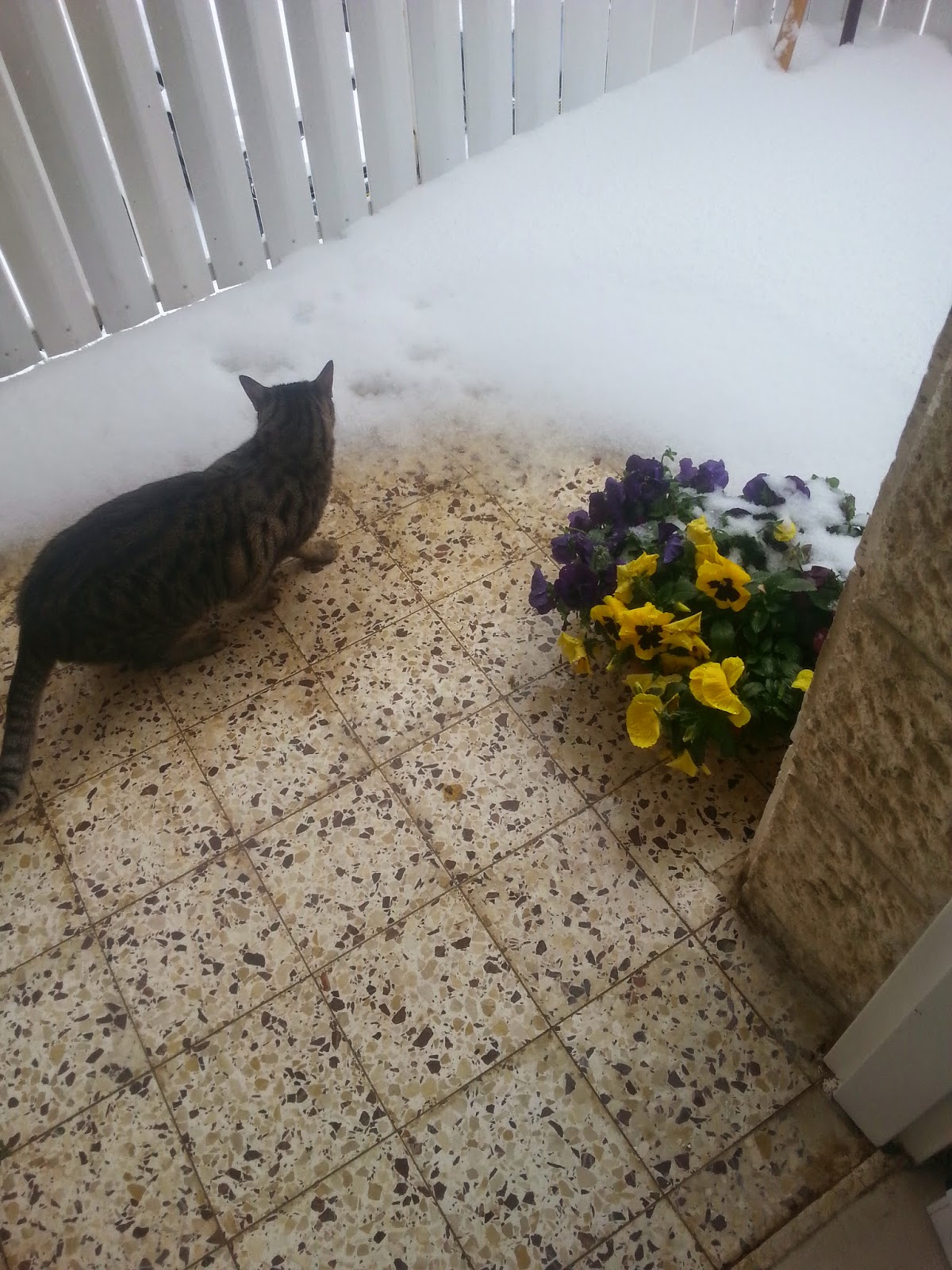 Caspurr didn't like it furry much. He was more interested in the possibility of munching on the flowers. I, purr-sonally, can take it or leave it. Mostly leave it (mol). We all decided it was better indoors, where we could stretch out on one of the radiators. But I was not pleased when Shimshi decided to steal my favourite radiator perch!!! 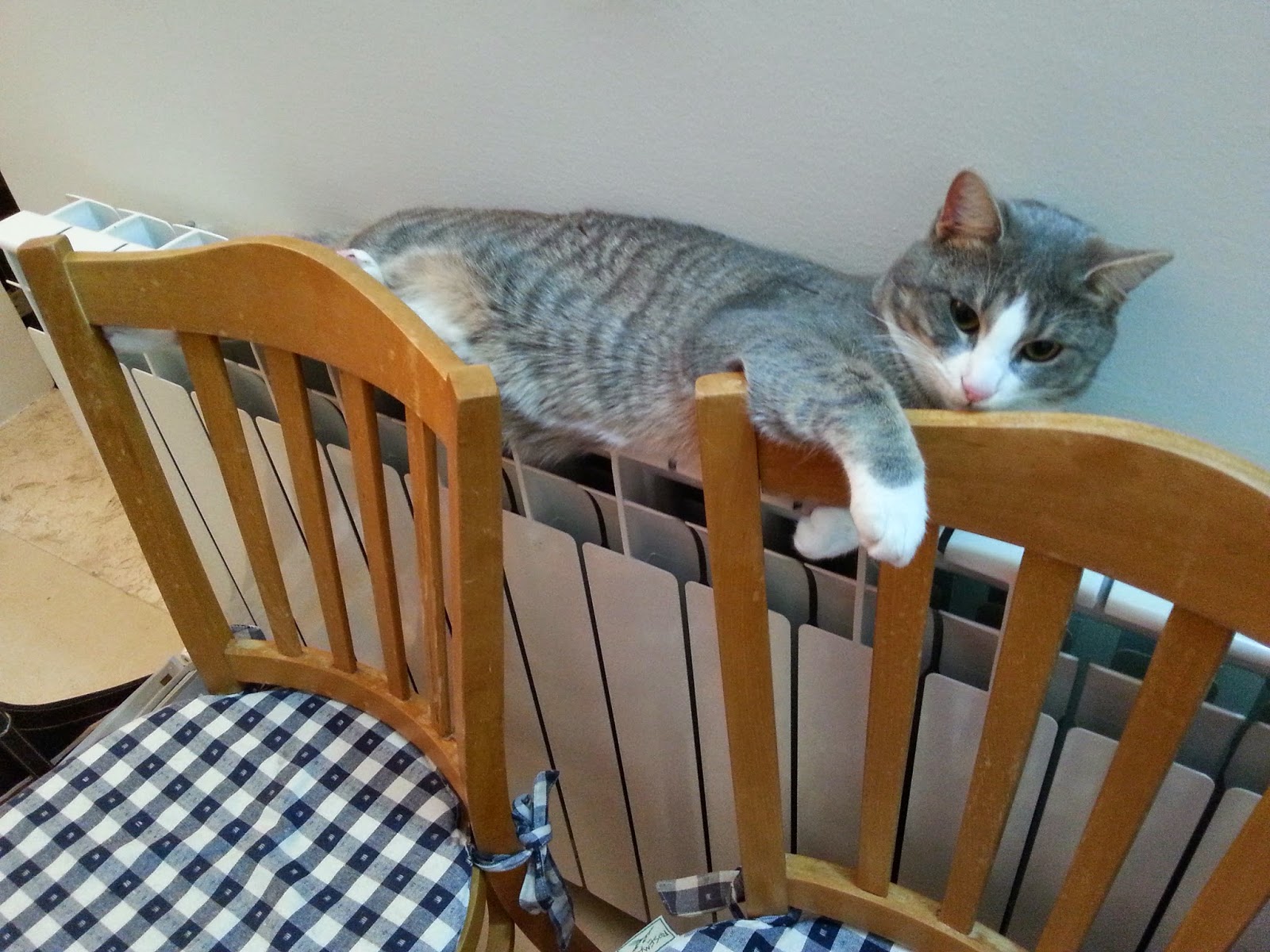 That Baby Mancat has waaaaaaay too much Chutzpah for my liking!
Wouldn't you agree?
Posted by The J-Cats at 1:25 PM

MOL I hog the radiator too, except today as there is no heat on cos the boiler is being replaced!. Humans are moaning as there is no water either!! It'll only last for a short while!! Keep warm xx

Snow and flowers? That is really weird!

I think I would really like a radiator. We have central air and heat from the ceiling--not even a floor vent!

Morgan has that trouble too. Sometimes Hazel takes the top perch of the cat tower (which everyone knows is Morgan's perch!). Good to be inside in that weather.

We don't have radiators. But if we did, I bet Ernie would hog them. He likes to lay right on the heat vents.

Oh yes, Trixie. Shimshi has a lot of Chutzpa taking YOUR radiator!

We saw on the news that Israel got lots of snow. Our Dad has been there a bunch of times for work, but never when it snowed! Stay warm, dear friends.

I've never seen snow and from the way you describe it, I don't think I'm missing much. Cold wet stuff and kitties aren't a good mix. I've never seen a radiator either. I have floor vents with hot air pouring out. I love laying on them.

My 3 have never seen snow either.

TBT tells us that "Storms Of The Century" seem to happen 5-Eleventy times each century...

What are these floor vents We are hearing about? That sounds like a really good idea! So does heat from the ceiling. But We would like to keep our radiators also.

Meowmeowmans - we remember your Dad mentioning that he had visited Israel, but We are thrilled that he has been here so often! What is this work he does, which brings him over here so often?

My angel sister Snookums loved to lie on the floor vents when heat came out, but I just like to snuggle in one of my beds to keep warm. We have snow coming again tomorrow. Hugs and nose kisses