Hallo again, Effurryone and Shavua Tov (a Good Week) to you all.

Except that it isn't!  We have just learned that yet another of our cyber anipals, Smores (the brofur of recently departed Furrsbook furriend, JulioDeCat) has gone to join his brofur at the Rainbow Bridge.

Please visit his Mommy, Ilana, and leave her some words of comfort.

This year seems to get worse and worse, with effurry day that goes by! We just want it to be over!

We don't feel much like blogging when effurrything is so sad and dreary - but then We remember that the Social Distancing rules are keeping Us all apart physically so it's all the more impawtant to keep in touch by Cyber. Nobody - Feline or Canine or Avian (or, indeed, any other species of Living Creature) should have to feel Alone and Friendless. So, although We often feel We just want to curl up in a ball and be left alone to cry, We are going to join the Caturday Art and Sunday Selfies blog hops, hosted respectively by the wise and beautiful Athena and her HuMum, Marie, and by the magnificent Kitties Blue and their HuMom, Janet, and visit as many of Our Furriends as We pawsibly can. And We most earnestly urge you to do likewise.

So here is Our Caturday Art, featuring a collage from LunaPic of pictures of Me, Caspurr the Courageous. 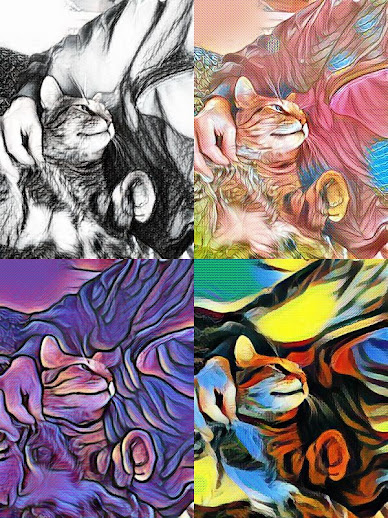 The art effects used are (clockwise from top left):
Sketch2, Beauty (which I purrsonify, Mummy says), Dreaming (which I no doubt was) and Monster (which I am not! Although sometimes, Trixie - and even Mummy - call Me one...).

It proved such an attraction that We were contacted by the management of the Burlington Arcade off Piccadilly in London (that's a swanky shopping mall, where Mummy likes to go window-shopping whenever she's in England - but could neffur afford to buy anything there, it's So Expensive!). They wanted to display the collage there.  Of course, We agreed. 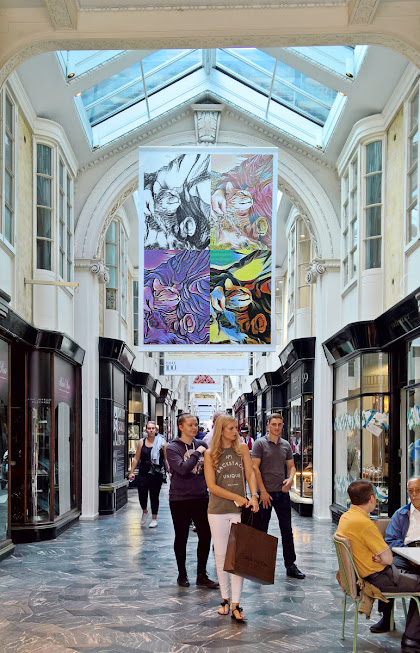 This is the original picture, and it will serve as my Sunday Selfie this week. I was having a little snuggle in Mummy's lap (you see, She doesn't really think I'm a monster!), enjoying head and chin scritches and - if I remember rightly - Tummy Rubs too. 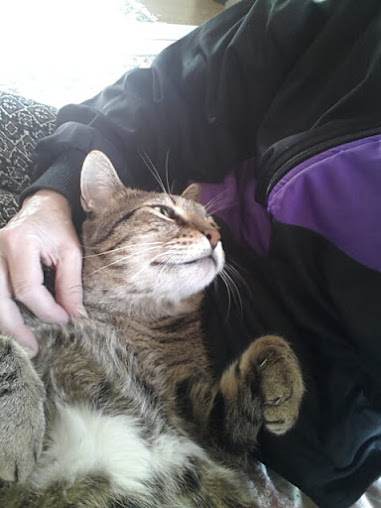 Here are the blog hop badges:

There is one more thing We want to mention before We go. A furry wise Human named Albert Schweitzer once said that there are two means of refuge from the sorrows of this world - Mewsic and Cats. Of cats, We have spoken at length. As for Mewsic - you remember that last week We mentioned that Mummy and her Caterwauling Club would be pawticipating in a concert at the weekend? Well, for those of you who weren't able to watch the concert over the live link on MewTube, here is a link to a recording of the concert.  (Mummy will probably write about it herself on her own bloggie later this week.) The broadcast starts at 3:09, there are a couple of interviews (in Hebrew) with the people responsible for producing the concert and the concert itself starts at 18:08.
Enjoy!
See you all again next week - and remember: observe all the Social Distancing rules in place for your purrtection and the purrtection of your Humans, make sure they wear their facemasks when they go out, and most impawtant of all - keep washing your Paws!


PS. We have tried to link to both blog hop hosts and failed - whether because of a glitch at Our End, or at theirs. We will try again later, or tomorrow.
Posted by The J-Cats at 4:13 PM

We're sorry to hear that Smores was needed at the Bridge. We are purring and praying for Mum Ilana. Caspurr, your art is terrific! And we will check out the recoring of your mum's concert. How exciting!

Wow, that is some really fine art; worthy of any museum, gallery or the finest shopping arcades across the globe!
Music and cats, a fine combination that we don't get enough of if you ask me – though humans often attempt to sing as well as us they seldom succeed, well not around here they don't, MOL
Purrs & well wishes.
ERin

That is a lovely picture.As the cooler weather comes, it also brings more snuggle time and that's not a bad thing.Relaxing with nun and belly rubs are things I love too :)
Sorry to hear about Smores.I will visit.
Purrs, Julie

LOvely art and we always enjoy seeing you

That art for sure was worthy of being displayed in such an auspicious site...like a public art gallery for any and all to admire!

How cool to have done your concert in a cyber fashion.

Such a sweet snuggly selfie:)

My mommy has always listened to the Caterwauling Club's mewsic. She will again and Caspurr, I think I am in LOVE! You look so handsome! and the collage is something both you and your mummy can be so proud of. Beautiful work by your mummy. Purrs to you both.

We are very sorry to hear about your friend, it's very sad. Your selfie and your art looks fabulous though and I hope y'all remain safe from the virus. Hugs.

The art is beautiful and we so love the pic!

Your art is lovely. I am sorry to hear about your friend and send my condolences.

Darling art and photo! We completely agree, this year has been a nightmare from start to finish.

Sad news about S'mores. I love your art. And I will check out the concert. XO

We love that photo of you, Caspurr...and it made for beautiful art. We are sorry about your friend Smores. Purrs to his family.

You're right, keeping up with cyber friends is important, especially when it's difficult to keep up with everyone in person. You made a wonderful art collection this week. Thanks for sharing the link to the concert. The performance was wonderful and they did a good job at trying to give all the performers some social distance. Was your Mummy on the right side of the choir? I think we recognized her towards the end of the concert.

Another kitty gone to the bridge. That bridge must be crowded. At least in our minds it seems crowded. One good way to look at the kitties leaving us is to look at all the wonderful years they had with us and the fun we all had together.

As for your mom's caterwauling....she can come and hear me caterwauling too. I am known for the siamese high pitch in my voice.