Getting back to Business: (Belated) Rosh Hashana Greetings, Caturday Art and Sunday Selfies

Shimshi here, wishing you Shavua Tov (a Good Week) and Shana Tova (a Good Year).  Yes, on Caturday and Sunday, We celebrated the Mewish Mew Year, Rosh Hashana. We are sorry this is all a bit late, but something furry unfortunate happened the week before last. The computer broke down and Mummy had to take it in to be fixed. It is still quite a new computer. We've only had it for two years, so it was still under warranty. Unfortunately, it seems the hard disk was corrupt and had to be replaced and a lot of stuff was lost (mostly pictures from the last three months which hadn't yet been backed up). Mummy thinks they didn't even try, because as of Friday, We are once more in lockdown and they told her that to try to recover data from the hard disk would take quite a lot of time and even then, there was no guarantee they would succeed, and meanwhile Mummy would be going into lockdown with no computer. She did borrow Grandpaw's laptop, but it is completely useless (says Mummy).  When Mummy has time, She will sit down and see what can be retrieved from "the Cloud". We didn't know that pictures can be kept up the clouds, did you? Does the Great Cat in the Sky look after them?

At any rate, Trixie decided She would guard the laptop, until Mummy has a chance to return it to Grandpaw (whom She can't go to visit because of the new lockdown). 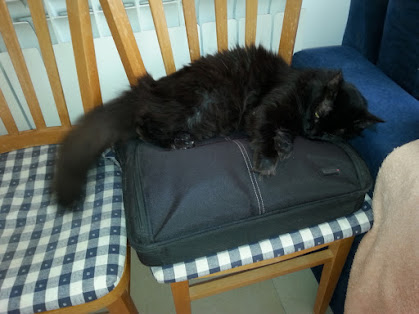 So, Mummy got the computer back on  Thursday evening, but was furry, furry busy pre-purring for Rosh Hashana. And of course, She wouldn't sit down at the computer on Rosh Hashana itself, so this is the furrst chance We have had to blog in a fortnight.

The picture of Trixie guarding Grandpaw's laptop is Our Entry in this week's Sunday Selfies Blog Hop hosted by Our Furriends, the Kitties Blue and their HuMom, Janet.


Here is their badge:

And that wasn't the end of the disasters that have befallen Us this past fortnight. Caspurr got some kind of a wound on the back of his neck (no, I did not bite him!) and although, under normal circumstances, Mummy would have waited a few days to see how it  developed, and whether it was a scratch or a bite or maybe a fungus or some kind of parasite, the impending lockdown made her nervous so She called the v-e-t, who said to bring Caspurr in to see her. But when they got to the clinic, Mummy saw that Our usual lady v-e-t, Dr. Einat, wasn't there and instead, there was a young, good-looking (so Mummy says, though how could She tell, he was wearing a face-mask?) v-e-t called Dr. David. Anyway, he examined Caspurr with a sort of torch that has a blue light at the end, and he said it wasn't a fungus, it might be a scratch and it was getting better already - and he purr-scribed some ointment. Caspurr tells Me he breathed a sigh of relief at getting off so easily - but then, Mummy remembered that Caspurr hadn't yet had his annual shots and so he got stabbed! Caspurr was so brave. The EVIL v-e-t told Mummy that Caspurr was furry frightened. Mummy asked how he could know that, because Caspurr was being as good as gold and not hissing or biting or scratching. Dr. David said he could tell by the way Caspurr's pupils had narrowed. But Caspurr didn't let on and he behaved like the purrfect gentlemancat that he is. My Big Brofur is a True Hero, he is furry, furry brave and I hope I shall always be able to live up to his standards!

Here is a picture of Me and my brofur Caspurr chilling out on the bed. Mummy artified it, so We could use it as Our Entry in this week's Caturday Art blog hop, hosted by the Wise and Beautiful Athena and her HuMum, Marie: 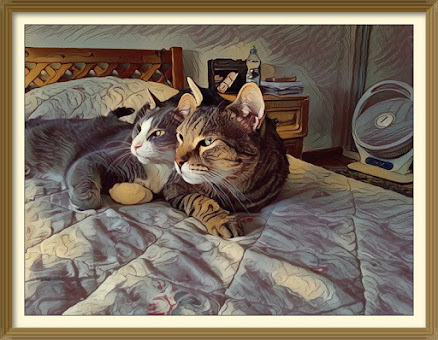 Mummy isn't sure, but She thinks She used the Dark art effect from LunaPic.
And here is the blog hop badge:

Now, all that is left to do before We set off on Our Blog Hopping expedition and visit Our Furriends, is to remind you all that the Evil Chinese Coronavirus is still with Us. Many countries, not only Israel, have expurrienced an upsurge in new cases and are heading for a second lockdown or other restrictions. So make sure your Humans stick to all the rules designed to purrtect them, wear their facemasks, observe social distancing guidelines and keep washing their paws hands.

And let us all purray to the Great Cat in the Sky to make the Evil Virus go away and to send Us all a Good and Sweet Year.

You and Shimshon look so comfy and you get along so well Caspurr (Einstein is right this second hissing at Rumpy who jumped on the desk. Well we all hiss at Rumpy.) Trixie you are doing a good job too. Hope your lockdown ends soon.
PS
After years of losing puters Dad keeps everything on a flash drive. He has a 128Gig.

That's a terrific selfie. Dang, sorry about the computer problems, those are such a pain. I'm sure glad to hear all is okay with Caspurr and your art is beautiful. I hope you had a wonderful Rosh Hashana.

I am sorry for the computer woes and hope it can be fixed. Some areas here are in lockdown where Covid is rising rapidly, but it sounds like we all will be soon.
I am glad the vet visit went well. Your art is lovely.

That is a wonderful artwork (and photo) of you and Caspurr. We back up our computer every night to a portable hard drive. It's in our house (not the cloud), but if the computer goes belly up, we're counting on that hard drive to have all our photos and other important stuff.
Raven is also very nervous at the vet's. She doesn't fuss, hiss or scratch, rather she becomes completely docile and hopes for everything to be over soon. Her vet is very gentle and careful with her and we truly appreciate him for that.
We hope you had a happy New Year.

Your art is gorgeous! I'm so sorry you've been having so many troubles lately :( Purrs headed your way!

You two look so cute together. I am glad Caspurr is OK. L'Shanah Tovah! XO

What a week! We're glad the computer got fixed...otherwise we wouldn't get to see you. And we're glad Caspurr's injury wasn't too bad and is healing. Wishing you all a Shana Tova!

Wow, you guys have had a really rough week! We sure hope the new year is a sweet and healthy one for you. Shana Tova!

Blech...what horrid things have been going on at your den. Hope the new lockdown is not as long or as hard as the first one.

Computer woes are such a big pain.,

You two look so cute together!

Have a great new year! And a nicer week ahead:)